Thomas Tuchel: Paris St-Germain sack manager after two and a half years in charge 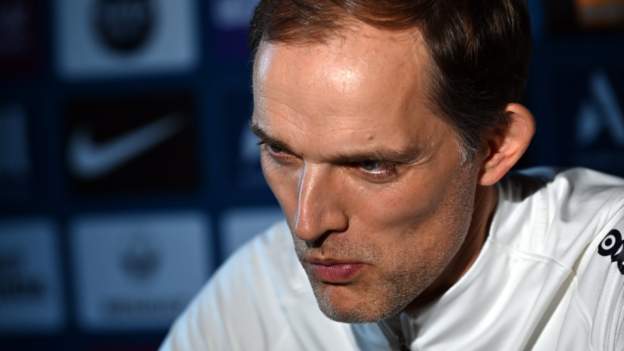 Tuchel took over the Ligue 1 side in June 2018, winning two league titles, the French Cup and French League Cup.

PSG are currently third in Ligue 1, a point behind leaders Lyon, while they are also through to the last 16 of the Champions League, where they will face Barcelona.

The victory moved the reigning champions within a point of both Lyon and second-placed Lille as the Ligue 1 season heads into a two-week winter break.

Former Borussia Dortmund coach Tuchel’s contract was set to expire at the end of this season.

He joined the Parisian club in May 2018 on an initial two-year contract after replacing Spaniard Unai Emery, agreeing a one-year extension in May 2019.

Former Tottenham manager Mauricio Pochettino has been linked regularly with the PSG job in recent months.

Since PSG lost the Champions League final 1-0 to Bayern Munich in August, it’s been a difficult time for Tuchel on and off the pitch.

Towards the end of the summer transfer window, he had a public falling out with the club’s sporting director Leonardo over recruitment.

And earlier this week, he gave an interview with a German TV station saying he felt more like “a sports politician or sports minister than a coach” during his first season at the club.

Tuchel claimed that the quotes had been taken out of context and said “it’s possible they translated incorrectly” but again it hinted at problems behind the scenes.

The players seemed to respond well to him but to the outside world, other relationships at the club didn’t seem so comfortable.

It reminded me of comments once made by Borussia Dortmund chief executive Hans-Joachim Watzke about Tuchel: “Thomas is a difficult person, but a fantastic trainer.”

Meanwhile on the pitch, the team haven’t dominated the French league as they usually do, losing four games to find themselves in third place at Christmas behind Lille and Lyon.

And although they ended up winning their Champions League group, disappointing defeats by Manchester United and RB Leipzig increased the pressure.

His time at PSG may be over but Tuchel’s reputation as a coach means he will be in demand over the next few weeks and months. There’s no doubt that one day he will manage in the Premier League.