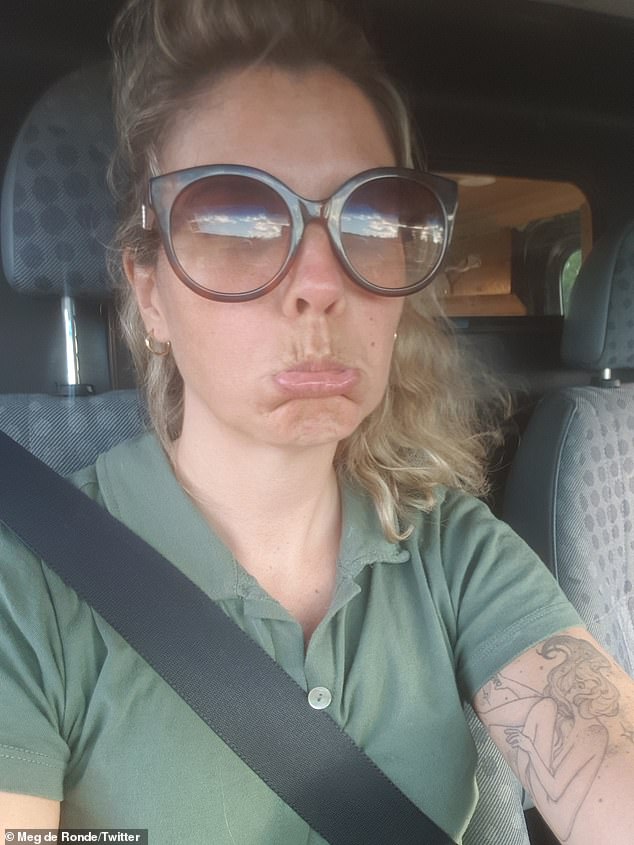 
Thousands of drivers were forced to queue for seven hours to get into Auckland after Jacinda Ardern locked the city down due to just one Covid case.

New Zealand’s largest city entered a week-long Level Three lockdown at 6am on Sunday, forcing  1.7million people to stay at home unless they are shopping or travelling for work.

Checkpoints set up along major highways leading into the city were packed with motorists who spent hours in their cars on Sunday trying to enter the city.

Police told residents to be patient and prepare for ‘significant delays’, but Kiwis described the situation as a ‘mess’ – with some claiming they saw drivers squatting on the side of the road due to a lack of facilities.

Pictured: A woman stuck in hefty traffic took a selfie and posted it to Twitter on Sunday afternoon

Pictured: Traffic jams on the highway heading in to Auckland in New Zealand, as residents wait at Covid checkpoints

One man who tried to make the two-hour trip from Hamilton to Auckland spent double that time just getting to the halfway point near Meremere.

Another spent three hours stuck in the same spot in Hampton Downs – just 44 minutes away from the city centre.

While pet owners and livestock truck drivers took to exercising their animals on the side of the road, residents with sick passengers were furious about the hefty delays.

One woman travelling with her terminally ill husband attempted to drive from Hampton Downs to Pokeno, about 45 minutes out of Auckland.

It took the couple four hours to drive little more than 5km down the road when the trip which should have taken 12 minutes.

Pictured: Lines of traffic on a motorway heading in to Auckland in New Zealand after the city was plunged in to Stage Three lockdowns

Some people stuck in traffic said they could hear babies crying from cars nearby. ‘I feel sorrt for the poor babies and their families stuck in this heavy traffic’ one Twitter user said

‘What a joke!’ she told the publication.

‘We are heading into Auckland not out. How are the elderly and terminally ill supposed to cope with this?

‘We have seen people toileting on the side of the road, heard a poor baby crying. What the hell.’

The woman said health authorities told her to be ‘patient’, but added: ‘[I’d] like to see Jacinda sitting in a car in this heat with a terminal husband whose medication is now well overdue and in pain’.

A mother and her four-year-old were stuck in traffic for seven hours with no access to water, as they watched children run across the motorway to relieve themselves.

Police warned motorists that they would be stopped and questioned about why they were travelling once they reached a checkpoint.

Pictured: A Google Maps image showing heavy traffic on highways leading in to Auckland on Sunday

Some residents were confused about why people from outside Auckland, where there are no Covid cases, are being screened so heavily. ‘Explain the logic behind not being able to come in to Auckland,’ one woman tweeted

But drivers claimed the level of questioning was not consistent.

One man said the resident in the car in front was questioned and asked to prove they lived in Auckland, but he was immediately given the all-clear when he arrived at the checkpoint.

A woman from Hamilton claimed an officer threatened to block her from going through because the only way she could prove where she lived was with her driver’s licence.

She asked them to scan her registration plates as proof of residence but the cop’s device was out of battery.

The couple were eventually allowed to drive through the checkpoint.

Meanwhile, a man who travalled in to Auckland from the north was allowed in after a 12-second conversation with police.

Prime Minister of New Zealand Jacinda Ardern (pictured) has announced Auckland will go into lockdown for one week, after just one new local case of Covid-19

The rest of New Zealand faced Level two restrictions from Sunday at 6am. Pictured: Testing station in Auckland on February 15

‘I’m cruising back up north and have been through two of these roadblocks now and the first one they wanted a lot of proof and today they asked me, “where are you going?” and I said “I’m going home”, which is true, and he just waved me on,’ he said.

Auckland’s restrictions are in response to a new locally-transmitted case Ms Ardern said could not be directly connected to other positive tests over the past two weeks, although a school in South Auckland was a common link.

The infected man, 20, went to the GP for a Covid test on Friday afternoon but then went to the gym – which Ms Ardern said was ‘frustrating’.

‘People who should have been in isolation, weren’t,’ she said of the country’s recent outbreak in February.

‘Unfortunately, we have still had breaches of requirements in this case.’

Auckland’s latest cluster is centred around Papatoetoe High School, and the new case is the older brother of a student at that school.

The mother of the siblings has also tested positive for Covid-19.

The cluster is centred around Papatoetoe High School, and the new case, a 21-year-old male, is reportedly the older brother of a student at that school. Pictured: A Covid-19 station set up outside the high school on February 15

Level three restrictions mean people are confined to their household bubble or an exclusive extended bubble – which may include close relatives or isolated people. Pictured: Empty Auckland streets during lockdown in August, 2020

However, Ms Ardern said that student has tested negative for coronavirus multiple times.

‘That means we have no current known link for the case discovered this afternoon,’ she told the media on Saturday afternoon.

‘If we cannot immediately link a case person to person, what we call it an epidemiological link, that is a significant issue, and one we need to act on.’

The rest of the country will face tightened public gathering rules under Level Two restrictions.

Level Three restrictions mean people are confined to their household bubble or an exclusive extended bubble – which may include close relatives or isolated people.

People must work from home if possible and businesses must not offer services requiring close personal contact, unless it is an essential service or emergency.

Public venues are closed but low-risk recreation activities are allowed within bubbles, such as bike riding, swimming or going on a picnic with other household members.

For the rest of New Zealand under Level Two restrictions, people can socialise in groups of up to 100, shop and travel domestically.

The newest case is the older brother of a student at Papatoetoe High School (pictured), where the south Auckland cluster originated

Schools will remain open and groups over 100 are allowed in cinemas, casinos and stadiums as long as groups of 100 and less do not mix with each other.

Ms Ardern said she was disappointed in those who have not followed the rules and put the community at risk.

‘We do have the ability to take enforcement action if we need to,’ she said adding that people needed to feel comfortable coming forward.

‘We still need an environment where people will speak up and come forward and be tested.’

The latest restrictions come after the city of 2million people entered a three day lockdown on February 15 when three people from one family – a Papatoetoe High School student and her parents – tested positive for Covid-19.

The city was thrown into a level three lockdown while the rest of the country was placed under level two restrictions.

The mother worked at LSG Sky Chefs, an airport laundry and catering facility at Auckland airport, while the daughter was a student at Papatoetoe High School.

New Zealand has been widely praised for its handling of the pandemic, with just 26 deaths in a population of five million.

America ... a surgeon performs an operation on a patient during his trial via videoconference