Thousands of fans in Norwich, Hull and Peterborough flock to the streets to celebrate promotions


Norwich City, Hull City and Peterborough United supporters have taken to the streets to celebrate their promotions on Saturday evening, with Canaries boss Daniel Farke captured rejoicing with supporters with little social distancing.

The UK Government has eased lockdown measures in recent weeks with the opening of pubs and shops, however strict social distancing guidelines remain in place in which people who you do not live or bubble with must remain two metres apart.

In England, if it is not possible to remain two metres apart, the advice is to stand at least one metre apart but with extra precautions in place, such as the wearing of face masks.

However, supporters of Norwich, Hull and Peterborough have been captured not observing the Government guidance in the midst of celebrations after the former’s promotion to the Premier League while the latter two have secured promotion to the Championship. 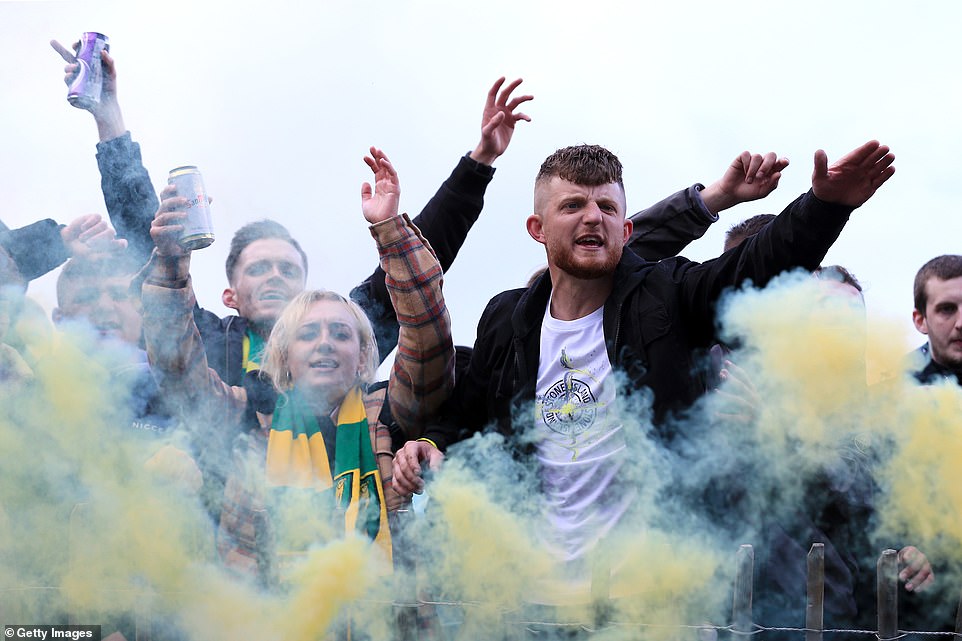 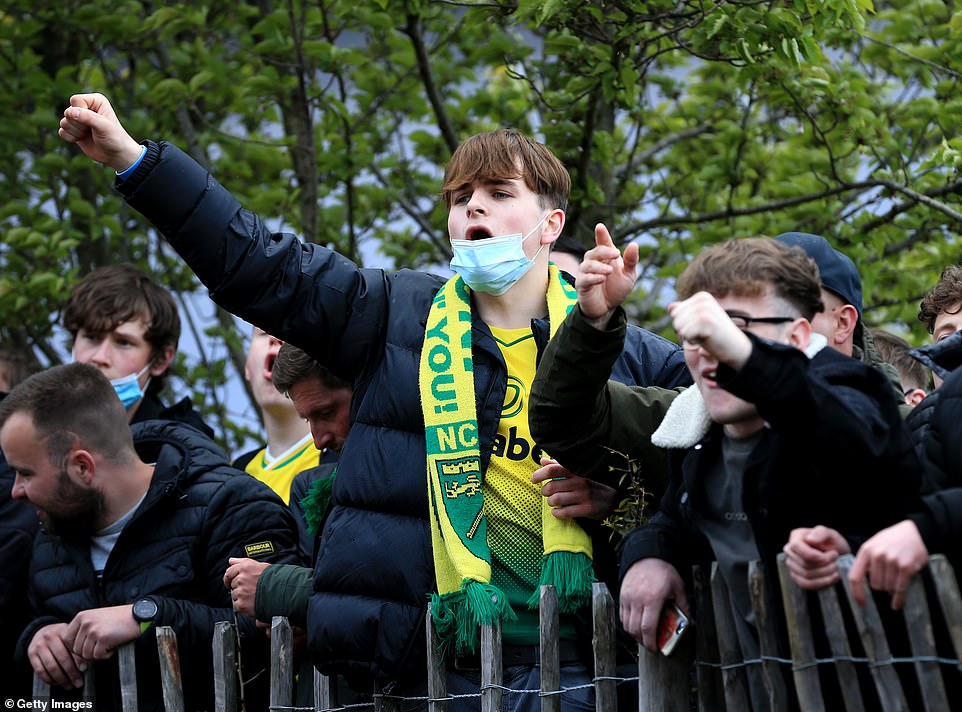 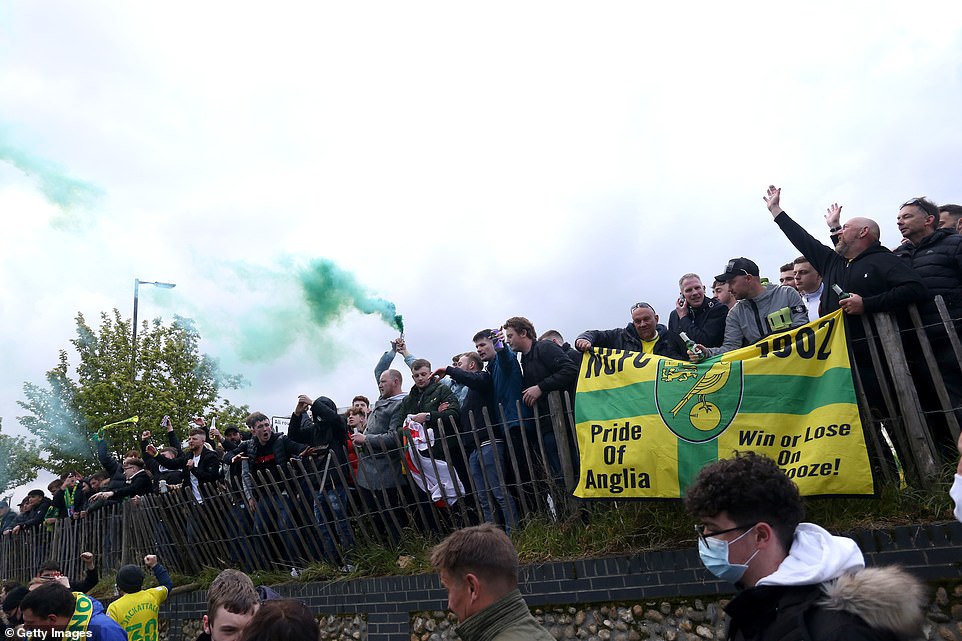 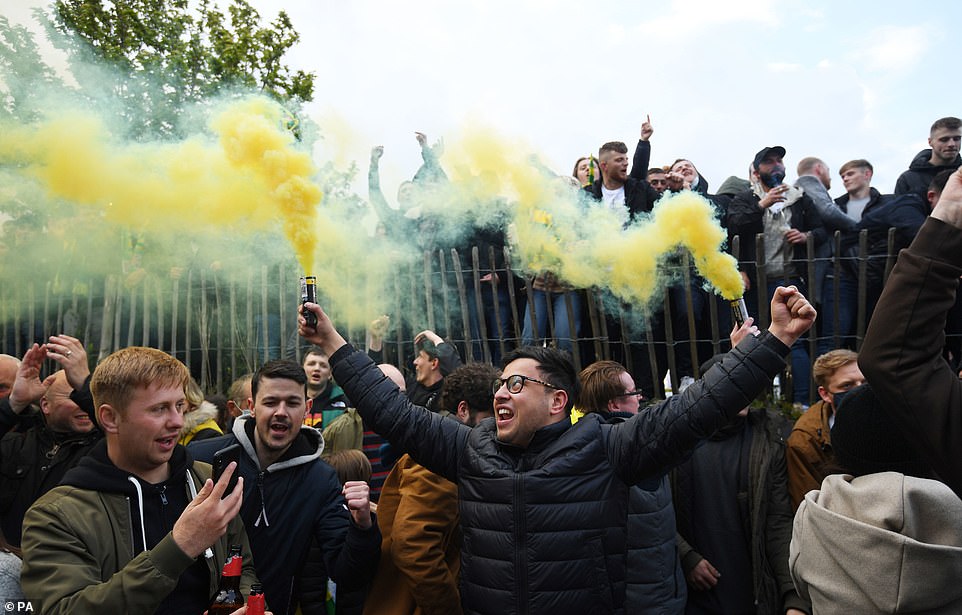 People who are not living or bubbling together must remain two metres apart, or over one metre if not possible to remain two 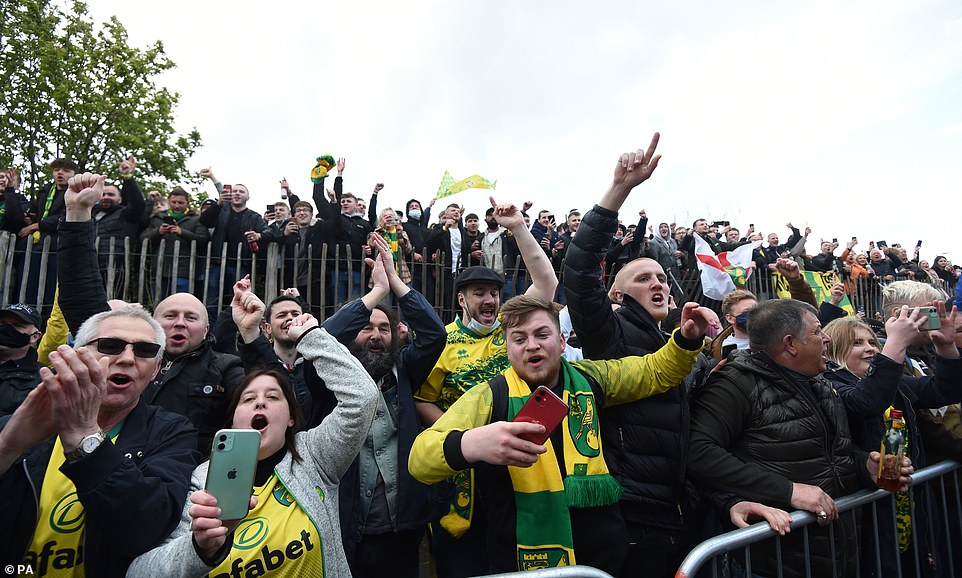 However, Canaries fans were seen gathered in close proximity with no social distancing and very few wearing face masks 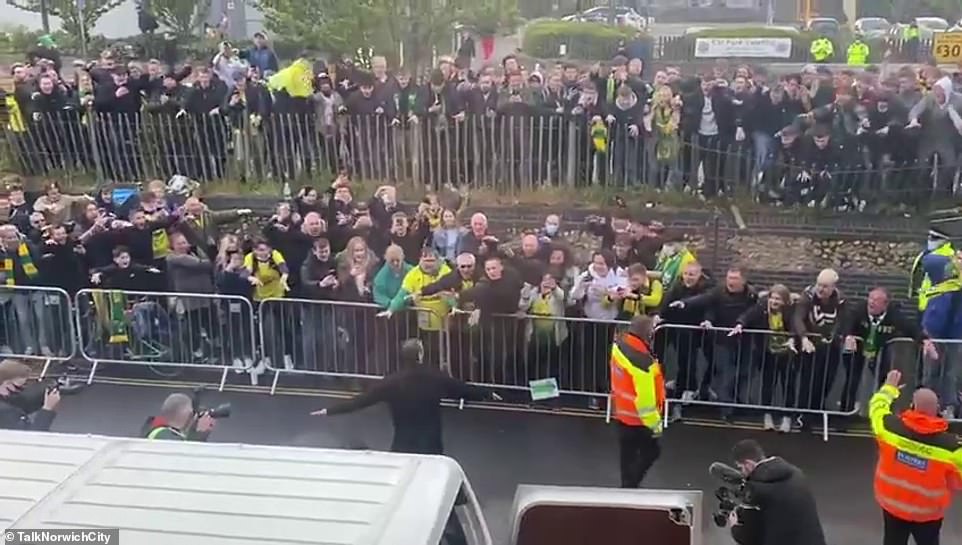 A video posted to Twitter shows Canaries fans gathered together outside Carrow Road following the side’s 4-1 win over Reading on Saturday.

Manager Farke is seen emerging in front of the jubilant crowd as the German led the fans in unison. Norwich fans also let off green and yellow flares amid a buoyant party atmosphere having secured an immediate return to the top flight as champions.

Meanwhile, Hull and Peterborough fans gathered in their masses as the duo secured Championship football for next season.

The Tigers had already secured promotion before Saturday’s 3-1 win over Wigan Athletic, but the victory mathematically confirmed the club as champions of the third tier. 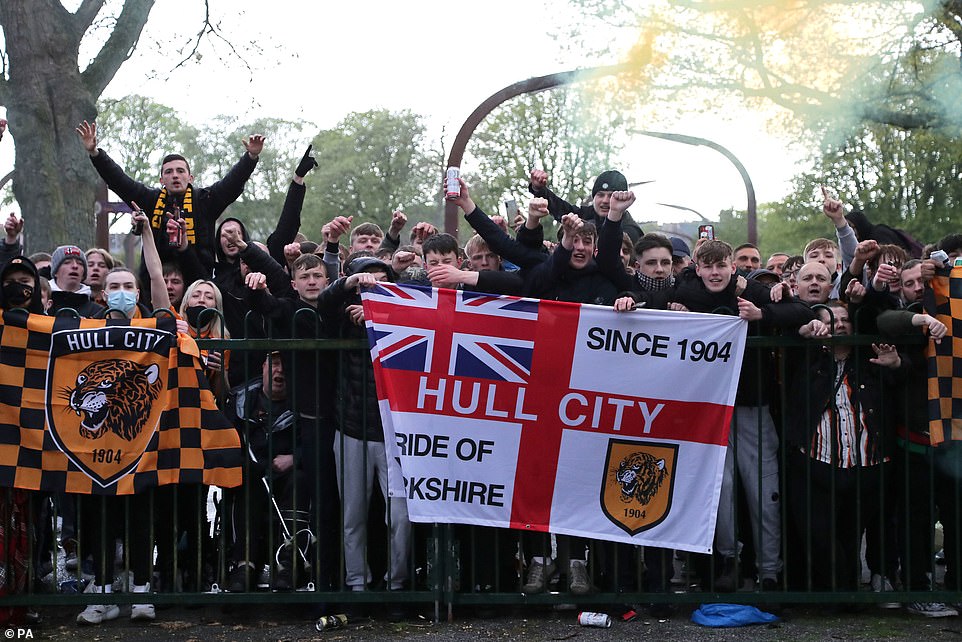 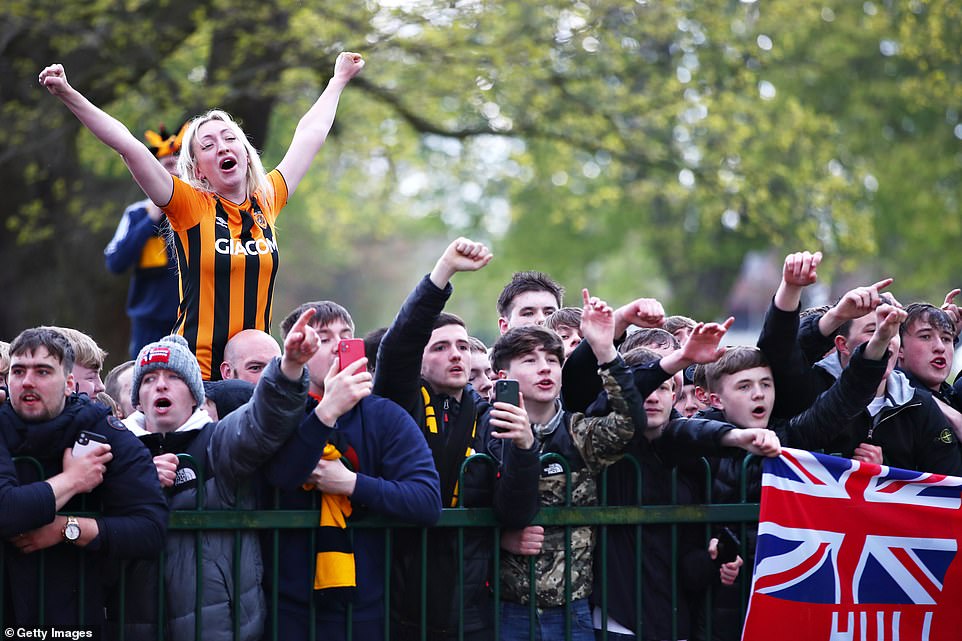 Hull’s win over Wigan Athletic confirmed them as champions of League One, sealing an immediate return to the second tier 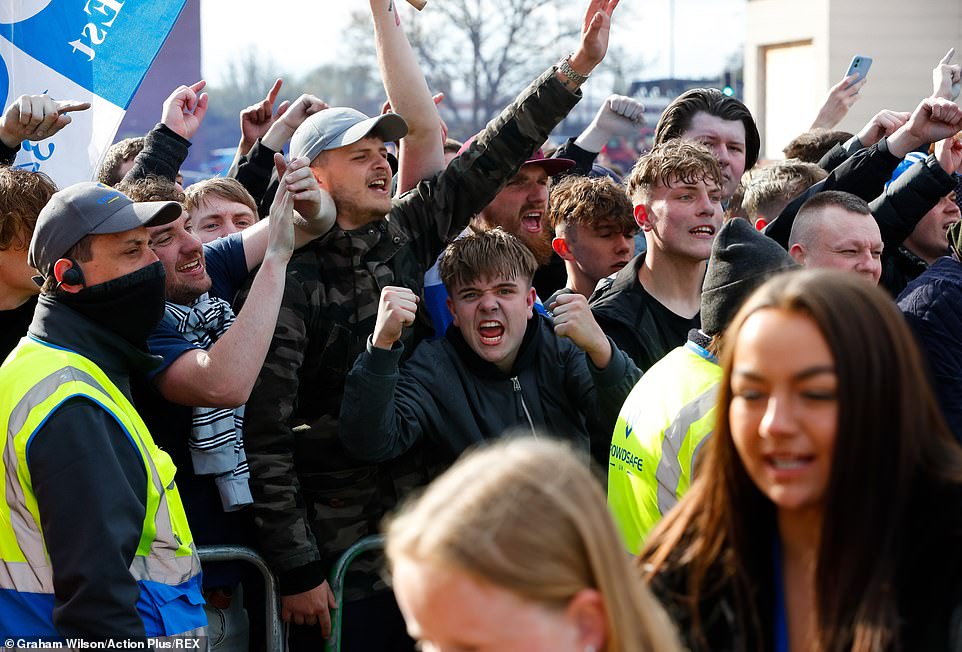 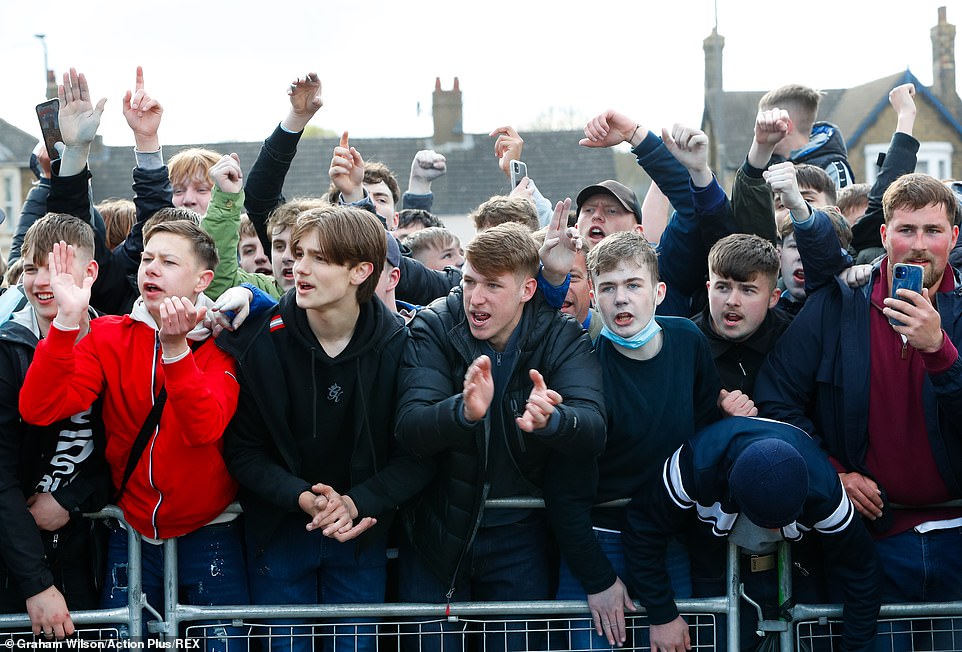 A number of supporters gathered outside the KCOM following Grant McCann’s side’s victory, having suffered a miserable 2019-20 campaign that sent them packing from the second tier, just three years after enjoying Premier League football.

Peterborough fans gathered outside the ABAX Stadium to celebrate their return to the Championship after eight years in League One, with their 3-3 draw with Lincoln City giving them an unassailable lead over promotion-chasing Sunderland.

Norwich were crowned champions while Sheffield Wednesday survived to set up a grandstand finish on the penultimate weekend of action in the Sky Bet Championship.

With promotion already sealed, Daniel Farke’s Canaries were in celebratory mood as they thumped Reading 4-1 at Carrow Road despite falling behind to Josh Laurent’s 12th minute header.

Kieran Dowell’s double either side of the interval and late strikes from Xavier Quintilla and Teemu Pukki sealed the hosts’ coronation in style. 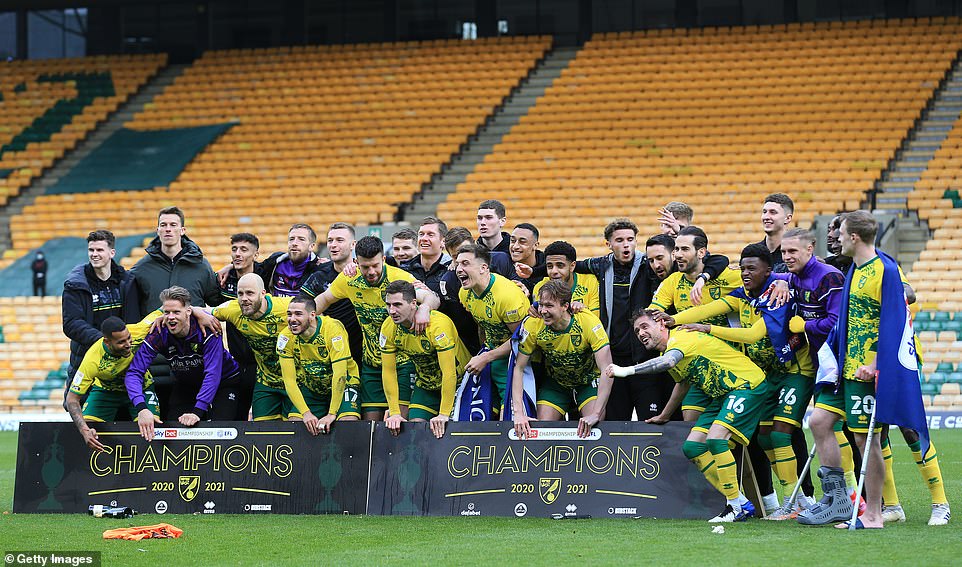 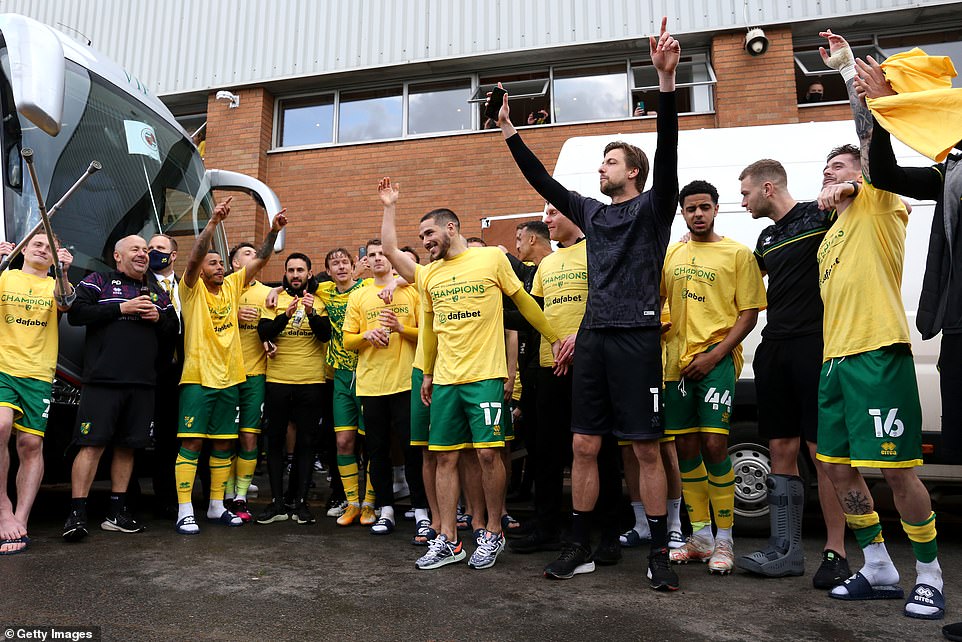 But the real action was at the bottom of the table where Wednesday’s goalless draw in the early kick-off against Nottingham Forest meant they would be relegated if Derby secured at least a point at Swansea.

But Wayne Rooney’s men slumped to a 2-1 defeat – their sixth in a row – setting up a crunch Pride Park clash between the Rams and Wednesday next weekend, when the visitors must win to stand a chance of staying up.

Derby led through a 48th-minute header from Tom Lawrence but Morgan Whittaker levelled just past the hour mark and Connor Roberts struck the winner three minutes later for the Welsh side. 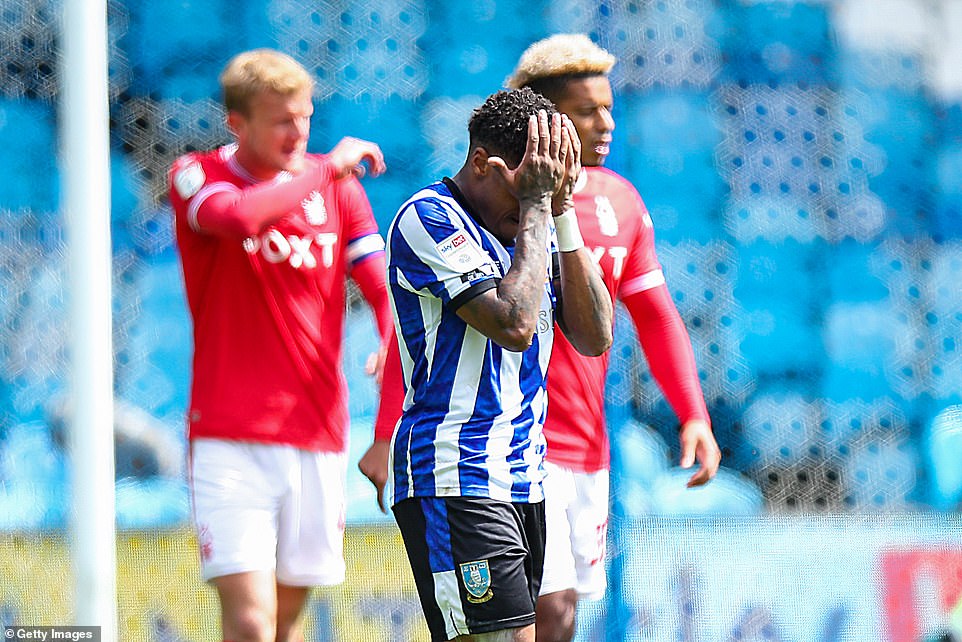 The relegation conundrum is further complicated by Rotherham, who boosted their hopes of staying up after Lewis Wing’s late equaliser in a 1-1 with Blackburn.

The point for the Millers, after Adam Armstrong’s early goal for the visitors, means their own fate is back in their own hands, although they need at least three points from their last two away games at Luton and Cardiff to stand any chance.

Uche Ikpeazu’s fourth-minute effort gave Wycombe a 1-0 win over Bournemouth and ensured Gareth Ainsworth’s men also avoided relegation, although they need a mathematical miracle to extend their stay in the second tier. 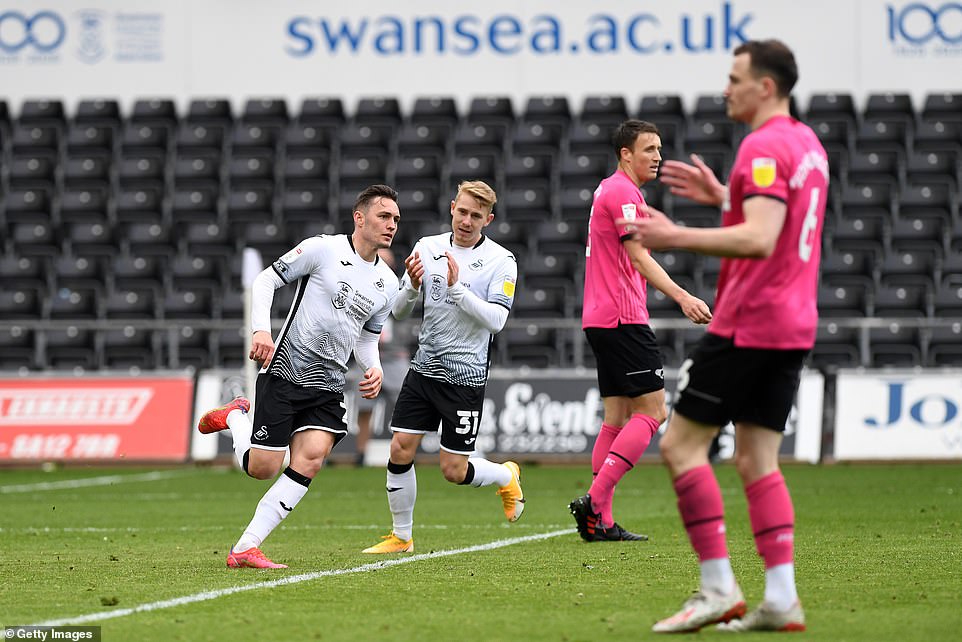 However, Wayne Rooney’s strugglers slumped to a 2-1 defeat – their sixth in a row – against Swansea City at the Liberty

Hull claimed the Sky Bet League One title with a 3-1 home win over Wigan, while Peterborough fought back to draw 3-3 against rivals Lincoln and secure their own promotion.

The Tigers – already made sure of their place back in the Championship after beating Lincoln last weekend – went in front through Keane Lewis-Potter’s header in the 17th minute, but Joe Dodoo soon had Wigan level.

Hull, though, were back in front again in the 22nd minute through George Honeyman and Josh Magennis wrapped things up with a third in the second half. 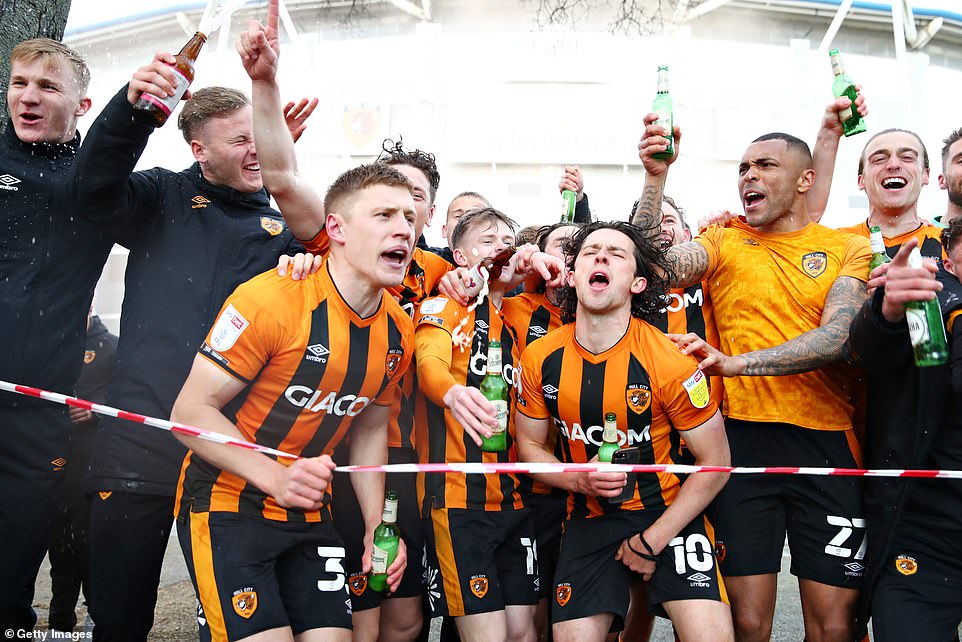 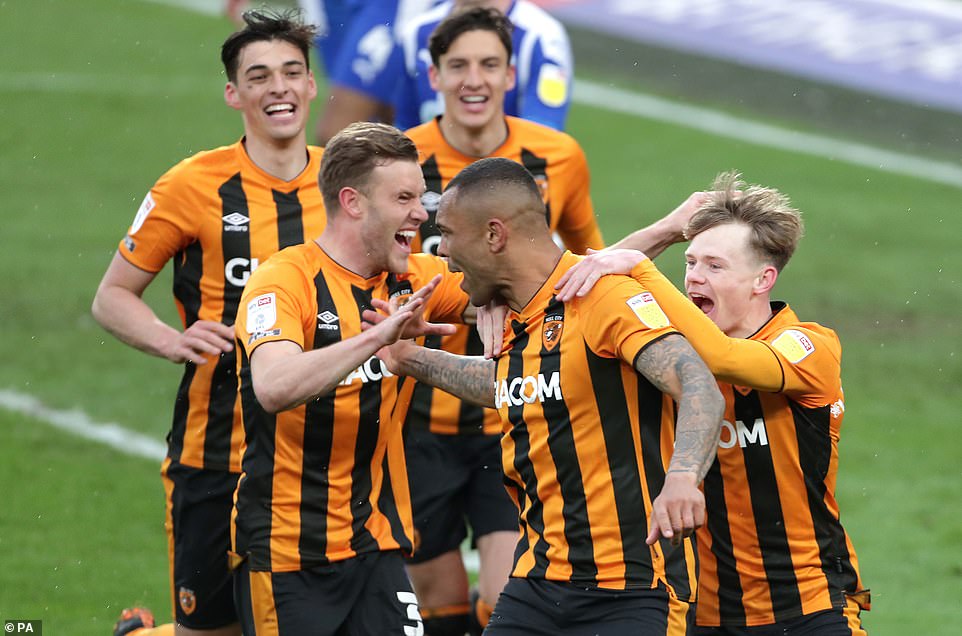 Peterborough fought back from 3-0 down to grab a dramatic draw and secure promotion with a penalty from Jonson Clarke-Harris deep into stoppage time.

Imps midfielder Anthony Scully broke the deadlock on the half-hour, with Jorge Grant adding another from the penalty spot just before half-time.

Scully got his second in the 53rd minute to seemingly leave Posh’s promotion party on hold.

However, Siriki Dembele started the fightback before Clarke-Harris set up a tense finale with a 75th-minute free-kick – and then kept his cool from the penalty spot deep into stoppage time.

At the other end of the table, Rochdale were relegated after they were beaten 2-1 at home by Doncaster, while Northampton are also down following a 3-0 defeat by Blackpool. 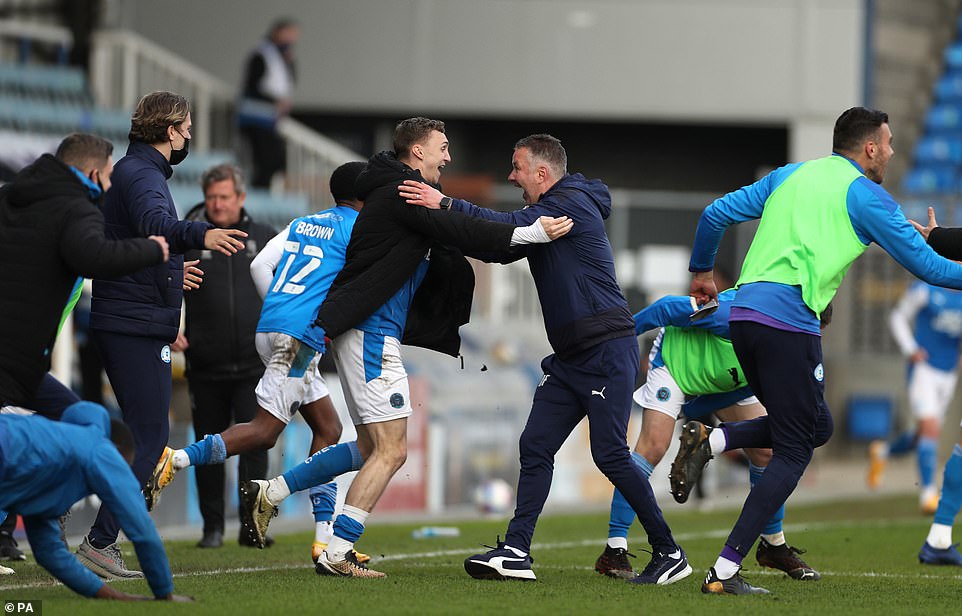 Taylor Richards struck in each half to put Doncaster in control and although Matt Done pulled a late goal back, it was not enough to save Dale.

Sunderland move above Lincoln into third after they won 3-1 at Plymouth.

Ross Stewart gave the Black Cats the lead in the 21st minute, but the Pilgrims were level just after the hour through defender Joe Edwards. 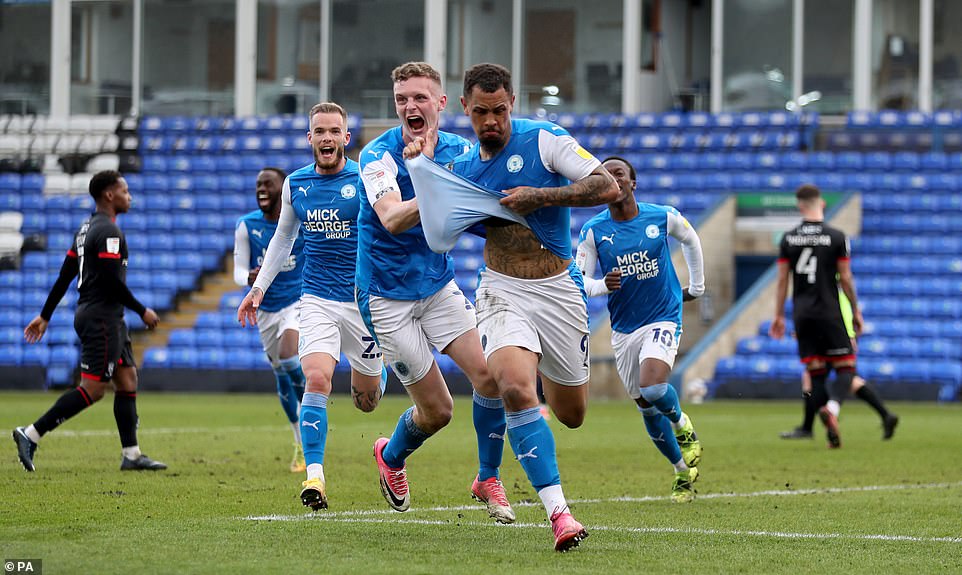 Plymouth, though, were reduced to 10 men in the 64th minute when Jerome Opoku was dismissed for a second caution.

Chris Maguire converted a penalty with six minutes left and Denver Hume added a third in stoppage time. Portsmouth kept up their own play-off push with a 3-1 win at AFC Wimbledon.

Joe Pigott had given the Dons the lead in the 23rd minute, but it was short-lived as Ronan Curtis quickly equalised. Defender Lee Brown then struck twice just before half-time to put Pompey in control.

Southend have been relegated from the Football League for the first time in the club’s history, dropping out of League Two despite a 2-1 victory at Barrow.

The Shrimpers needed to win and hope either Scunthorpe or Colchester lost to retain hope of avoiding joining bottom side Grimsby in the National League next season.

They played their part as goals from John White and Terrell Egbri saw them hit back to win at Holker Street after Scott Quigley’s opener, but results elsewhere meant it was not enough.

Colchester ensured their survival with a 1-0 victory over nine-man Salford that dealt a huge blow to the Ammies’ play-off hopes. 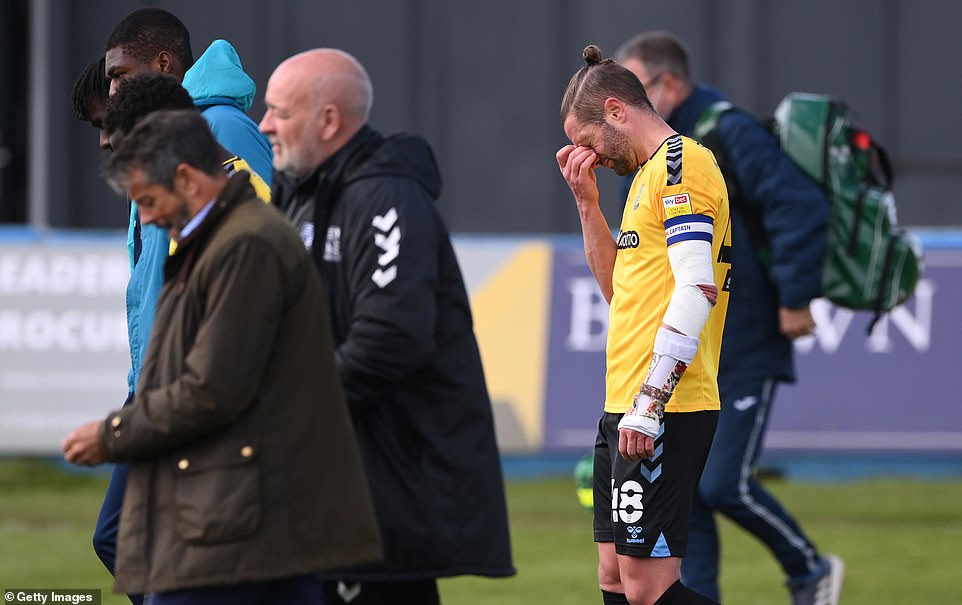 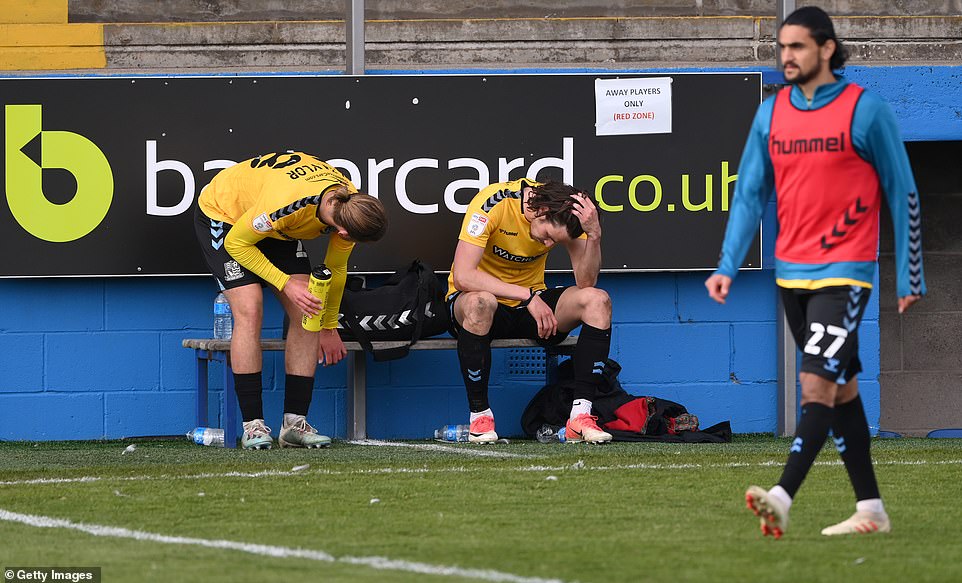 Substitute Joshua Bohui scored their winner six minutes after coming off the bench. Salford, who had Di’shon Bernard and Ashley Hunter sent off, slipped from the final play-off position of seventh to ninth but they do still have an outside chance of sneaking back in on the last day.

Scunthorpe could also celebrate staying up after a goalless draw at Bradford.

Third-placed Bolton missed the chance to secure promotion as they slipped to a last-gasp 2-1 defeat at home to play-off chasing Exeter, who climbed to eighth.

Pierce Sweeney headed the Grecians’ winner in the last minute, completing a comeback after Randell Williams had cancelled out Gethin Jones’ 15th-minute effort.

Fourth-placed Morecambe closed within a point of Bolton with a 2-0 win at Walsall. Yann Songo’o and Cole Stockton claimed their goals. 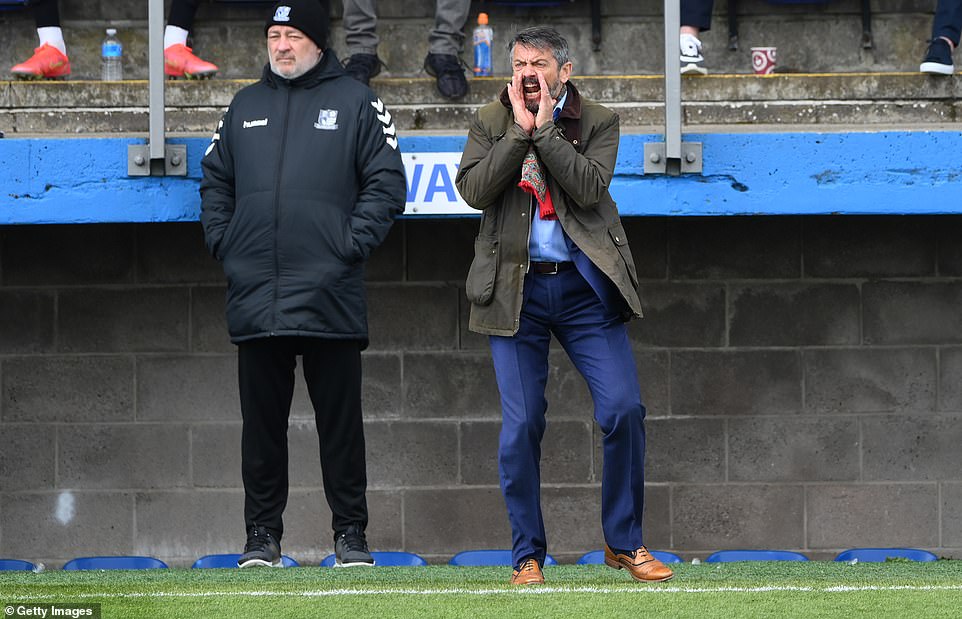 Leaders Cheltenham are already promoted but missed the chance to clinch the title as they lost 1-0 away to another side in the play-off hunt in Newport. Joss Labadie scored what proved the winner after just four minutes, lifting the Welsh side to fifth and needing only a point to reach the play-offs.

Forest Green climbed into the top seven with a 2-1 home win over Tranmere despite finishing with 10 men. Joshua Davison scored their opener after 50 minutes but Ebou Adams was sent off soon after.

Aaron Collins settled nerves with a penalty nine minutes from time although Kieron Morris scored a late reply for Tranmere, who slipped to sixth.

UPS AND DOWNS IN THE ENGLISH LEAGUES

Abuse of gymnasts reported at Australian Institute of Sport over decades

FDA commissioner suggests Pfizer vaccine may not be approved today

Listening to ‘earworm’ songs before bed is disruptive to sleep, study finds