SAN DIEGO – The U.S. Open bills itself as the toughest tournament in golf, a pressure-filled cauldron designed to push players to the limit and identify the strongest one. As the new marketing campaign goes, “From many, one.”

But there seemed to be a lid on that cauldron for most of Saturday afternoon at Torrey Pines Golf Course for one of the overnight co-leaders, Russell Henley. While England’s Richard Bland slowly slid down the leaderboard while shooting 77, Henley never reached higher than 6 under or lower than 5 under where he started.

The even-par 71 was a classic, grind-it-out U.S. Open round for the 32-year-old former All-American at the University of Georgia. With 18 holes to go, he is now tied for the lead with Canada’s Mackenzie Hughes and South Africa’s Louis Oosthuizen at 5 under.

“I think I learned I can do it,” Henley said after signing his card. “(It) definitely wasn’t a perfect back nine, but (I) hit a lot of good shots, a lot of good recovery shots. Felt like I was thinking well. Just a little better execution. (I’m) definitely capable of playing better, and I think I can do it, and we’ll see.” 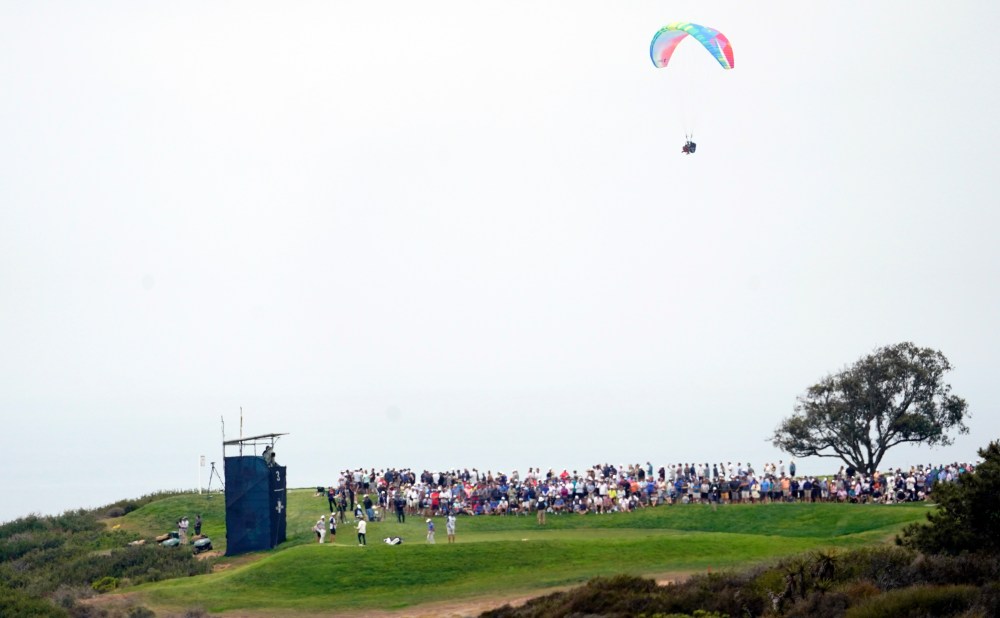 Hughes, whose lone victory on the PGA Tour came at the 2017 RSM Classic, was plodding along through much of the day like Henley, waffling between 1- and 2-under par. Then, from the back of the 13th green, the Canadian did a Tiger Woods impression and holed a 63-foot eagle putt. It vaulted him to 4 under, a shot behind Henley. But a birdie on the par-5 18th pushed Hughes into a tie atop the leaderboard at 5 under.

“I don’t think I’m ever surprised when I play well,” Hughes said. “I wouldn’t say I necessarily expected to be in the last group this week, but I know that my game is good enough to win on the PGA Tour. I’ve done it before. This is a bigger stage, but again, it’s the same. You do the same things.”

Oosthuizen, who finished second to Phil Mickelson at last month’s PGA Championship, was 2 over on the day before he birdied 16 and then drained a 51-foot eagle putt on the 18th to join Hughes and Henley at 5 under.

“I think a year ago that would have been a very boring eagle with a few people going nuts,” Oosthuizen said. “But that was nice to see everyone back, having fans back, and those reactions don’t happen all the time, and it’s great to hear the crowds.”

Meanwhile, a pair of former U.S. Open champions who play the modern power game made their move Saturday.

Rory McIlroy, the 2011 U.S. Open winner at Congressional Country Club, shot 67 to reach 3 under par, two shots behind the leaders.

“It’s definitely the best that I’ve played this week,” Rory said. “I felt like I played well on Thursday, and 70 felt like the worst I could have shot. A little scrappy yesterday, but then today, I hit a lot of fairways starting out, hit a lot of greens, gave myself a lot of birdie chances. (I) didn’t actually make that many, but I just stayed really patient knowing that, if you’re not making bogeys out there, you’re not losing ground.” 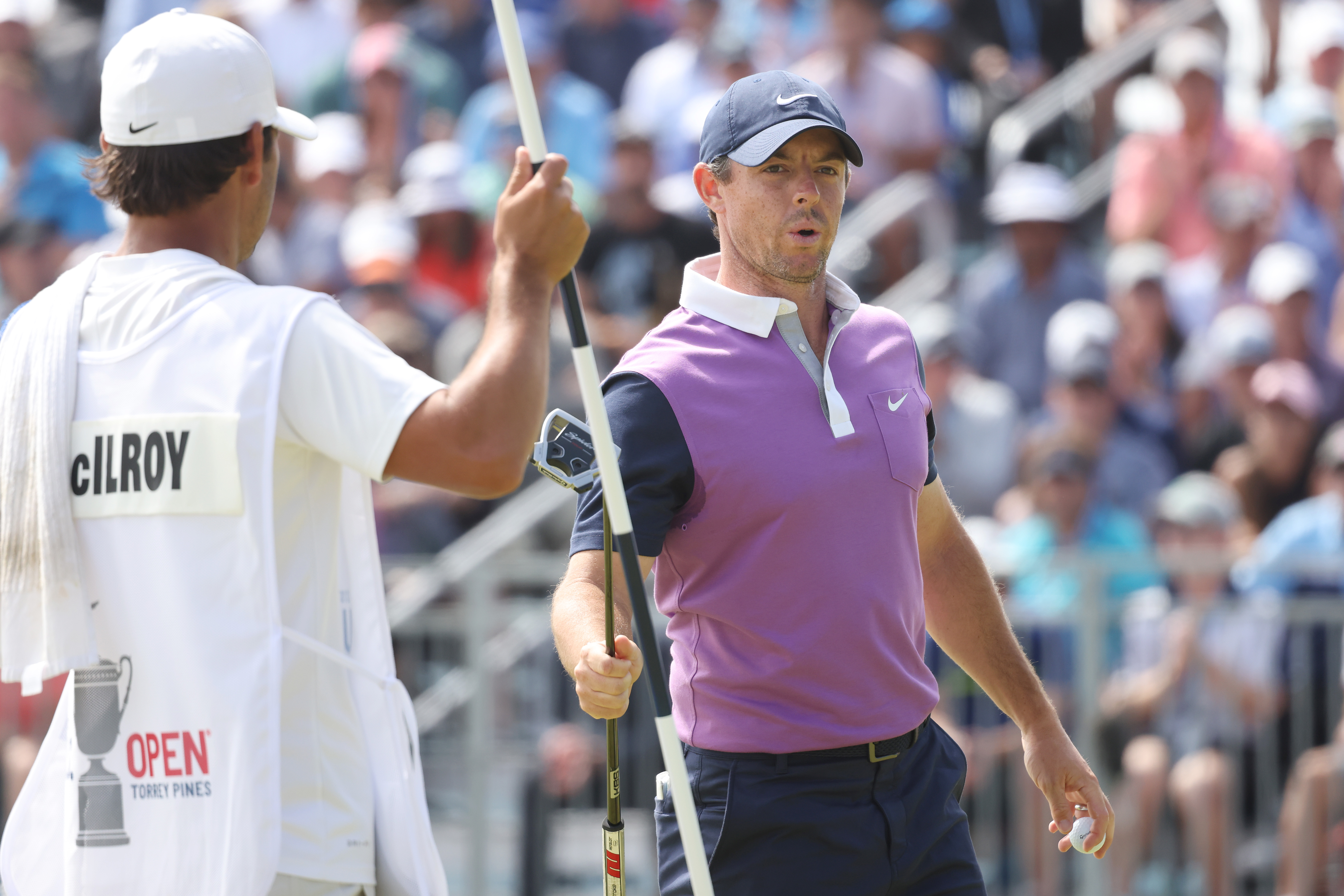 Rory McIlroy reacts with caddie Harry Diamond after putting out on the 17th hole during the third round of the 2021 U.S. Open at Torrey. (Photo by Harry How/Getty Images)

McIlroy, in fact, made up quite a bit of round on Henley Saturday, going from six shots behind the overnight co-leader to just two shots behind with 18 more holes to play.

“I’ve always thought that in order to win big, big tournaments you’ve got to be able to hit it dead down the middle of the fairway, make a lot of great swings into the middle of greens and make putts,” DeChambeau said Saturday. “You can definitely do it that way, but for the way the courses that have been set up recently, there is a way to win others. Hitting it as far as you can, sometimes hitting in the fairway, sometimes not, and hopefully get lucky lies out of it and you can get clear shots to the green. If you can miss it in the right spots, you can contend in major championships doing that. Depending on the course.”

Three more power players will start Sunday’s round at 2 under. Scottie Scheffler (70), Jon Rahm (72) and Mathew Wolff (73) all still have a realistic chance to win their first major championship.

Phil Mickelson doesn’t need a trophy to be the (second) best U.S. Open player of his generation

Rory McIlroy is feasting on chicken sandwiches at the U.S. Open and hungry for another major

U.S. Open: What early finishers are saying about Torrey Pines and the test on ‘Moving Day’