A woman and two men have been discovered with their hands hacked off by a feared Mexican drug cartel which accused them of stealing.

Panicked locals said the group were dumped from a vehicle alongside a bag containing their severed limbs and a note, signed by the notorious Jalisco Nueva Generación Cartel. 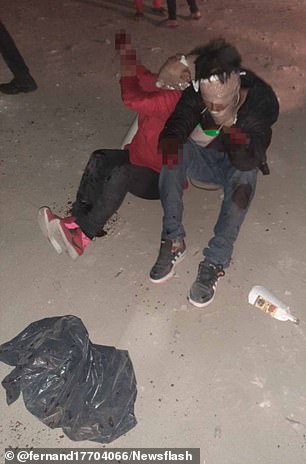 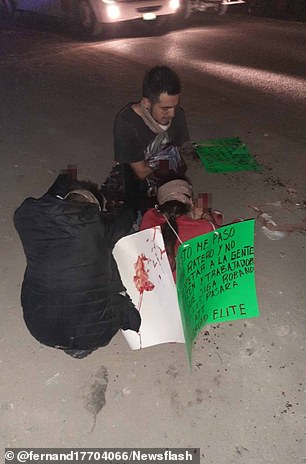 A woman, aged 22, and two men aged 23 and 25, were found dumped beside a highway in Mexico while blindfolded and bound, with their hands hacked off

The note says: ‘This happened to me because I am a thief who does not respect good, hard-working people.

‘Whoever continues to steal, this will happen to them.’

The note was signed with the initials CJNG, which stands for Jalisco Nueva Generación Cartel, considered by many to be Mexico’s most-dangerous cartel.

The victims were blindfolded, and had their hands and legs bound together to stop them from escaping.

Their wrists had also been tied using ligatures to stop them from bleeding to death.

Locals called paramedics, who took the trio to hospital in a serious condition.

Medics also took the severed hands in a bag of ice, in the hopes of being able to reattach the limbs since the wounds were fresh, El Universal reported.

The trio told medics that they had been kidnapped from the local area in a vehicle that none of them recognized, according to El Debate.

The group added that they had been beaten in addition to having their limbs severed. One man gave his name as Ricardo while the woman gave her name as Dulce, saying them came from the local area. 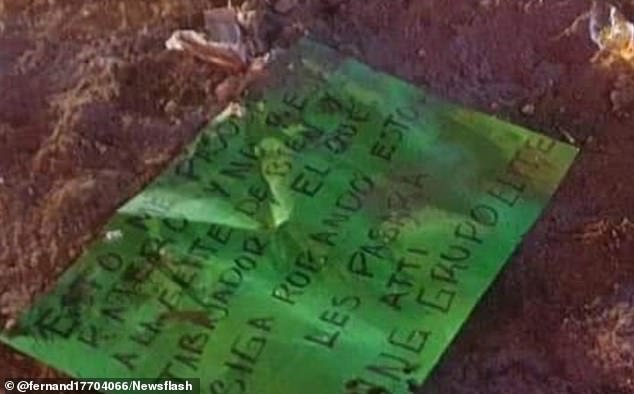 The attackers left a note which says: ‘This happened to me because I am a thief who does not respect good, hard-working people’ and signed by the Jalisco Nueva Generación Cartel

The second man was unable to give his name.

Police also arrived at the scene, where they collected evidence and opened an investigation – though have not yet identified any suspects.

Jalisco Nueva Generación started off as a splinter of the Milenio Cartel, before taking over its former paymasters and establishing drug-running territory that runs coast to coast across Mexico.

The cartel gained notoriety after being hired by El Chapo’s Sinaloa Cartel as foot soldiers in their war against the Los Zetas cartel.

Known for their ultra-violent tactics, members of the CJNG are thought to have cannibalized some of their victims in the past as part of an initiation rite.

The cartel are now thought to be the second-most powerful in Mexico, after the Sinaloa itself, and are listed as a foreign terror organization by the US.

In the state of Guanajuato, where the mutilations took place, Jalisco Nueva Generación is involved in a turf war with the the Santa Rosa de Lima Cartel.

Jalisco leader Nemesio Oseguera Cervantes is Mexico’s most-wanted person after the arrest of El Chapo, and one of America’s most-wanted.

A $10million bounty is being offered for information leading to his capture.

Pippa Middleton is 'pregnant with second child' and 'thrilled'