These are the terrifying scenes as three RNLI lifeboats battled 20ft waves and force eight winds to prevent a stricken 4,000-tonne cargo freighter from being dashed upon the rocks during Storm Barbara.

The Lily B declared an emergency on Tuesday afternoon after it lost all power off the Irish east coast and was being pushed towards the rocks at Hook Head lighthouse on the Wexford coast.

The lifeboat crews attached lines to the stricken vessel and prevented it from being pushed onto the shore while a tug was sent to the scene in what turned into a 12-hour rescue operation.

The volunteer lifeboat crews in Dunmore East, Kilmore Quay and Rosslare Harbour went to the rescue when the cargo freighter, which was carrying coal from northern Germany, requested urgent help at 3pm.

Without any power to navigate the stormy seas the Lily B, with a crew of nine, had been pushed within half a nautical mile of the rocks of Hook Head.

The scenes came as Storm Barbara wreaked havoc across the UK with 65mph gales after battering Spain and Portugal this week.

A fortnight’s worth of rain fell in three hours on Wednesday as the Met Office issued yellow weather warnings for downpours across the south coast, the Midlands, London and East Anglia. 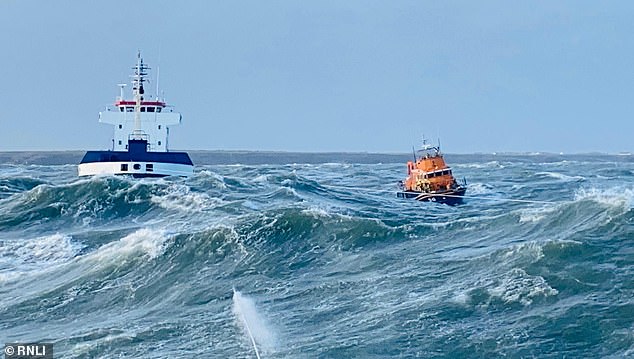 Three RNLI lifeboats were involved in a major operation to prevent the 4,000-tonne Lily B from being dashed against rocks on the Irish east coast after the freighter lost all power during Storm Barbara

The RNLI explained that its lifeboats are 42 tonnes compared with the 4,000-tonne freighter 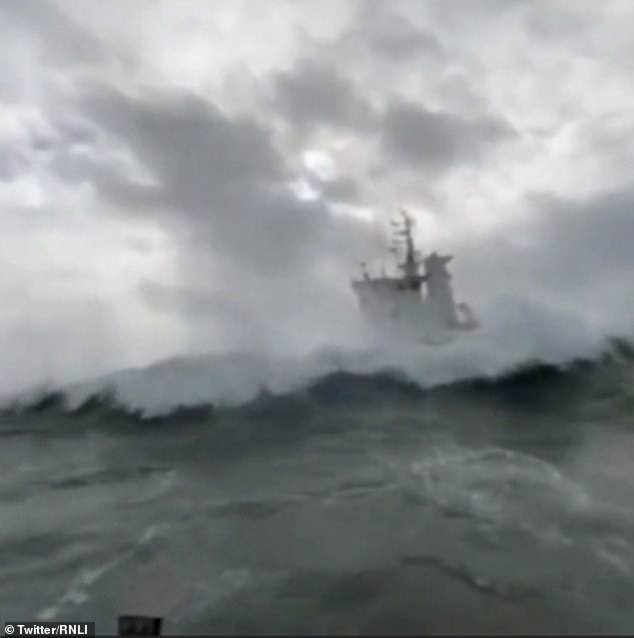 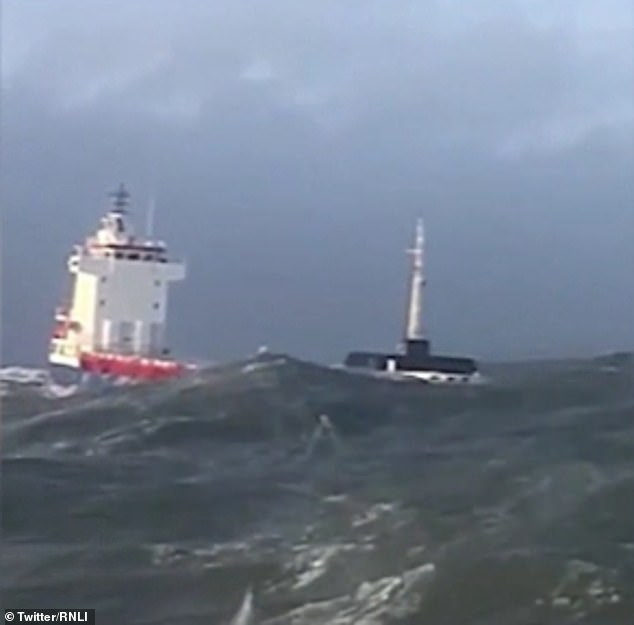 The three RNLI lifeboats went out to help prevent the 4,000-tonne cargo vessel from being pushed onto the rocks at Hook Head lighthouse on the Wexford coast

Further warnings were issued for heavy rain in Aberdeen, Aberdeenshire, Angus, and and Kinross in Scotland until 11am yesterday, when the downpours gave way to drier and brighter conditions across much of Britain.

This week footage from the lifeboats and the rescue helicopter captured the stormy seas as waves crashed over the stricken boat.

An RNLI spokeswoman: ‘In force eight conditions, Dunmore East and Kilmore Quay RNLI established tow lines onto the drifting vessel which was then very close to the rocks. The two lifeboats maintained the tow and kept the cargo ship away from shore while a tug was en route from Waterford. Rosslare RNLI stood by.

‘Battling strong waves over six metres high, the three lifeboat crews worked together to ensure the cargo vessel stayed away from the rocks until the tow was passed to the tug on its arrival at 5.40pm.

‘Escorting the vessels until they reached the calmer waters of Waterford Harbour in the early hours of Wednesday the lifeboat crews were eventually stood down and returned to station.’

Rosslare RNLI Lifeboat Operations Manager David Maloney said: ‘If it wasn’t for the work of the three lifeboat crews out in force eight conditions I fear the vessel would have hit the rocks and there could have been a serious loss of life.

‘The Dunmore East and Kilmore Quay lifeboat crews had an incredibly difficult job in keeping it away from the rocks.

‘The seas were huge, and it would not have been pleasant for anyone out there in those conditions.

‘The lifeboat crews were out for over 12 hours in a callout that involved serious skill and concentration and I am tremendously proud of all three lifeboat crews involved. Thankfully we did not have a tragedy.’

The Irish Coast Guard also sent its Rescue 117 helicopter based in Waterford to provide assistance, in case the crew had to be airlifted to safety.

Earlier this week, parts of Devon and East Sussex saw two inches of rain as Storm Barbara made her way across the country. 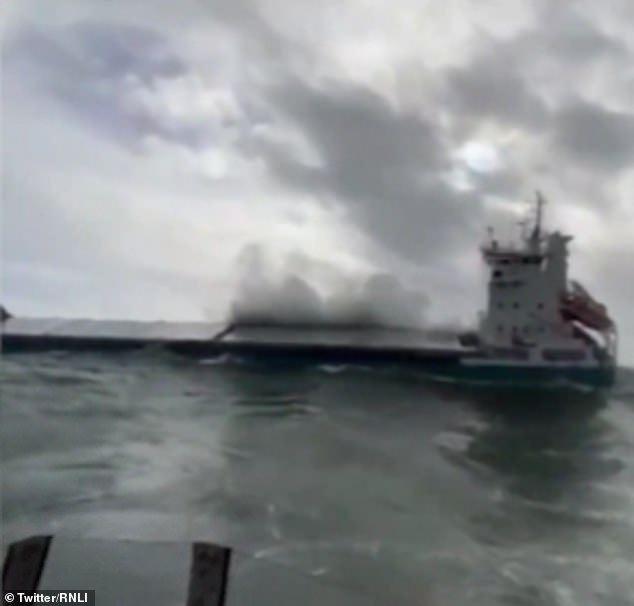 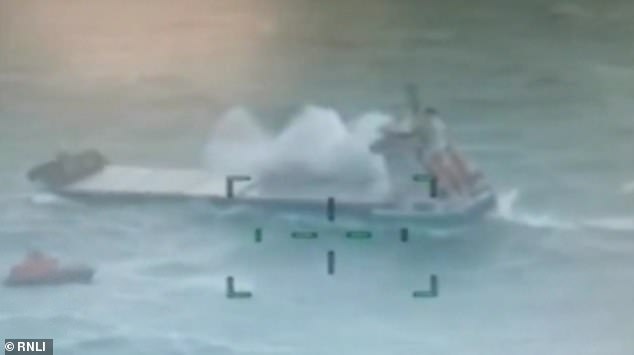 There were also flood alerts in place for parts of Leicestershire and on the Cornish coast, with gusts of 45mph to 55mph recorded inland and 65mph near the coast elsewhere as the wind whipped in through the English Channel.

The Scottish Fire and Rescue Service (SFRS) said it was called to reports of flooding in Ellon, Aberdeenshire.

Several appliances attended the scene and residents were rescued from six properties.

An SFRS spokesman said: ‘We were alerted at 4.53am on Thursday October 22 to reports of flooding affecting a number of properties in and around Bruce Crescent and Provost Davidson Drive in Ellon, Aberdeenshire. 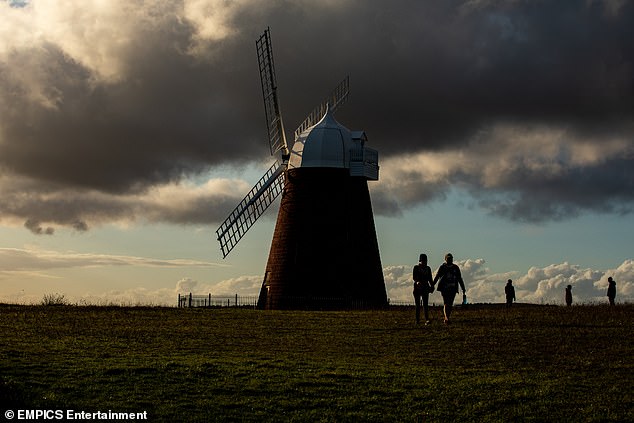 Members of the pubic walking past Halnaker Mill in northeast of Chichester, Sussex, as Storm Barbara sweeps across the nation

‘Operations control mobilised two fire appliances and two specialist water rescue units and firefighters worked to assist several people to places of safety from around six houses which had been affected by the flood waters.

‘Crews remain in attendance as they work to make the area safe and assist with the pumping of water from affected homes.’

Met Office forecaster Craig Snell said Storm Barbara, which battered Spain and Portugal earlier in the week, was ‘moving north east – we know as we got a glancing blow of it – and it’s weakening as it does so’.

He added that today ‘thankfully will be drier and brighter but there will be short, sharp showers around the South East and London.