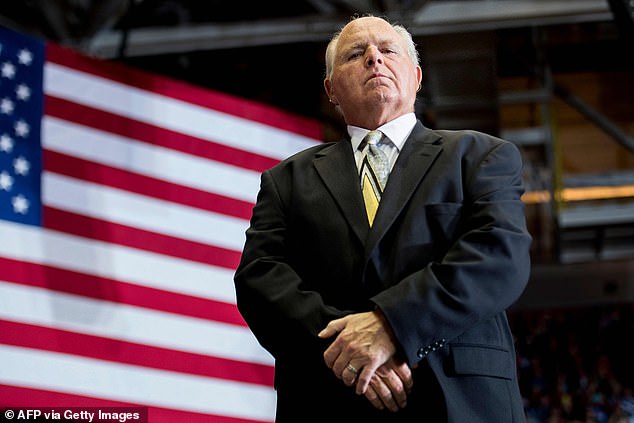 
The University of California-Riverside sent out a PR pitch to media outlets touting three of its professors as ‘experts’ on Rush Limbaugh – only for those professors to then slam Limbaugh as a ‘one-man hate industry.’

The professors said Limbaugh, who died of lung cancer at 70 on Wednesday, peddled in hate.

‘America is objectively a better place without Rush in it,’ one of the professors said in an email distributed to reporters, according to an article in the New York Post.

Conservatives have since ripped the university for the holding out the invective-filled academics as experts on Limbaugh in the wake of his death.

Rush Limbaugh, pictured, died from Stage 4 lung cancer at the age of 70 on Wednesday

Last year, Reza Aslan called Limbaugh ‘evil’ and a ‘curse upon this nation’ in a tweet

Reza Aslan, a creative writing professor and former CNN employee, said Limbaugh was a ‘one-man hate industry’ in the email distributed by the university’s PR department.

‘For decades, Rush Limbaugh made millions trafficking in racism, sexism, and xenophobia,’ the email reads, according to the New York Post.

Dylan Rodriguez, pictured,said Limbaugh will be  remembered as ‘an unapologetic purveyor of right-wing conspiracy narratives

‘He was a one-man hate industry. And while the hatred and fear he sowed throughout his destructive career will continue long after his death, America is objectively a better place without Rush in it.’

Last February, Aslan called Limbaugh ‘evil’ and a ‘curse upon this nation’ in a tweet after he announced his Stage 4 cancer diagnosis.

The conservative website Breitbart revealed his comments, prompting Aslan to scribe: ‘Actually “curse upon this nation” is just about the nicest thing I can think of to say about Rush Limbaugh dead or alive.’

Dylan Rodriguez, a media and cultural studies professor, said Limbaugh will be remembered as ‘an unapologetic purveyor of right-wing conspiracy narratives, racist mythologies, Islamophobic hate, and smug claims of white “American” victimhood,’ according to the New York Post.

‘In life, there were few public figures who contributed more to the normalization of everyday white supremacist, antiblack, homophobic and transphobic, misogynist worldviews than Rush Limbaugh,’ Rodriguez wrote, the outlet reported.

Shaun Bowler, a political science professor, described his legacy in the radio industry, writing that he helped ‘shape the modern GOPs electoral outreach and campaigning style,’ according to the outlet.

‘Limbaugh’s questionable accuracy, his love of conspiracy theories and fondness for insulting people was a successful ratings mix in the 1930s and it was again in the 1990s,’ Bowler allegedly wrote.

‘How ironic they believe themselves to be better people than they perceive Limbaugh to be. Their lack of self awareness is stunning,’ she wrote.

Others slammed the professors for ‘jealousy’ and lack of tolerance.

‘They are filled with jealousy because he had such a huge following and no one will even know who they are when they die or notice they are gone. Very sad really,’ wrote Karin Martinson Fish.

Julie Decker, another Facebook user, wrote: ‘Only hateful people are the ones constantly hating on people with different views.’

Others said that they were not fans of the late radio host but ripped the professors for allegedly celebrating in his death.

‘I didn’t agree with Rush. I don’t take delight in his passing. This was someone’s husband and father,’ wrote Jeff Gray.

Others praised Limbaugh for his brash, shocking attitude as a radio host.

‘I’m glad he pi**ed those people off so much. We conservatives are happy to carry on the tradition for Rush,’ wrote Linda Dennis.

Merkel: We will not win the pandemic until after the entire population of the Earth is vaccinated