This is the shocking moment a thrill-seeker dived off the top of 200ft rocks at Durdle Door, after a similar ‘tombstoning’ incident saw a man airlifted to hospital this week.

In the video, the unnamed man carefully traverses the rocks atop the famous archway in Dorset before taking a deep breath and plummeting 200ft into the water.

After being submerged for a few seconds, he floats to the surface appearing unscathed after the stunt.

The terrifying first-person clip has come to light just days after another man was injured performing a similar leap at the popular tourist hotspot.

Shocking footage showed the unnamed man brazenly leaping off the rocks on Wednesday, with an air ambulance called out to transport the man to Dorset County Hospital after his failed stunt.

In the POV video shared by AdrenalineWings on YouTube, the unnamed man peers over the edge of the 200ft Durdle Door archway. 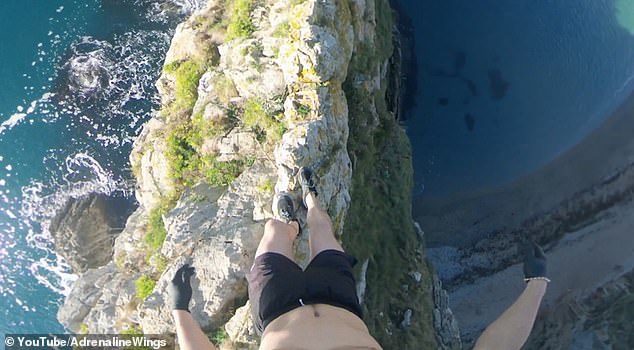 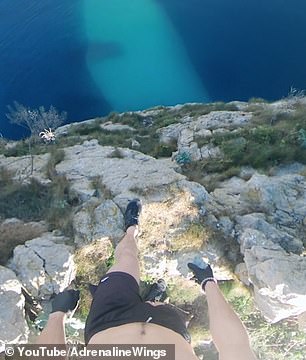 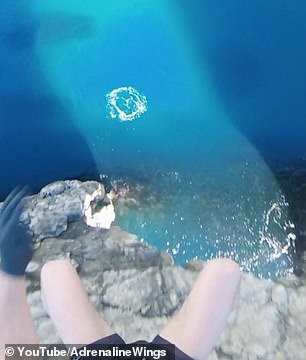 After taking a deep breath, the man leans back and hurls himself from the top of the rocks

Wearing black gloves, he throws a stone off the top of the rocks to showoff his feat, before inhaling deeply and leaping into the water.

Earlier this week, similarly dangerous footage showed another man ‘tombstoning’ from the top of the tourist attraction.

Video footage saw him leap to the cries of screams and shouts of alarm as he landed in the water, before failing to resurface as the clip came to an end.

Witnesses said the unnamed man injured his shoulder as they called the emergency services – with an air ambulance rushing to the scene in the Jurassic Coast.

Horrified beach-goers said the man had a bandage wrapped around his shoulder by coastguard officials who led him to the helicopter. 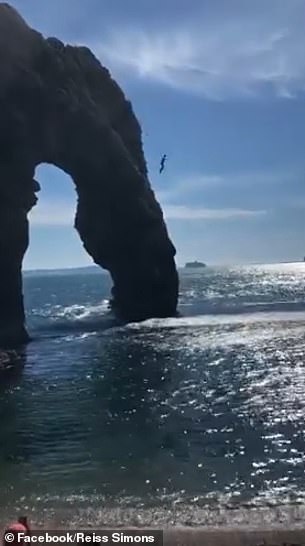 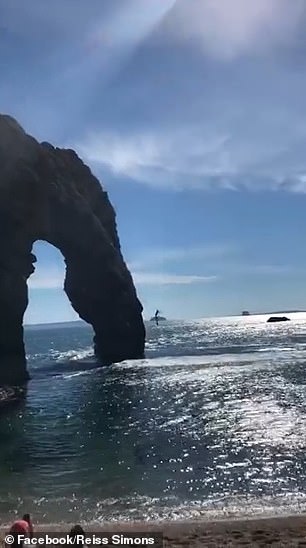 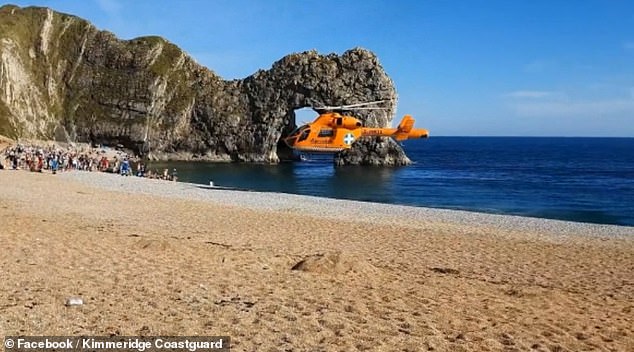 An air ambulance was called to take the man to Dorset County Hospital after his leap on Wednesday, June 2

Tourists have long been warned by coastguards not to jump from the popular vista for safety reasons.

In the wake of these scares, Her Majesty’s Coastguard tweeted: ‘In May, we responded to 3375 coastal incidents. Hundreds of people had a scare including a few this week.

‘A man tombstoning at Durdle Door injured his shoulder. It could have been a lot worse.’ 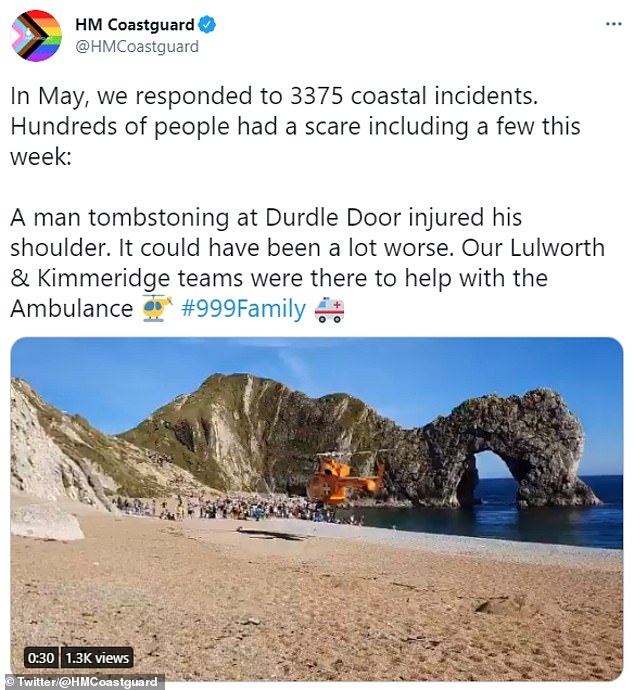 HM Coastguard tweeted that they responded to 3,375 coastal incidents during the month of May

The act of ‘tombstobing’ sees thrill-seekers jump into the sea from a high platform, such as a cliff, bridge or harbour edge.

They maintain a straight posture as they leap so their bodies look like a tombstone when falling.

In the UK alone, there have been 20 deaths from tombstoning since 2005.

Opinion: Bryson DeChambeau gets bugged by 'Brooksie' at the Memorial

Celtic job would be a boon for Ange Postecoglou and Australian football, but with it comes intense scrutiny

How Victorian Government led its people willingly into another disastrous lockdown

Urgent alert as Covid fragments are detected in Victoria, including two holiday destinations