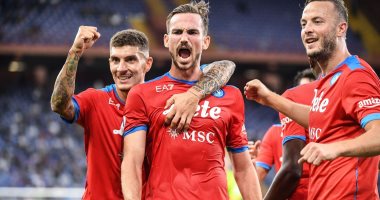 Yesterday, Thursday, witnessed many goals in international stadiums, most notably Napoli’s big 4-0 victory over Sampdoria and the top of the Italian league, while Al Shabab tied with Al Hilal 2-2 at the top of the Saudi League.

Napoli swept its host Sampdoria 4-0 in the match that took place between them on Thursday evening at the Marazi Stadium in the fifth round of the Italian Serie A championship for the current season 2021/22.

Roma regained the memory of victories again after beating Udinese with a clean goal in the match that brought them together at the “Olympico” stadium in the fifth round of the Italian Serie A championship “Calcio” for the current season 2021/22.

The Saudi Al-Nasr team achieved a difficult victory at the expense of its sub-match, with a goal without a response, in the match that brought the two teams together on Thursday evening, in the sixth round of the Prince Mohammed bin Salman Saudi Professional Cup.

The positive draw 2-2 was decided by the events of the Al-Shabab and Al-Hilal match, which brought the two teams together on Thursday evening at King Fahd International Stadium, in the sixth round of the Saudi League 2021-22.