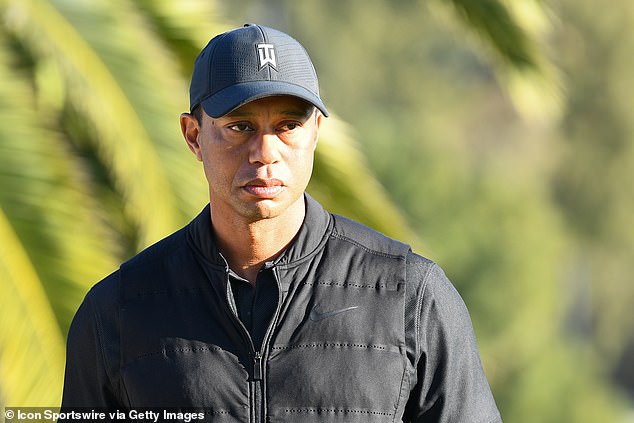 Tiger Woods has undergone further procedures on his leg after he was moved to Cedars-Sinai Medical Center in Los Angeles.

‘Tiger and his family want to thank you all for the wonderful support and messages they have received over the past few days,’ a message posted on his Twitter account read.

The tweet added that the 15-time major winner was recovering and in ‘good spirits’.

Woods was previously at Harbor-UCLA Medical Center where he got rods, pins and screws put in his right leg after Tuesday’s horror rollover crash.

He struck a median in his 2021 Genesis SUV, flipped his car several times and had to be dragged from the wrecked car through the windshield.

‘Tiger and his family want to thank you all for the wonderful support and messages they have received over the past few days,’ a message posted on his Twitter account read.

Speaking during a Q&A on Facebook on Wednesday, LA County Sheriff Alex Villanueva had already confirmed there would be no criminal charges against Woods.

He later told CNN that Woods does not remember the crash, which left him with open fractures on his tibia and fibula.

‘At the hospital he was asked about it by the investigators and he had no recollection of the crash itself,’ Villanueva added.

Speaking earlier on Wednesday, Villanueva had said: ‘There was no evidence of any impairment whatsoever. He was lucid, no odor of alcohol, no evidence of any medication, narcotics or anything like that. That was not a concern so no field sobriety test and no drug expert needed to respond.

Woods rolled the Genesis GV80 at 7.12am, less than 15 minutes after driving out of the Terranea Resort in Ranchos Palos Verdes, where witnesses said he seemed ‘impatient’ and eager to get on the road.

Police said the golfer was ‘lucky to be alive’ after he hit a raised central reservation while driving at high speed, smashed through a wooden street sign, splintered a tree, and then rolled his car several times

Asked if he may face charges, Villanueva said: ‘No. A reckless driving charge has a lot of elements to it. This was purely an accident.’

Sheriff’s Deputy Carlos Gonzalez, who was first on the scene, had confirmed: ‘At the scene, we’re looking for evidence of intoxication like if there’s an odor of an alcoholic beverage or there’s an open container or prescription medication.

‘At this time we didn’t see any evidence of impairment and anything beyond that in terms of the medical toxicology, I wouldn’t be aware at this time.’

He told Today on Wednesday morning that he did not recognize the famous golfer when he arrived, and that he just saw ‘eyes’ when he peered through the window.

The crash happened on the border of Rolling Hills Estates and Rancho Palos Verdes in LA on Tuesday morning. Woods was on his way to the Rolling Hills Country Club when he crashed

‘I don’t think he was aware of how gravely he was injured at the time. It could be a mixture of adrenaline, it could’ve been shock.

Woods was wearing his seatbelt.

Initially, it was claimed by the sheriff’s department that Woods was pried from the wreckage by the jaws of life. Later the sheriffs said that the fire department used an axe to chop through the windscreen and free him.

Woods has been recovering from back surgery and taking a break from professional golf, though he was expected to return sometime later this year.

It is not clear whether he was taking pain medication, although he has taken opioid medication after back surgery in the past, which resulted in an addiction.

In 2017 he was arrested for DUI after police found him slumped in his car in Florida with five drugs in his system, including two two painkillers. He subsequently checked into rehab for painkiller addiction.

He was involved in another high-profile crash in 2009 when he hit a fire hydrant after being chased from his home by then-wife Elin Nordegren, which led him to admit to multiple affairs and drug use.

Investigators are pictured photographing the badly-damaged SUV, with greenery still attached to it

Biden comments on the US strikes on Syria: Iran will not get away with it