Apple CEO Tim Cook called House Speaker Nancy Pelosi earlier this month to warn over ‘rushed’ antitrust bills that are circulating throughout the House, according to a new report.

Cook called Pelosi and other members of Congress to ‘deliver a warning’ that the antitrust bills were ‘rushed,’ would hurt innovation and hurt consumers by disrupting Apple’s services, according to The New York Times, which first reported the news.

Two sources familiar with the call told the Times that Cook asked Pelosi to delay the process of considering the bills.

Pelosi reportedly pushed back against Cook’s concerns, asking him to identify a specific policy objection.

Apple CEO Tim Cook called House Speaker Nancy Pelosi earlier this month to warn over ‘rushed’ antitrust bills that are circulating throughout the House, according to a new report 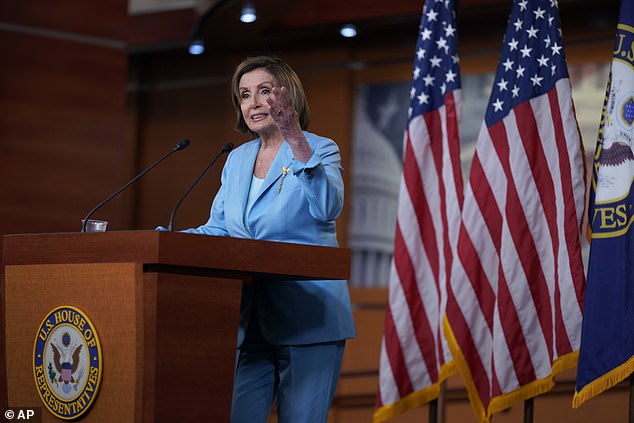 Pelosi reportedly pushed back against Cook’s concerns, asking him to identify a specific policy objection

In a letter obtained by DailyMail.com, Timothy Powderly, Apple’s Senior Director of Government Affairs, Americas, told the House Judiciary Committee that a number of provisions would create a race to the bottom for security and privacy.

‘The App Store creates competition, and it is a place where all developers—no matter their size—can turn their passion and creativity into a thriving business,’ Powderly wrote in the letter.

‘The App Store offers customers access to nearly 2 million apps, and it supports more than 2.1 million jobs across all 50 states. We are concerned that many provisions of the recent package of antitrust reform legislation would create a race to the bottom for security and privacy, while also undermining innovation and competition.’

‘We urge the Committee not to approve the proposed legislation in its current form, and we look forward to engaging with the Committee going forward.’

The Times added that lobbyists and more than 12 think tanks and advocacy groups with funding from tech companies have called, emailed or visited Capitol Hill lawmakers and their staff expressing their deep concerns about the bills.

Others in the tech industry have made their voice heard about the six pieces of legislation that are making their way through the House, including tech execs from Amazon and Google.

In a statement, Brian Huseman, Amazon’s vice president of public policy, said that the company is still analyzing the various bills, but that they may have a ‘significant negative effect’ on consumers and small and medium-sized businesses.

‘The Committee is moving unnecessarily fast in pushing these bills forward,’ Huseman wrote.

‘We encourage Chairman [David] Cicilline and committee members to slow down, postpone the markup, and thoroughly vet the language in the bills for unintended negative consequences.’ 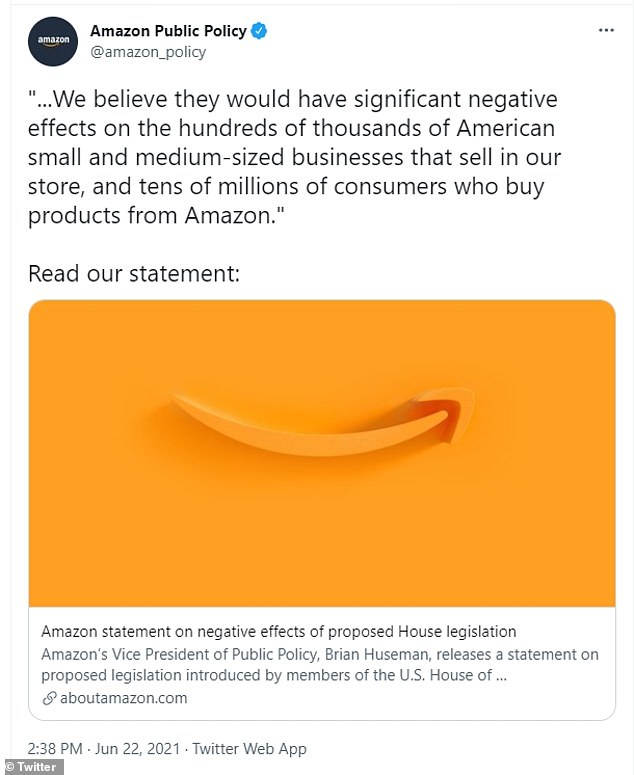 Amazon’s vice president of public policy, said that the company is still analyzing the various bills, but that they may have a ‘significant negative effect’ on consumers and small and medium-sized businesses

Google’s Mark Isakowitz, VP of Government Affairs and Public Policy, said it is not opposed to antitrust scrutiny or regulations on certain issues, but ‘American consumers and small businesses would be shocked at how these bills would break many of their favorite services.’

‘This would all dramatically undermine US technology leadership, damage the way small businesses connect with consumers, and raise serious privacy and security concerns.

Thirteen advocacy groups, including the TechNet, which calls itself a ‘bipartisan network of technology CEOs and senior executives,’ wrote a letter on Monday noting that two of the bills, one written by Rep. Cicilline, D-R.I. and the other by Rep. Pramila Jayapal, D-Wash., would have grave impacts on consumer apps.

‘Rep. Cicilline’s bill would ban Google from displaying YouTube videos in search results;ban Alexa users from ordering goods from Amazon; block Apple from preinstalling ‘Find My Phone’ and iCloud on the iPhone; ban Xbox’s Games Store from coming with the Xbox; and ban Instagram stories from Facebook’s newsfeed,’ the group of 13 wrote in the letter.

‘Rep. Jayapal’s bill would force free apps like Google Maps, YouTube, WhatsApp, Instagram, LinkedIn, iMessage, and FaceTime to be divested from their parent companies, putting at risk these free services and making them less accessible to the public.’

DailyMail.com has reached out to Facebook and Microsoft and with a request for comment for this story.

In October 2020, the Justice Department sued Google over its market size.

In December 2020, 38 states, including Texas filed a lawsuit against Alphabet Inc., accusing it of breaking antitrust law over its online advertising business.

In July 2019, the Justice Department said it was expanding its probe into ‘search, social media and some retail services online,’ an apparent reference to Facebook.

The Federal Trade Commission and 46 states sued Facebook in December 2020, accusing it of buying and freezing out smaller companies to stifle competition.

In July 2019, the Justice Department said it was expanding its probe into ‘search, social media and some retail services online,’ an apparent reference to Amazon.

The FTC is looking into whether Amazon selling its own products on its marketplace is an inherent conflict of interest.

In June 2021, the FTC said it would review Amazon’s proposed acquisition of movie studio MGM.

In June 2019, the Justice Department said it was looking into Apple’s app store after some developers have accused the tech giant of competing with them and then trying to get rid of third-party apps in the App Store.

In August 2020, Epic Games, maker of ‘Fortnite,’ said it was suing Apple over concerns that it has a monopoly on the iPhone, iOS ecosystem and the App Store. The case went to trial in May 2021 and is awaiting verdict.