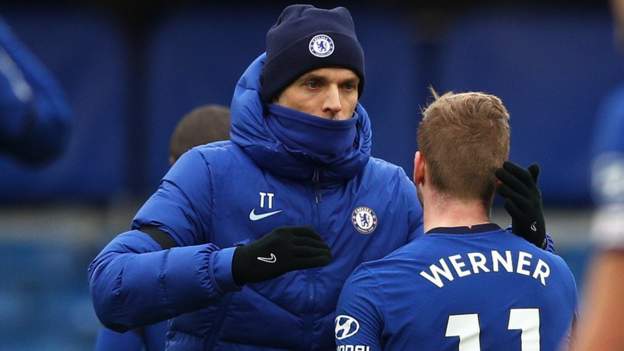 Chelsea boss Thomas Tuchel says out-of-form forward Timo Werner’s goal drought is “nothing special” and “happens to every striker in the world”.

However, both goals came via defenders, Cesar Azpilicueta and Marcos Alonso, as Werner’s barren run in the Premier League was extended to 12 games.

“As long as he has the impact and tries everything, like he did today, we will support him,” Tuchel said.

The Germany striker, 24, registered three efforts on target against the Clarets but none of them seriously troubled the visitors’ England goalkeeper Nick Pope.

Werner’s only goal in his past 17 Chelsea appearances came in a 4-0 FA Cup win against League Two side Morecambe earlier in January.

“He’s totally into it, he gives everything, but every striker is sensitive and nothing helps them more than goals,” said Tuchel of Chelsea’s £53m summer signing from RB Leipzig.

“If they miss goals for a certain amount of time, it’s the same for all of them.”

Werner – an unused substitute in Tuchel’s first game in charge against Wolves – took five matches before opening his Premier League account for Chelsea with two goals against Southampton in October.

He netted in four successive matches – wins over Burnley and Sheffield United as well as Champions League victories over Krasnodar and Rennes – over a fortnight in October and November.

Werner followed that up by scoring twice for Germany in a 3-1 Nations League win over Ukraine but has not netted in the league since and was dropped to the bench for three of Frank Lampard’s final four games in charge.

“Confidence is something that comes with good performances. As long as he lacks goals, he won’t be at 100 per cent,” added Tuchel.

“But it’s OK. He just has to keep going until he may find a very easy goal, to bring out the last few per cent.”

Timo Werner and Kai Havertz haven’t performed yet but people forget they are youngsters moving in Covid times.

Werner is a quality striker but he’s just low on confidence at the moment.

Chelsea will be hoping Tuchel can bring the best out of him.

It’ll be interesting to see how he goes about that – I don’t think he’s the type to put his arm around a player to do that.