Tiny 74 square foot flat the size of two king-size mattresses in Pimlico is on sale for £225,000

The eyebrow-raising apartment in Pimlico, central London, measures just 74 square feet, leading some to suggest it’s nothing more than a ‘cupboard under the stairs’.

Images of the miniature abode show a single bed tucked into a corner and a tiny bathroom area, which can be viewed from the bed through a see-through door. 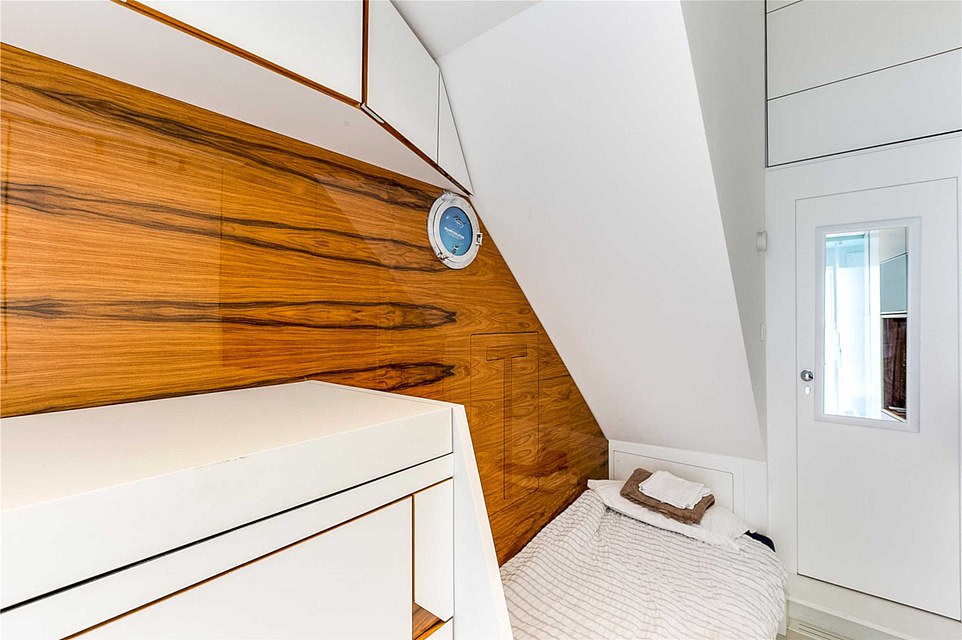 The ‘kitchen’, which can also be found at the foot of the bed, is a counter top with a built-in fridge and a ‘combi microwave’ according to the studio’s sellers.

The flat also features an ‘outdoor access’ which is a flat roof overlooking a sheer drop at the back of the building.

The ‘pied-a-terre’ is being marketed by Chestertons Estate Agents and Jackson Stops Estate Agents at an eye watering £3,378 per square foot – more than double the average price for the area. 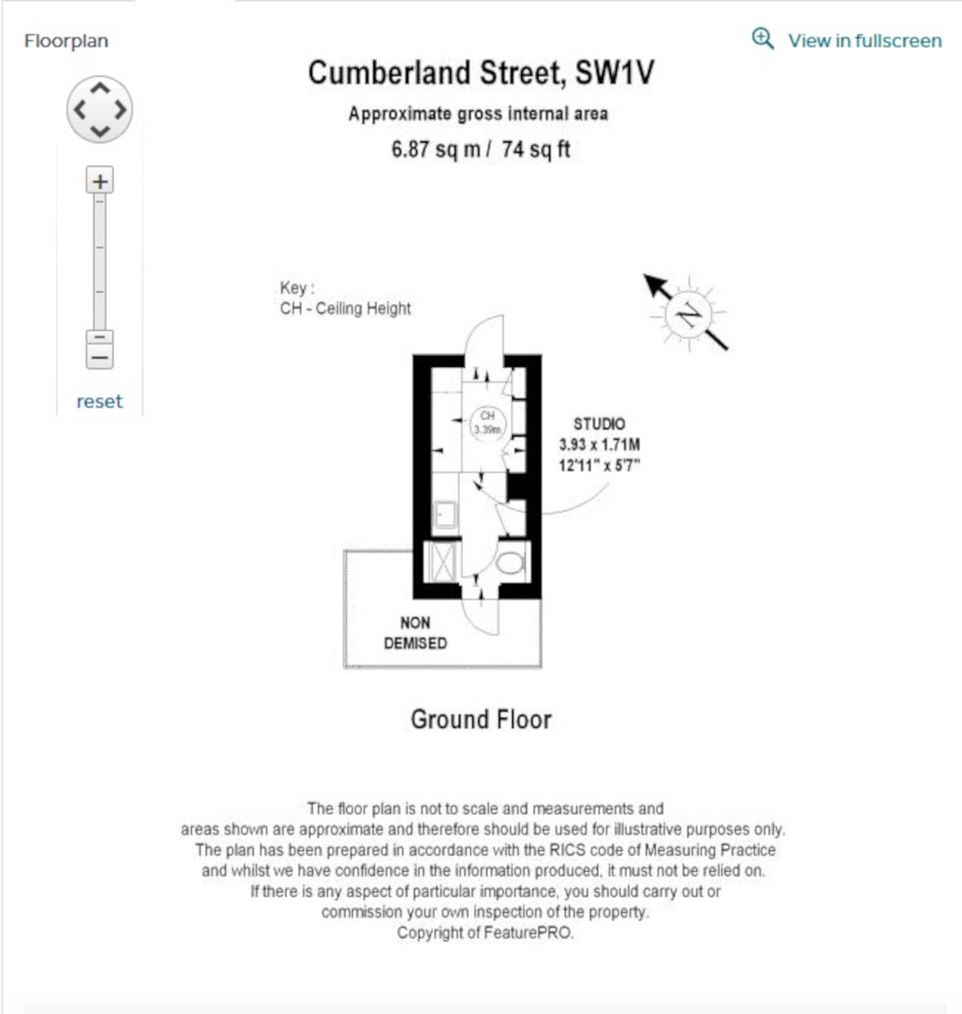 Some people questioned how the tiny apartment could be legal and took to the Money Saving Expert forum to express their anger online.

One posted: ‘That is truly sad, I really hope someone isn’t desperate enough to buy it. You could buy 1.5 of my three bed terrace house with gardens for that.’

Current government guidelines state that the minimum size for a single bedroom flat in the UK is 377 square feet but smaller properties are allowed by law.

A spokesman for estate agent Jackson Stops said: ‘You won’t get a mortgage for it, but that doesn’t make it illegal.’ 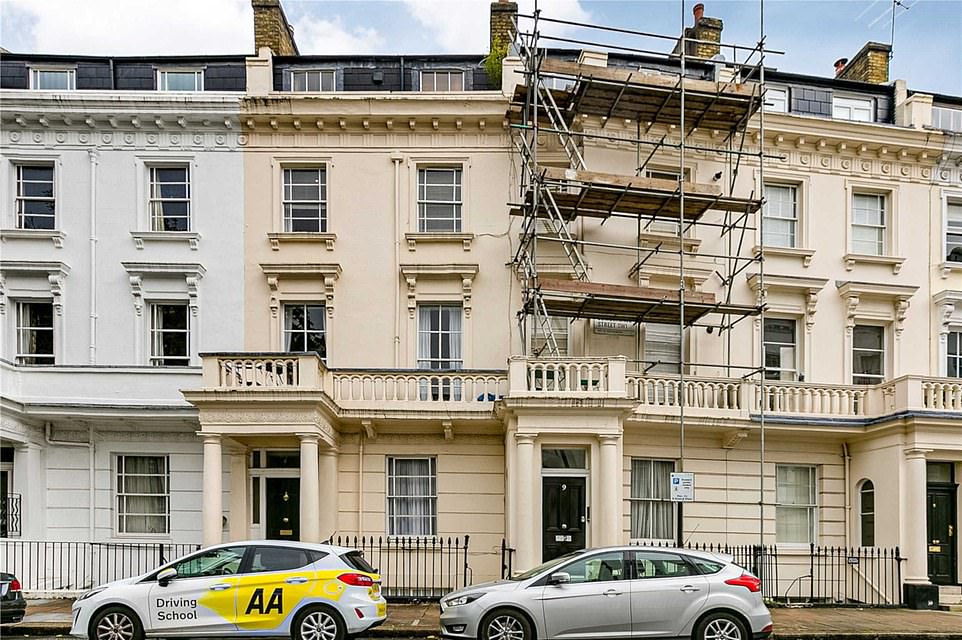 Deceptive: From the outside of the property you would never know how tiny the Pimlico studio flat is 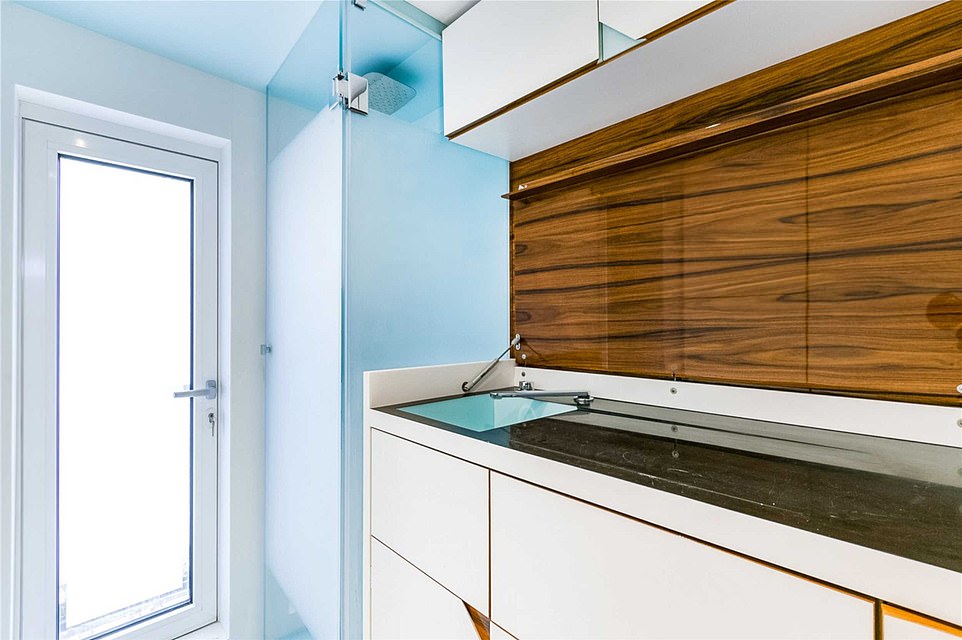 The kitchen sits at the foot of the bed and is equipped with a counter top, a built-in fridge and a ‘combi microwave’

Another forum user said: ‘Minimum room size for one adult for it not to be considered overcrowded is 6.5m².

‘This ‘flat’ comes in at 6.72m² including non habitable spaces such as kitchen and shower/toilet. Oh, and no guard rail on the ‘patio’ area. 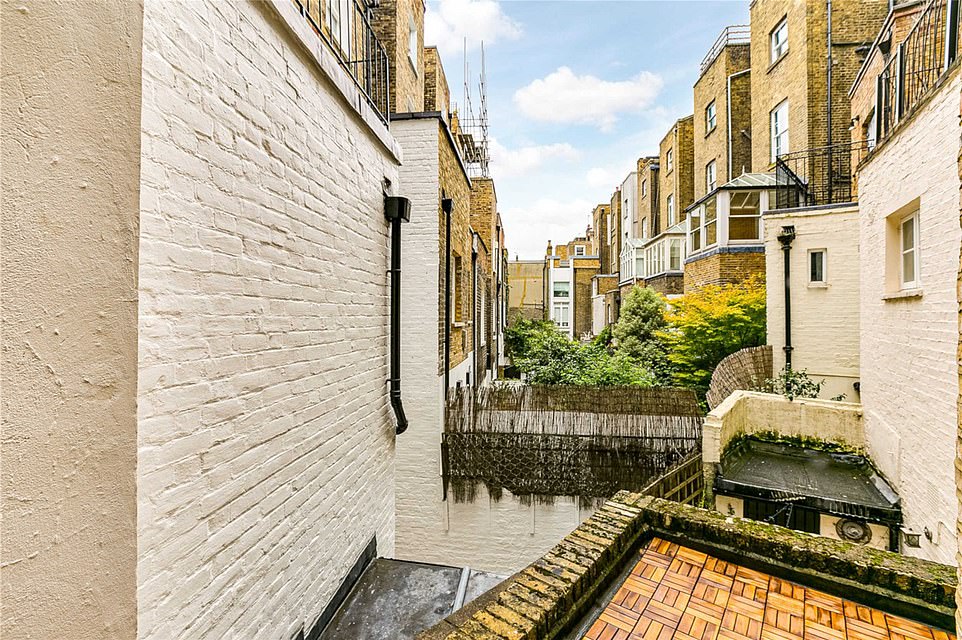 Breath of fresh air: Not much room to swing a cat but the outdoor space on the flat roof will give the buyer some breathing space if it gets a tad suffocating indoors

‘I could fit two of those into just about all the rooms in my house, including the garage.’

Another commenter posted: ‘This flat is horrifically tiny, as hard as it is to believe the pictures actually make it look bigger than it really is.

‘The entire property, including the kitchen and bathroom areas, is roughly the size of two king size mattresses laid end to end.’ 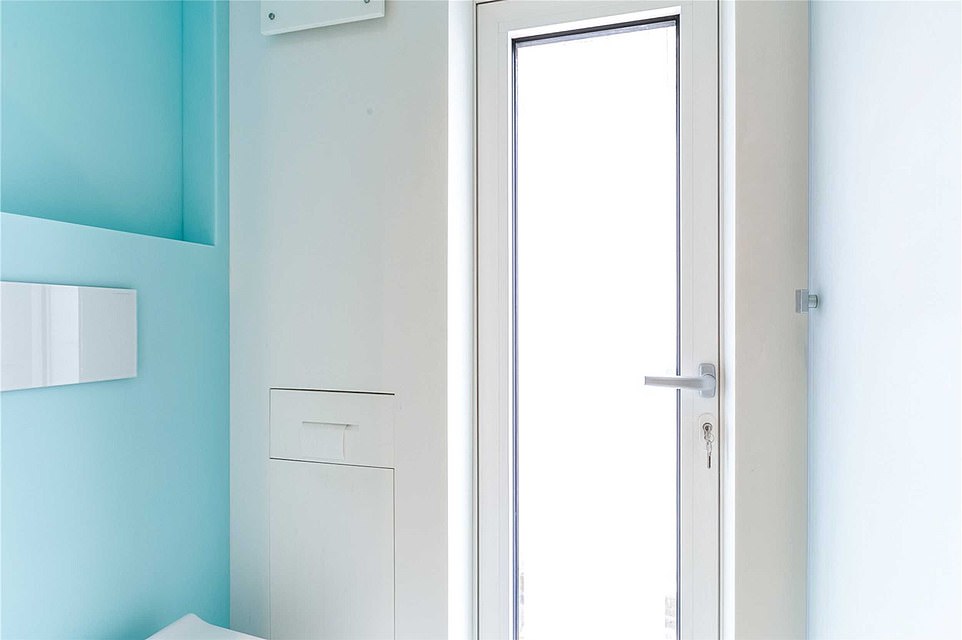 There’s a minuscule bathroom area which can be viewed from the bed through a see-through door.

Another added: ‘You can see the stairs going above the bed.. So essentially it’s a cupboard under the stairs and landing space.’

Describing the property, Jackson Stops said: ‘A most unusual self-contained studio apartment is presented to the market in Pimlico SW1.

‘Located on the ground floor this would be ideal for all those looking for a central London pied-a-terre or buy to let investment.

‘Inspired with a nautical theme it is cleverly fitted out with built-in storage, combination microwave, washer dryer, refrigerator with access to un-demised flat roof / secondary means of escape.’ 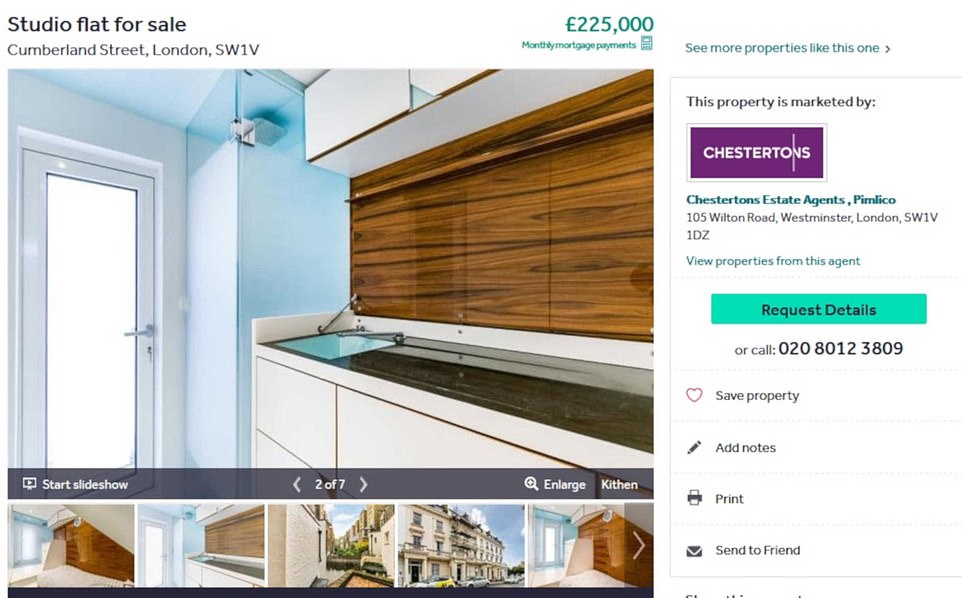 The rise of ‘micro homes’ and the Government guidelines surrounding them

The Government introduced a ‘Permitted Development Rights’ (PDR) scheme in 2013 which allows property developers to convert offices into residential homes without a planning permission.

Since then, the UK has seen a surge in ‘micro homes’ with an increasing number of homes measuring less than 398 square feet – the minimum studio floor area under national standards.

There’s no strict definition of a ‘micro home’ but is often referred to anything below the national standard.

As these standards aren’t legally binding, property developers can submit planning permissions to local authorities who cannot reject properties on the basis of the size alone.

Jackson Stops have defended the property.

A spokesman for Jackson Stops added: ‘There are plenty of apartments for sale under 35 square metres. They would still need solicitors to be involved. The price per square foot on that basis is expensive.

‘But, the price for the property would make it the cheapest in the area and I can understand from a buyers point of view why they would be interested in it.

‘A one bedroom flat on the first floor could be £1500 pounds per square foot compared to a five story that is £1,000.

‘It is not the basis when it comes to taking the valuation of the apartments for sale.’

There was similar outrage after it was reported last month that a tiny London flat with a shower in the kitchen was available to rent for £1,000 a month.

The one bed property in Stoke Newington, North East London has a separate bathroom, complete with a bath already fitted with a showerhead.

In July a micro studio flat with a shower and sink right next to the bed went on sale in Notting Hill for £200,000.

The 79-square foot apartment fitted with with a single bed, hob, shower and toilet cubicle was described by letting agents as an ideal opportunity to create a London ‘bolt hole’. 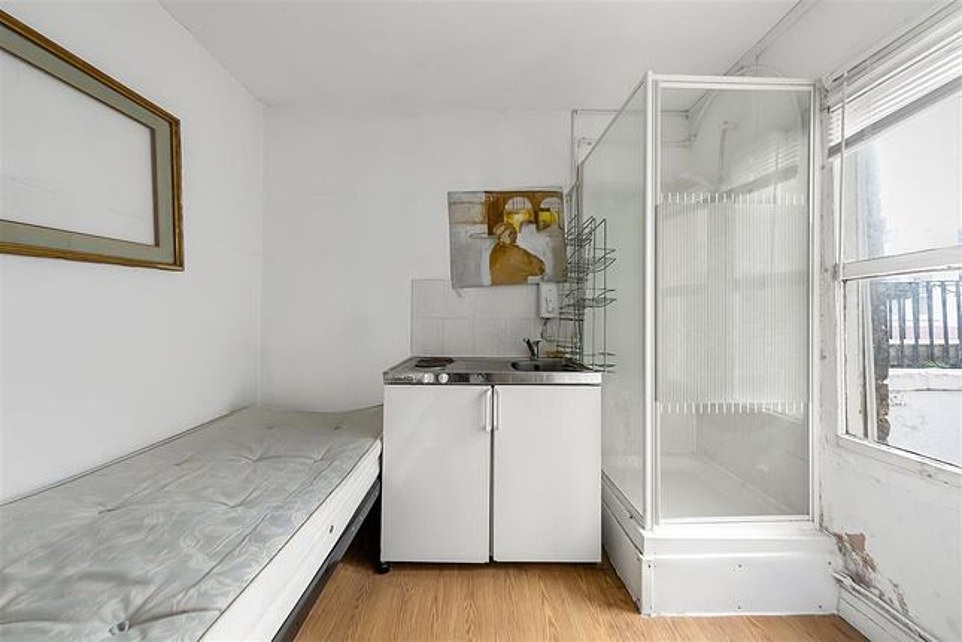 The Notting Hill flat is fitted with a sink, a shower and a toilet cubicle and went on sale for £200k 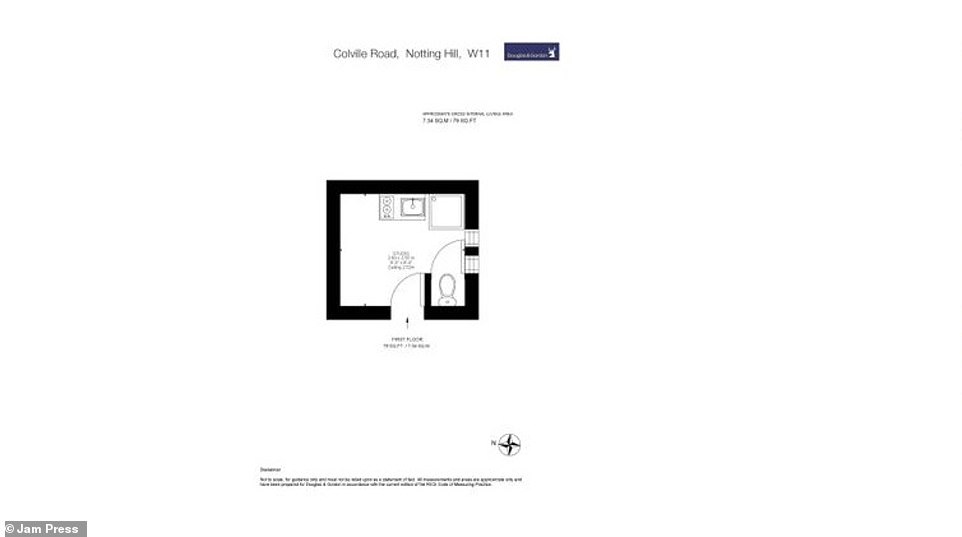