Titi, attacking the health authorities: What happened is a farce and a disgrace to Brazil 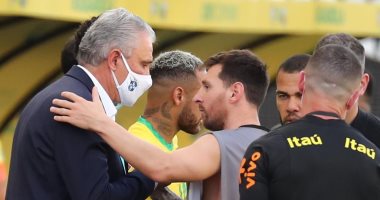 Tite, the coach of the Brazilian national team, attacked the health authorities in his country, after canceling the match against the samba team and his Argentine guest, which was scheduled, At the Arena Corinthians in Sao Paulo, as part of the sixth round of South American qualifiers for the 2022 World Cup.

The players of the Argentine national team withdrew from the grounds of the Arena Corinthians stadium in Sao Paulo, which hosts the confrontation of its Brazilian counterpart, after the Brazilian health authorities entered the stadium and tried to remove the Tango players from England from the match because of their violation of health protocols by force, which was rejected by their colleagues and on Headed by captain Lionel Messi.

Tite said in a brief statement after the end of the match, directing his speech to the health authorities:What you did is a farce and a disgrace to Brazil.”

For his part, Barra Torres, head of the Brazilian National Health Surveillance Agency, clarified matters, saying:Last night we found that the four players made false statements and came from the United Kingdom.”

He continued:“We got to the stadium because they didn’t follow the notice not to leave the hotel, We warned them that they have to wait at the hotel to be deported“.

The South American Football Confederation (CONMEBOL) issued an official statement on the crisis in the confrontation between the Brazilian national team and its Argentine guest. At the Arena Corinthians in Sao Paulo, as part of the sixth round of South American qualifiers for the 2022 World Cup.

“By the decision of the match referee, the match organized by FIFA between Brazil and Argentina for the World Cup qualifiers has been suspended,” the Confederation of South America said in its statement.

The match between the Brazilian national team and its Argentine counterpart stopped several minutes after its start. FOX Sports BrasilThe television reported that the Super Clasico was suspended due to a request by members of the “Anvisa” organization, the national health monitoring agency in Brazil, to stop the match due to the participation of Argentine players who violated the quarantine rules.

network was “TYC” The Argentine reported earlier that the Brazilian authorities are asking the Argentine national team quartet Martinez, Buendia, Lo Celso and Romero to leave the country as soon as possible, due to violating the precautionary measures related to the Corona virus..

Border Crisis and the Role of the Biden Administration