To burn the rumen and reduce blood sugar… Is it better to exercise in the morning or evening? | health

To burn the rumen and control blood sugar .. Is it better to exercise in the morning or evening? And how do we deal with our love of fast food? How do we avoid hidden sugar found in ready meals? Are appetite suppressants effective for weight loss? The answers are in this comprehensive report.

Is it better to exercise in the morning or in the evening to lower blood sugar and burn the rumen?

According to several studies on when is the best time to exercise, the data can be summarized as follows, according to a report by Gretchen Reynolds in The New York Times:

How does exercise time affect the body?

A new study published in the journal Cell Metabolism and conducted on mice, led by Julen Zirat, Professor of Clinical Integrative Physiology at Karolinska Institutet in Stockholm, Sweden, shows that morning workouts (from the perspective of mice because their cycle of activity differs from humans) leads to greater dependence. Get more fat than blood sugar to fuel your workout. The opposite happened when mice ran in the evening.

If these patterns hold true in people, they may suggest that morning exercise contributes more to fat loss, while exercise later in the day may be better for blood sugar control.

But mice aren’t humans, and we don’t yet know if the patterns apply to humans, and Dr. Zirath said the researchers in the study are working on a similar experiment involving humans.

“Even with its limitations, the study is very important and confirms the effectiveness of exercise at any time of the day,” said Dr. Lisa Chao, a professor of medicine and endocrinology at the University of Minnesota, who was not involved in the research.

Follow-up studies, for example, are likely to tell us whether evening cycling or running may prevent diabetes more effectively than brisk walking or swimming in the morning.

But for now, “the best time to exercise is when you get a chance to exercise,” said Dr. Zhao.

In contrast, a 2020 study showed that men at risk of developing type 2 diabetes who started exercising 3 times a week had better insulin sensitivity and blood sugar control if they exercised more in the afternoon than in the morning.

These results mirrored similar findings from another study, in which men with type 2 diabetes who exercised intensely in the early morning showed undesirable rises in blood sugar levels after exercise, while the same workouts in the afternoon improved control. on sugar. 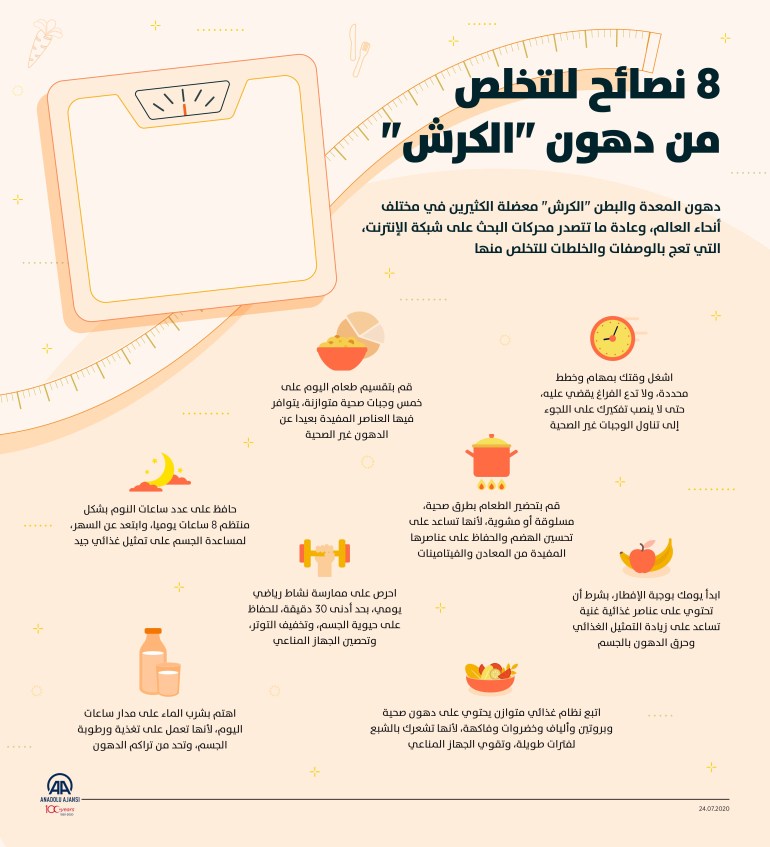 Practical tips to get rid of the rumen

1- Because of the psychological factor, fast food cannot be completely dispensed with, but it can be adapted

Pizza, french fries and burgers. It is very tasty and irresistible, but it is not healthy and causes weight gain. What to do? Whatever is forbidden is desirable, the same applies to foods as well.

Psychologists from the University of Hertfordshire in Britain say that no matter how hard you try, you will eventually go back to eating these forbidden foods. Therefore, you have to overcome this psychological aspect by finding alternatives, for example: instead of sausages, buy a Margherita pizza and put fresh vegetables on top of it, this will give you a feeling of fullness and will provide your body with vitamins. And don’t forget the herbal seasoning on top, like oregano, according to a report in Deutsche Welle.

According to a new study prepared by the University of Sydney, it is not important for our health if we distribute the recommended 150 minutes of exercise per week, on two days or on seven days.

In both cases, the risk of heart attacks and cancer is equally reduced. In addition, muscles grow better if we do not exercise on a daily basis. Rest periods between exercise days are necessary to replenish them.

Humans eat red food unconsciously because this color reminds the brain of the ripe fruit, and gives it a signal that it has more nutrients. Thus, a few calories can be saved if we eat green foods (especially vegetables), without noticing a big difference.

Two-thirds of the sugar we consume does not come from sweets or fruit, but rather from processed foods. According to the Consumer Protection Agency in Germany, ready-made meals contain large amounts of sugar (including red cabbage in the glass or salads with meat), as well as soft drinks, many cereal mixtures (muesli), and yogurt with fruit, all of which contain large amounts of sugar. Big sugar. If you reduce your intake, you will save a lot of sugar.

How do you discover hidden sugar in foods? Looking at the label on the packaging. Sugar is found in ingredients ending in:

5- Do you have to sit permanently? You have to do small movements or exercises while you are in the chair

Sitting has recently been called the “new smoking”, because it increases the risk of cardiovascular disease. What do you do when you have to sit down? Move.

Researchers in London believe that women who do not sit comfortably and have to get up every now and then are as healthy as people who walk a lot. Because even the smallest movement stimulates blood circulation, which makes you feel healthy. Even when you are sitting on the chair in the office you can do some exercises from time to time, for a minute or half a minute.

Nutrition expert Angela Clausen warned that some appetite suppressants or treatments, which are advertised to suppress appetite or burn fat and lose weight, may be harmful, as well as they do not help in losing weight permanently, in statements to the German News Agency.

A member of the Consumer Counseling Center in the German state of North Rhine-Westphalia clarified that losing weight through diuretics, for example, and that it has a quick effect in losing weight by getting rid of fluids, but in the end it does not mean getting rid of fat (it also puts pressure on you). for all and dangerous for kidney patients).

In addition, substances that reduce appetite, such as glucomannan, may cause intestinal obstruction, if not enough fluids are drunk with it, and although these treatments make a person feel full, hunger will attack again after stopping the effect of the treatment, which is known yo-yo effect.

The German expert advised to rely on vegetables and whole grains rich in dietary fiber, which provide the body with important elements for its vital processes.

She also advised to stay away from diet shakes and nutritional supplements, many of the latter containing a high percentage of sugar and calories.

Modern Mirrors For the Home at Cheap Rates – Is it Really True?