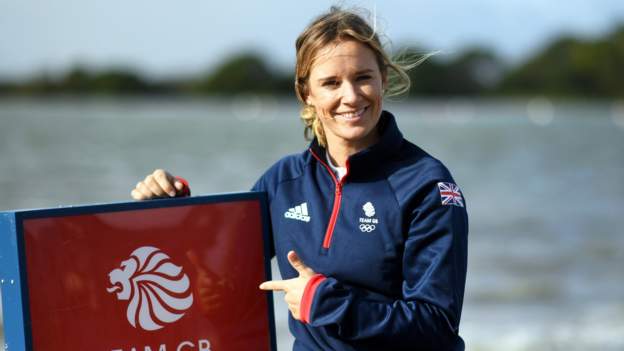 With less than 200 days to go to the Tokyo Olympics, Rio 2016 gold medallist Hannah Mills says the ongoing disruption and uncertainty caused by Covid-19 is “exhausting”.

Organisers insist the postponed 2020 Games will go ahead as planned in July.

But after travel restrictions between the UK and Spain threatened to leave Mills stranded 2,000 miles away from her boat, the 32-year-old has described the Olympic build-up as “mentally draining”.

It took special dispensation from the Spanish government to allow Mills and 470 partner Eilidh McIntyre to return to their training base in Lanzarote last week.

“We were bracing ourselves for winter in the UK, thinking we wouldn’t be able to get back to Spain,” Mills told BBC Sport Wales.

“The [dispensation] letter arrived at 8pm the night before – we had booked our flights for 7:15am the next morning. So it was really last minute.

“The last six months [before an Olympics] is pretty crucial for any athlete. So we’re unbelievably relieved, happy and just fortunate to have this opportunity to get out here and train.”

Being back in Lanzarote allows Mills and McIntyre to train with nearly all of their main rivals for Tokyo.

The pair have not sailed at a major event since August 2019, when they won the women’s 470 world title.

So even a handful of practice regattas in the Canary Islands will be vital in their preparation for the Olympics.

They are next due to compete at the 2021 World Championships in Portugal in early March. But as with every sporting event, it is not certain whether it will go ahead.

“And bad news. It just feels as though every day there’s more bad news.

“It’s a big challenge. But I think I’ve also got a lot better at being happier with the small things and being grateful for the little things in life.”

With so much uncertainty over the international sailing calendar, Mills and McIntyre are prepared to stay in Lanzarote right up until they leave for Japan in late spring.

That is of course if the Tokyo Olympics definitely take place.

“I don’t know if they’ll go ahead,” says Mills. “I definitely switch in terms of my opinion on that quite frequently.

“All we can do is go on the fact that today they’re happening so we have to do everything we can today towards being ready in the summer. That’s the mindset we’ve got.

“Should they go ahead? I can’t say. As someone so heavily involved and so emotionally connected to the decision, I couldn’t give a fair answer.

“I can’t imagine as an athlete how [cancelling it] would feel. But the decision will be made depending on how they can run the Games, if they think it’s fair, if it’s as safe as they can do it.”

The Olympic women’s 470 event is due to begin on Wednesday 28 July. If Mills and McIntyre are on the start line, their disruptive build-up will be forgotten.

Mills knows what it takes to win Olympic gold and she says she will be doing everything she can to win one again.