Sisters Cindy Sember and Tiffany Porter are both hoping each other does well at the upcoming Tokyo Olympics – but there’s a palpable sense of competition between them.

The British hurdling pair, who are based in Michigan in the United States, speak lovingly of their shared pride in the face of adversity and in light of a major life change – Sember rupturing her Achilles in 2017 and Porter becoming a mother in 2019.

They are evidently relishing being on their journey in the sport side by side. However, a natural rivalry remains.

“We’re competitors so my goal is always to beat her like everyone else but I of course want her to do well, too – I’m so proud of her returning so well,” explained 26-year-old Sember.

“It’s anybody’s day with the hurdles but I have more confidence than ever before so I am going for gold.”

Meanwhile, 33-year-old Porter – mother to 22-month-old Chidera, added: “I train to win and God willing, I’ll stay healthy and make the team at the British trials [in Manchester at the end of June]. I was so proud of clawing back to an elite level after having my daughter.”

‘There’s a lot of inspiration in her story’

The sisters were born and raised in the United States but have held British passports since birth because of their mother’s nationality. Training partners in the 100m hurdles under the watchful eye of Porter’s American husband Jeff – himself a two-time Olympic hurdler – they believe their unique partnership can propel them to Olympic glory in Japan come August.

“It would be amazing to make another Olympic team together, especially as we’ve both been through so much in the past few years,” said Sember, who claimed a breakthrough fourth place at the Rio 2016 Games ahead of elder sister Porter in seventh.

Their close bond was clear for all to see when Sember won 60m hurdles silver and Porter took the bronze at March’s European indoor Championships.

“I knew athletes don’t tend to come back from that injury in the way I did and Tiffany had trying times after becoming a mother, so to medal together was an experience we can’t put into words,” said Sember.

Porter’s pride is clear too, saying of her younger sister: “I’m so proud of Cindy running stellar times as her story is so special, coming back from what many thought was a career-ending injury – trusting in her training and in herself to now be running the best she’s ever run. There’s a lot of inspiration in her story.

“There’s so much potential there, I’m excited to see how her career unfolds. She forces me to up my game.” 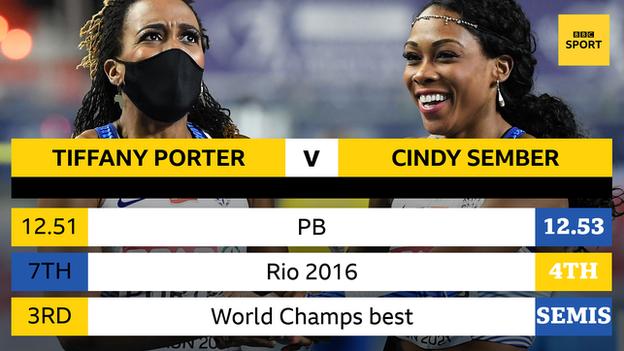 A blessing in disguise

Sember is indeed enjoying the form of her life; she sits fifth on the 2021 world list with a personal best time of 12.53 seconds.

And – four years to the day since her career-threatening injury – she won her first Diamond League event at wet and windy Gateshead.

“I’m very happy to be running the times I know I’m capable of, it’s been a long time coming,” said Sember.

“I believe if I hadn’t gone through the injury, I wouldn’t be working as hard as I do now.

“It’s been a very hard journey for me but the mental toughness and strength I’ve gained has helped me get better as an athlete, and now I’m seeing everything I’ve been working towards coming to fruition this year.”

Porter, the British record holder, has not quite matched her sister’s times this year, but she remains in a positive mood as she ups her training in preparation for the Games.

“The additional year [since the Games were delayed] may have been a blessing in disguise for me, with having another year under my belt since having my daughter – more training, lifting, getting my body and fitness back,” she reflected.

Of her training dynamic, overseen by husband Jeff, she says: “It works well but he knows he’s only the boss while at the track. Chidera helps us keep everything in perspective.”

The 2013 world outdoor bronze medallist, has now switched from working 20 hours a week as a pharmacist, in which she spent a period administering the Covid-19 vaccine, to life as a full-time athlete.

“One of the main reasons I got into the health profession was to help people,” said Porter, who won her European indoor bronze medal while racing in a face mask.

“When the opportunity to play an instrumental role in helping my community presented itself, I didn’t think twice about it.

“I’ve now taken a leave of absence until after the Games.”

And with her attention now firmly focused on joining her sibling on the plane to Tokyo, this swift pair now certainly stand a good chance of completing such a testing Olympic cycle with a glittering fairy tale ending.

Gantz: If Nasrallah’s threats turn into actions, the result will be painful for the citizens of Lebanon

Australians will likely be stuck with snap Covid lockdowns and rolling restrictions even as vaccination numbers...