Born in Cheltenham in 1892, Sir Arthur Harris emigrated to Rhodesia, modern day Zambia and Zimbabwe, at the age of 17, returning to England at the outbreak of the First World War to serve his country.

By the 1920s he was a Squadron Leader serving in the Middle East. Following the collapse of the Ottoman Empire at the end of World War One Britain and France were in control of the region.

In 1922, with rebellions rising in Mesopotamia – modern day Iraq – Sir Arthur took part in bombing raids over villages held by rebel tribes. It was a learning curve for the RAF and was said to have inspired later attacks on German cities during the Second World War. 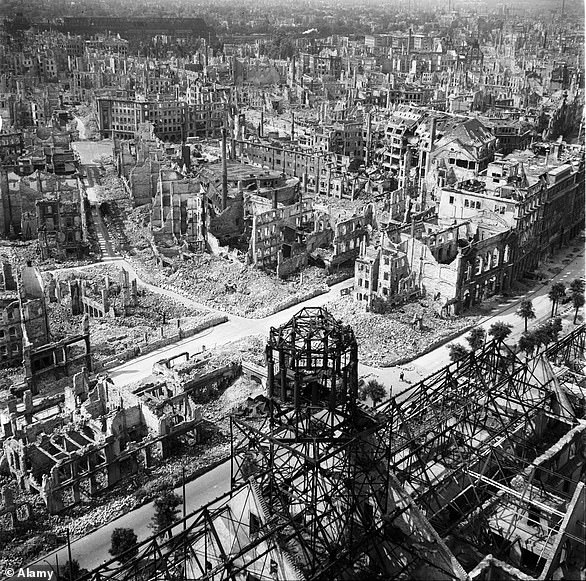 Allied raids in February 1945 tore through the East German city of Dresden, killing up to 25,000 people

Historian AJP Taylor wrote of Sir Arthur: ‘He genuinely believed that the German people could be cowed from the air as he had once cowed the tribesmen of Irak (sic),’ according to the BBC.

Before the outbreak of the Second World War, he would serve in India, Palestine, Egypt and Persia.

In the early part of the war, the Bomber Command’s raids had little effect. The bombers only flew at night to reduce the danger of being shot down, but with primitive navigation equipment, this made it difficult to identify and hit a small target.

In 1941, it was decided that The Bomber Command would target entire industrial cities – known as area or blanket bombing.

This policy was endorsed by Churchill and formally adopted in early 1942 as Sir Arthur took the helm of The Bomber Command.

Harris said at the start of the bombing campaign that he was unleashing a whirlwind on Germany.

Working class housing areas were targeted because they had a higher density and firestorms were more likely. This disrupted the German workforce and the Germans capability of producing more weapons.

In May 1942, now serving as Commander in Chief of  RAF Bombing Command, Sir Arthur organised the first ‘Thousand Bomber Raid,’ launching 1,047 aircraft against Cologne in an overnight bombing raid to overwhelm enemy radar and defences.

Over 3,000 buildings were reportedly destroyed and another 9,000 damaged.

Two more raids with similar numbers of raids happened in 1942 under Sir Arthur’s leadership – an uneffective attack on Essen and a raid on Bremen, which targeted factories and shipyards.

In July 1943, the Commander-in-Chief oversaw the Battle of Hamburg, codenamed Operation Gomorrah, which was a series of air raids which lasted for eight days and seven nights.

In February 1945, with the Second World War just three months away, Sir Arthur oversaw the firebombing of Dresden, which killed 25,000 German  people.

In the space of two days, 3,900 tons of bombs and incendiary devices were dropped on the city in East Germany.

In 1975, Sir Arthur defended the attack on Dresden, saying: ‘The bombers kept over a million fit Germans out of the German army… Manning the anti-aircraft defences; making the ammunition, and doing urgent repairs, especially tradesmen.’

‘I’m sorry for being racist when I was younger’

Atatiana Jefferson: ‘Why I will no longer call the police’

Atatiana Jefferson: 'Why I will no longer call the police'

Coronavirus: A third of pupils 'not engaging with work'

PlayStation 5 matches the price of the Xbox Series X

Winners and losers from Week 3 in college football are led by Central Florida, Clemson

Morgan Beller, one of the founders of Facebook's libra digital currency, is leaving the social media...