Tory MP Sir Charles Walker has raged at ‘disgraceful and un-British’ police officers as they bundled an elderly woman into a van for protesting outside Parliament.

The former chair of the 1922 Committee told the officers that their actions were ‘an outrage’ as he walked across towards Portcullis House on Tuesday afternoon.

Various reports said that the 72-year-old woman was participating either in an anti-lockdown protest or an anti-vaccine demonstration.

Raising the incident as a point of order, Sir Charles told the Commons: ‘I have just witnessed an elderly lady peacefully protesting with a handful of other people be arrested and carried spread-eagle to a police van just outside the precinct of the House of Commons.

‘This is a disgrace. This is un-British. It is unconstitutional and this Government, our Prime Minister needs to end these injustices now. 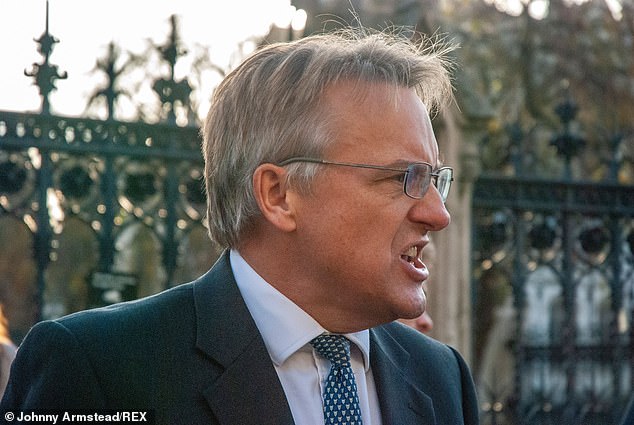 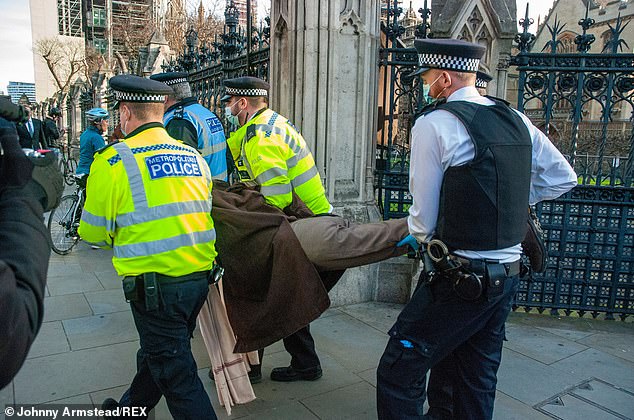 The protester is carried spread-eagled towards a waiting police van 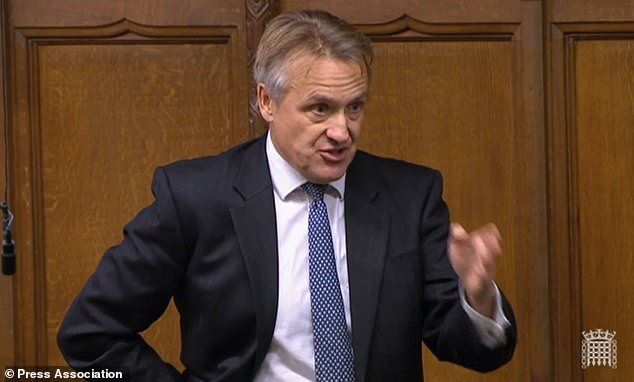 Sir Charles Walker, Conservative MP for Broxbourne, gave it both barrels in the chamber this afternoon after witnessing an elderly protester be carted off by police 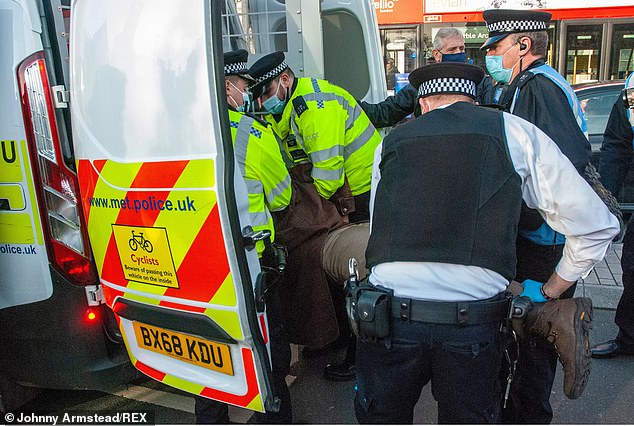 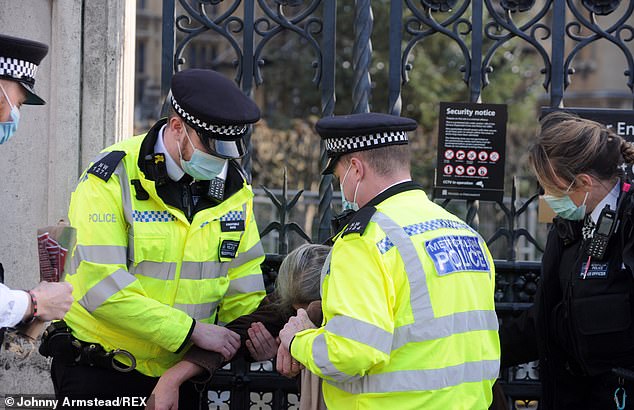 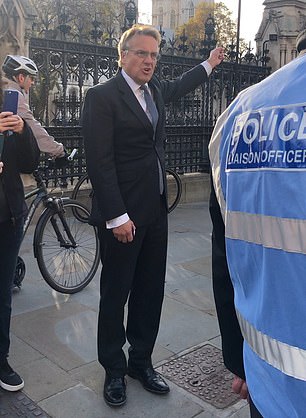 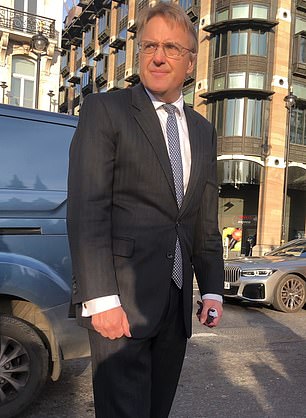 ‘Madam Deputy Speaker, will you bring the Prime Minister and/or the Home Secretary here today to sort this out?

‘She was an old lady robbed of her dignity for having the courage to protest about having her fundamental rights and those of my constituents and others removed.’

Responding to the point of order, deputy Commons speaker Dame Rosie Winterton said: ‘I thank the honourable gentleman for his point of order. I can see that this is obviously an extremely distressing situation.

‘I shall of course ensure that the Speaker (Sir Lindsay Hoyle) is aware of the honourable gentleman’s comments.

‘But I also know that we have ministers here who I’m sure will ensure that his comments are fed back and his very strong views on the incident that happened.’

Tom Ridgway, who witnessed the incident, said: ‘I saw an elderly woman, apparently an anti-lockdown protester, being bundled into the back of a police van at 2pm outside the entrance to Parliament.

‘I only saw one other protester who was shouting, it didn’t seem to be an organised protest.’

As Sir Charles walked across he said tot he officers: ‘You must have mothers? What an outrage! What a disgrace! This is an absolute disgrace.’ 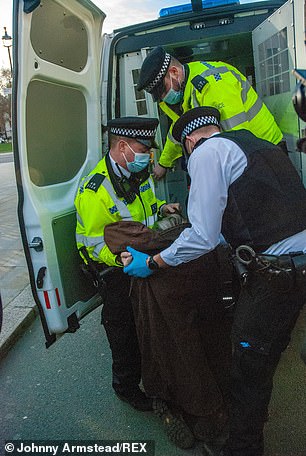 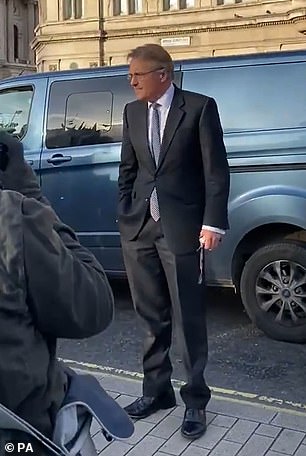 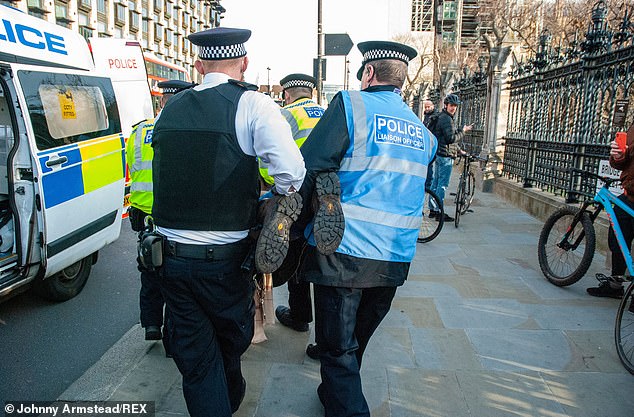 Elderly woman is carried off to the van by officers Tuesday 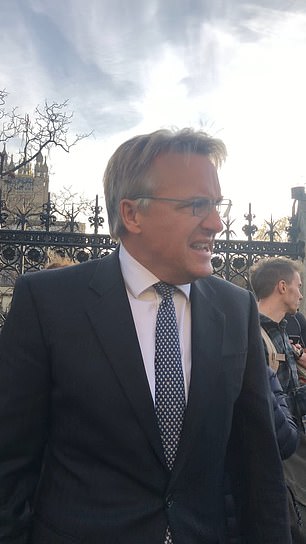 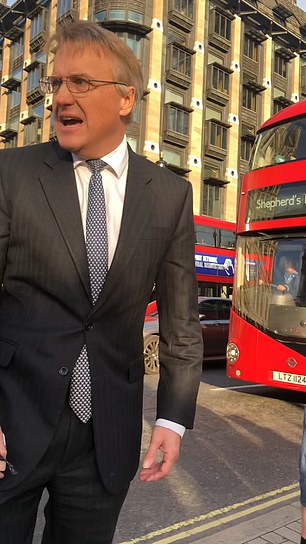 Sir Charles looks on anxiously as the shocking incident unfolds

In a statement, the Metropolitan Police said: ‘At 13:00hrs on Tuesday, 24 November, Police were on scene at a protest in Buckingham Gate, SW1.

‘A group had come together to protest. Police engaged with those present and explained the current restrictions around gatherings of more than two people.

‘Two women refused to engage and were subsequently arrested for breaching the coronavirus restrictions.

‘A short while later part of the group had re-gathered outside the Palace of Westminster. A third woman refused to comply, was arrested for breaching the coronavirus restrictions and then became uncooperative with officers.

‘She was taken by police transport to custody.’

Jumblatt: The appointment of Robert Malley as the special envoy to Iran is an ominous sign

Premier League transfers: Is this the most difficult transfer window ever?

How to create a dream home: Best Of Houzz 2021 Awards revealed

Manchester United manager Ole Gunnar Solskjaer says there will be "no big inquest" despite a shock...