A tourist has allegedly been decapitated with a sickle in Thailand by a local man who attacked him and his friend because they were ‘playing loud music as they sat drinking beers’.

The victims were attacked in the early hours of Saturday in Kanchanaburi, central Thailand, according to local media reports.

Police were called to the scene around 3:50am on Saturday and found the victim shirtless but wearing a pair of black shorts lying face down in a pool of blood with knife wounds to his neck.

Nearby was his friend who was rushed to hospital in a critical condition, police said, adding that they found a pair of shows and a sickle, which they suspected was the murder weapon, at the scene.

Police said they had arrested a 23-year-old local man with a history of mental health issues in connection with attack and had sustained injuries consistent with a knife fight.

The suspect allegedly attacked the pair after becoming enraged that they were playing loud music from a radio into the early hours of Saturday morning after they started drinking around 9pm. 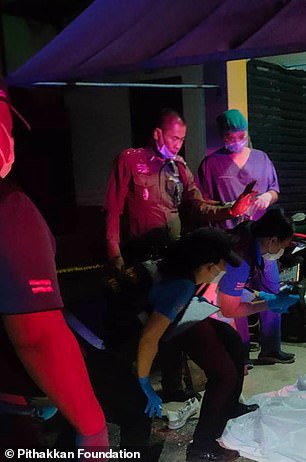 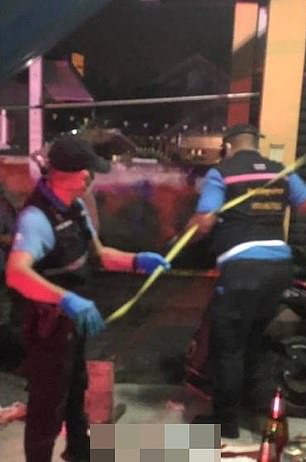 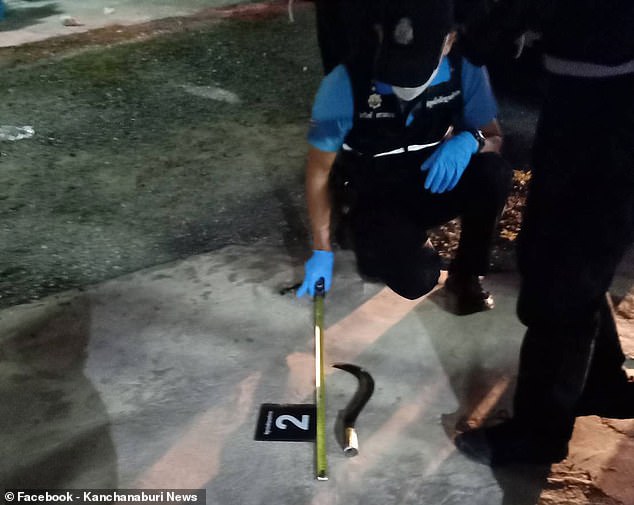 Mueang Police found a pair of shows and a sickle, (pictured) which they suspected was the murder weapon, at the scene

The alleged attack took place outside a rented room at the Soi Sri Lanka in Mueang, Kanchanaburi.

A neighbour, who was a relative of the dead victim’s girlfriend, told police he was woken by a loud noise early on Saturday.

When he went to see what the commotion was, he found the two victims, the Bangkok Post reported.

Pictures showed the scene swarming with police officers with streams of thick red blood, spattered walls and a stash of empty beer bottles.

Mueang Police said the suspect was a local resident and was remanded in custody with injuries consistent with a knife fight.

But it was later reported the man taken into police custody was injured after he was attacked by neighbours who believed he was the perpetrator.

Police Colonel Somkiart Chomchai said a team of police, including forensic officers, were dispatched to the scene to collect evidence.

Schwarzenegger was involved in a multi-vehicle accident