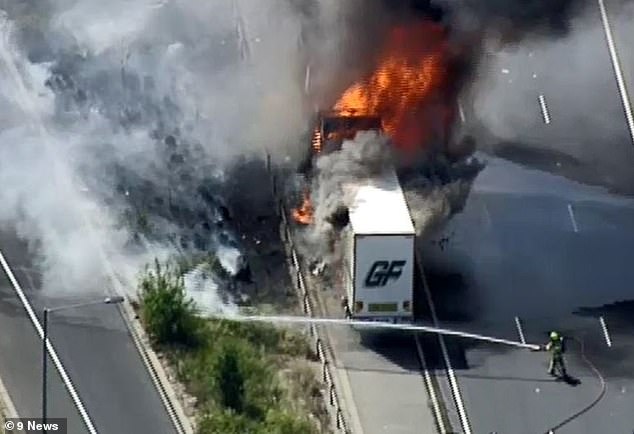 A truck has exploded into flames on a busy freeway, sparking traffic chaos as firefighters work to control the blaze.

The B-Double caught fire outbound on Melbourne‘s Eastern Freeway in Doncaster, near the Elgar Rd exit ramp, around 11am on Monday.

Emergency crews were seen blasting water at the burning vehicle, which appears to have been completely gutted by the flames.

The driver escaped from the vehicle unscathed and there have been no other reported injuries.

The freeway has been closed in both directions, with drivers urged to use Doncaster Rd or Whitehorse Rd

‘The truck is believed to contain toilet paper which is causing a significant amount of smoke and some spot fires in adjoining median strips,’ the FRV spokesperson said.

‘Four pumpers, three pumper tankers and two specialist vehicles are being supported by two CFA appliances and have now brought the incident under control.’

A number of people stopped on a nearby overpass to watch the incident, while a queue of traffic stretched down the freeway.

The freeway has been closed in both directions, with drivers urged to use Doncaster Rd or Whitehorse Rd.

Emergency crews, including officers from Victoria police and VicRoads, are managing the scene and will reopen the Freeway to traffic once the area is cleared.

The blaze completely gutted the truck, turning the semi trailer into a pile of ash

Brazil records 28,323 cases and 592 new deaths from the Coronavirus