Millions of people are being monitored for social distancing as part of a government-backed project secretly rolled out across Britain, the Mail can reveal.

In what campaigners call a sign the country is heading to a ‘truly dark place’, at least 363 cameras originally installed to monitor traffic flow have been switched – without public consultation – to snoop on pedestrians.

An investigation revealed that Vivacity Labs, the company behind the Artificial Intelligence camera technology, was awarded almost £50,000 by the Department for Business, Energy and Industrial Strategy [BEIS] in June to ‘improve the collection of social distancing data’.

The brief from public body Innovate UK – funded by BEIS – said pedestrians in 16 cities would be monitored for how close they are to one another in public places to ‘help the Government plan the removal of lockdown measures’.

A watching brief: An image from the Vivacity Labs website. The company says it is for marketing purposes only and does not reflect how the technology is actually used

Vivacity refused to reveal where its cameras were, citing ‘commercial confidentiality’. But the Mail can reveal they are monitoring social distancing across large swathes of the country, including Liverpool, Oxfordshire, Cambridgeshire, Warwickshire, Manchester, Bournemouth, Peterborough and Westminster.

Vivacity – whose Cambridge-educated founders created the social distancing tech to ‘help inform [government] policy decisions’ – also has a ‘confidential’ contract to provide the Department for Transport with monthly updates on adherence to social distancing from its cameras across Britain. In addition, the Behavioural Insights Team quango, part-funded by the Cabinet Office, cited Vivacity data in a report about reducing the two-metre rule to one metre.

Despite the widespread and potentially life-changing use of the data, pedestrians have remained unaware their movements are being tracked because neither the Government nor many of the councils who approved the installation of cameras consulted the public on their change of use.

In an interview last month, Mark Nicholson, one of Vivacity’s founders, said the technology could soon be expanded to carry out temperature checks ‘depending on how far down the ‘Big Brother’ route we want to go’.

Unaware: A pedestrian under the cameras

Former Conservative Party leader Sir Iain Duncan Smith said last night: ‘This is the kind of stuff that China does.

‘The reason why you film cars is to stop road accidents and things like that. You don’t film people going about their daily business so you can report on their comings and goings. It’s becoming mad.

‘We are losing our inalienable freedoms. Covid is destroying the very nature of what it is to be in a democracy under the rule of law and protected freedoms. The authorities are now using devices [to monitor people] which were not intended for that purpose. The Government should have informed the public but they shouldn’t be doing this in the first place.’

Edin Omanovic, of campaign group Privacy International, said: ‘If we can’t even walk in public without a tech company trying to profit from us or a government agency knowing about it we’re heading to a truly dark place.

‘Sensors we’re told are for monitoring traffic are later used to monitor social distancing, and surely no one is naive enough to think that it’ll end there. You have to draw a line somewhere.

‘The fact that they secretly sought to repurpose the cameras shows a shocking disregard for transparency, local authorities, and the public.’

Vivacity’s patented ‘sensors’ contain an artificially intelligent camera which can differentiate in real-time between modes of transport such as cars, bicycles, lorries and pedestrians. The sensors can be specifically installed or attached to existing CCTV cameras. The vast majority of video is deleted within seconds, though occasionally footage is viewed by the company’s designers when testing improvements to software.

When the company improved the technology so it could analyse whether pedestrians were complying with the two-metre rule, Vivacity approached more than 30 councils it was working with, as well as the Government, to see if they would be interested in using the data.

The cameras are able to identify areas where people are walking less than two metres apart. The current method does not identify individuals so could not be used for enforcement. Despite privacy fears, no councils contacted by the Mail conducted a public consultation on changing the use of the cameras. Under data protection legislation, they were not legally obliged to consult the public because Vivacity’s sensors are not classed as ‘recording personal data’, with the majority of recordings deleted within seconds.

But Mark Gracey, an expert in the legislation, said: ‘There may be a public expectation that there should be notification of the change in the purpose of the technology.’ A spokesman for the Information Commissioners’ Office said it was important for creators of monitoring or surveillance technology in ‘publicly accessible places’ to be ‘transparent about how it is being used’. 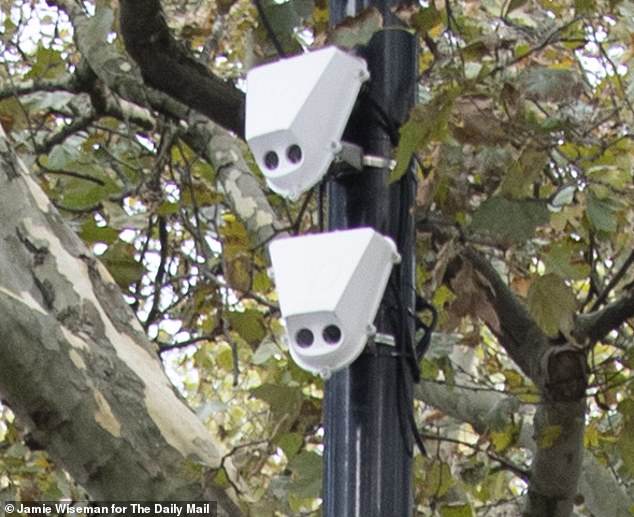 Close-up: Despite the widespread and potentially life-changing use of the data, pedestrians have remained unaware their movements are being tracked because neither the Government nor many of the councils who approved the installation of cameras consulted the public on their change of use

Earlier this year, Vivacity was awarded a £49,481 grant from Innovate UK, which invests in science and research in Britain, to monitor social distancing. Describing the six-month project, a brief said: ‘The police are under significant pressure, with many of their ranks in isolation. Being able to target lockdown enforcement to areas where there is a higher number of social interactions (less than two metres) is important.’

The company said it would use the money to improve its analysis and ‘measure the duration of interactions – the longer people interact, the increased risk of infection’.

Concerns over the use of the Vivacity sensors emerged at a scrutiny committee of Kent County Council earlier this month when plans to install the cameras were discussed.

After the council was ‘advised’ that the technology could be used to monitor social distancing, Conservative councillor Rory Love said ‘serious questions should be asked’.

‘I am worried about ‘mission creep’ and how technology like this can come into our lives for one purpose and then change to another,’ he told the Mail.

‘If we allow technology to start monitoring social distancing, what’s next?

‘And if these kind of sensors are to be used in cities, there ought to be public consultation and scrutiny about whether we allow it.’

The Department for Transport (DfT) refused to answer seven detailed questions over how it uses the data from Vivacity on social distancing. A spokesman for the Department for Business said Innovate UK was ‘funding short-term projects that address and mitigate the health, social, economic, cultural and environmental impacts of the Covid-19 outbreak’.

A Vivacity spokesman said the technology cannot differentiate between household groups and strangers, meaning it could not make a judgement on whether social distancing is being adhered to or be used as part of enforcement.

He said the technology can merely illustrate the changes in people’s behaviours before and after lockdown restrictions are put in place, adding: ‘Our data has only been used to inform the statistical view of overall measurement of social distancing.’

Co-founder Peter Mildon said he was ‘very happy when I go to sleep at night that we are not creating Big Brother’. He added that he could not discuss the DfT contract because there was a ‘confidentiality clause’.

Cambridgeshire County Council said it had agreed with Vivacity and the DfT to ‘use sensory data from our cameras as part of the Covid-19 response, including monitoring traffic flow and social distancing’.

Oxfordshire County Council said it had received reports on social distancing from Vivacity which could be used to ‘inform ourselves of pinch-point issues’, but they were not actively being monitored.

Authorities in Manchester and Liverpool said they were not consulted over the change in use of the sensors and had not seen any data from Vivacity.

Councillor Mike Greene, of Bournemouth, Christchurch and Poole council, said it was ‘aware the sensors can approximate the distance between pedestrians and that Vivacity have been studying social distancing but not in a way that identifies individuals’.

Warwickshire County Council said it did not carry out a public consultation because the change in use was ‘an urgent measure in response to the pandemic’.

A Department for Transport source said the social distancing data was not being used to inform government decisions on coronavirus measures.