Tragic twist in the stabbing death of a beloved disabled man, 70, in Perth 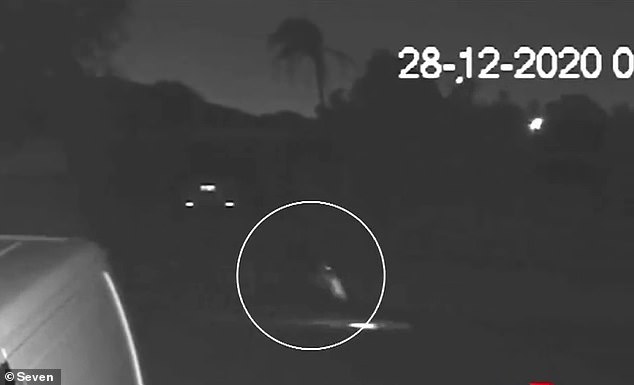 An elderly disabled man didn’t even need to travel to work on the day he was allegedly murdered at a train station during his commute.

Allan Thomas was allegedly stabbed to death by Lex Gerald Pickett, 52, at Queens Park station in Perth at 5.50am on Monday.

The 70-year-old had been on his way to work at a Good Samaritans charity shop – a job he held for 50 years – but he forgot the shop was closed.

Charity boss Melanie Kiely said Mr Thomas should not have been travelling to work that day because it was the Boxing Day public holiday.

Pictured: Security footage of Mr Thomas making his way to work moments before his death at 5.50am on Monday

‘He just got confused and, despite everyone telling him it was a public holiday, he was going to come to work and he didn’t even need to be there,’ Ms Kiely told 7 News.

Police have not released details of Mr Thomas’ injuries but a cooler bag containing wrapped Christmas presents and a lunch box were strewn on the train tracks after the alleged murder.

Mr Thomas was rushed to Royal Perth Hospital in an ambulance but later died from his injuries.

Ms Kiely said her colleagues were deeply saddened when the learned of their ‘loyal’ and ‘friendly’ co-worker’s horrific death.

A 52-year-old man faced court on Tuesday charged with the murder after Allan Thomas. Pictured” forensic officers collecting evidence at the scene

‘We were in the process of planning his celebration for having worked there, and contributed so much to our organisation for 50 years,’ she told The West.

‘There are many people there who have worked with him for decades who are absolutely devastated this has happened.’

Workers were also concerned for their safety, and Ms Kiely said she would ‘hate Allen’s death to be in vain’.

‘I think, if anything, we should stand up and say “what can we do to make things safer?”.’

Police, pictured at the Queens Park train station on Monday, have not released details of Mr Thomas’ injuries

Pickett was charged with murder and appeared briefly in Perth Magistrate’s Court on Tuesday.

The court was told that following an assessment from a mental health nurse, it was recommended Pickett be issued with a hospital order.

Pickett, who was charged with after spending almost 12 hours in custody, had been cooperating with police, the court heard.

He was understood to be have been a patient at Greylands Hospital, a psychiatric hospital in Mt Claremont.

Pickett will next appear in court on January 5.

Michael Papas, a neighbour of 20 years, fought back the tears as he described Mr Thomas’ ‘kind heart’.

‘He was a gentle man, he was fantastic. This has shocked us badly. Everyone who knows him, loves him. The people over the road know him, everyone knows him,’ he told The West Australian.

‘I mean, you know, everybody in my family knows him. Mother, father, sisters. They all know him. I told my mother and she was in tears,’ he said.

Mr Papas said his friend went out of his way to help others and say hello.

Mr Thomas lived on the same street for more than 30 years and was a regular at the Zone Bowling Club in Cannington, where he would bowl on Wednesdays with a disability group.

Club employees said he was a ‘kind’ soul who was always up for a chat.

IGA supermarket workers also broke down when they heard of his death.