Time for a vanishing spell! Moment commuter train ruins Harry Potter fans’ view of the Hogwarts Express as it passes through Scottish station

Harry Potter fans were left furious after they queued for hours to catch a glimpse of the Hogwarts Express, only for a ScotRail train to block their view.

The Jacobite steam train travelled through Drumry train station in Dunbartonshire on its return journey from Carnforth in Lancashire on Monday.

The famous locomotive and carriages starred in several installments of the world-famous Harry Potter movie franchise.

Dedicated Harry Potter fans, including young children, had piled into the station and gathered across both platforms to catch a glimpse of the recognisable train.

But excitement turned into disappointment for fans on one platform. Just as the Hogwarts Express came into sight, their view was blocked by the 4.12pm ScotRail train to Dalmuir, which passed through the station at precisely the same time.

Footage posted on Twitter shows the commercial train speeding in front of the crowds of Harry Potter fanatics, while one woman is heard repeatedly swearing after the unfortunate timing.

Harry Potter fans flocked to Drumry train station in Dunbartonshire to see the Hogwarts Express. But fanatics on one platform were disappointed as a ScotRail train (left) passed in front of them at the same moment, blocking their view until the locomotive sped away (right) 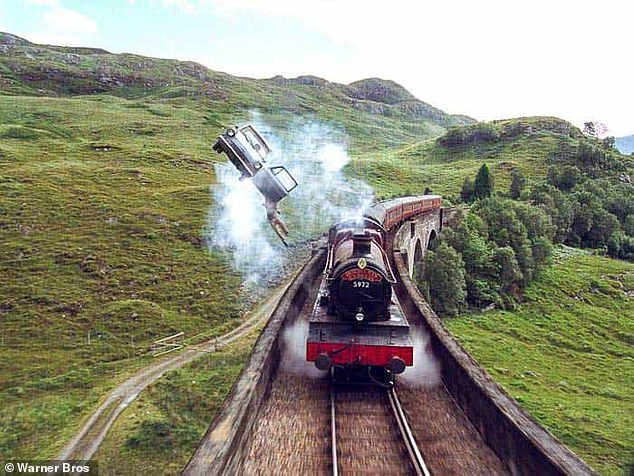 West Coast Railways gave Warner Brothers permission for the The Hogwarts Express to travel over the famous Glenfinnan viaduct (above), which features on the Jacobite’s train route 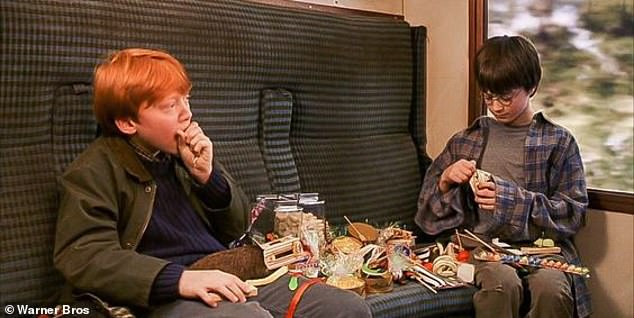 Traditional train carriages on the steam-locomotive hauled Jacobite train were used in the filming of the Harry Potter movies, starring Daniel Radcliffe and Rupert Grint

The woman laughs as she says: ‘Of course that’s going to have happened.’

Meanwhile fans on the other platform at Drumry train station are heard shrieking in delight as they are able to see the traditional steam train in all its glory.

By the time the ScotRail train clears from view, furious fans are only able to see the back of the steam train speeding off into the distance.

But some fanatics managed to see the funny side of the unlucky incident, with one person saying on Twitter: ‘Everyone buzzing about this Harry Potter Train, can’t help myself but laugh at the people at Drumry Station.

‘Platform one on route to Hogwarts Express Platform two the 16.12 to Dalmuir just going about their business.’

Another joked: ‘Sometimes we all pick the wrong side.’

Traditional carriages on ‘The Jacobite’ train were used in the filming of Harry Potter, with West Coast Railways also sourcing a suitable steam engine for Warner Brothers.

Hundreds of Harry Potter fans queued at various train stations across Scotland to try and catch a fleeting glimpse of the iconic locomotive. 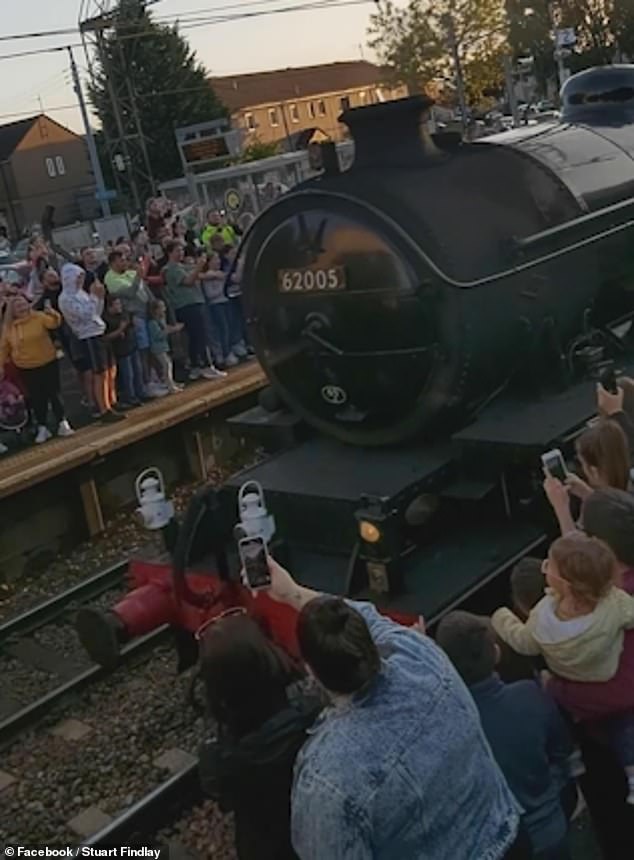 On the opposite platform at Drumry train station, other Harry Potter fans shrieked in delight as they were lucky enough not to have their view obscured by the passing train

But the fans of the franchise were slammed as ‘idiotic’ on social media after piling on to the station’s platform, with locals claiming they ignored coronavirus social distancing guidelines.

Many people who saw pictures and videos of the scene claimed that fans in the large crowd had not worn face masks and were not staying two metres away from each other.

One person took to Twitter to express their anger, saying: ‘Yes, it’s a train from Harry Potter, but I think there are much more important things going on.’

West Coast Railways allowed the famous wizarding train to use the route of The Jacobite train, including passing over the scenic famous Glenfinnan viaduct.

The 5972 Olton Hall is the model that became famous in the early 2000s as the face of the Hogwarts Express.

The Jacobite is a real-life steam-locomotive hauled tourist train service, which runs across iconic settings in Scotland.