Manchester United are delaying a decision on 33-year-old Argentine goalkeeper Sergio Romero’s future until a plan for Dean Henderson’s development is finalised, with the Englishman, 23, in line for a January loan move. (ESPN)

Olivier Giroud is considering his future at Chelsea and the striker, 34, previously linked with Inter Milan, could seek a move to ensure that he is in the France squad for next summer’s European Championship. (Football London)

Manchester United could miss out on Ousmane Dembele in January, with Barcelona now prepared to give their out-of-favour France forward, 23, a starring role in the absence of injured Ansu Fati. (Sport – in Spanish)

Chelsea’s attempts to sign former Nottingham Forest defender Anel Ahmedhodzic from Malmo are being blocked, according to the 21-year-old Bosnian’s father. (Sun)

Manchester United have blocked defender Victor Lindelof, 26, from linking up with the Sweden squad for their friendly with Denmark because of Covid-19 travel restrictions currently in place throughout the United Kingdom. (Goal)

Liverpool have closed the door for the final time at their training base of more than 60 years, Melwood. (Liverpool Echo)

English left-back Aaron Cresswell, 30, wants West Ham to build on their new-found stability under David Moyes after the Hammers boss said his team were no longer a “flaky” side. (London Evening Standard) 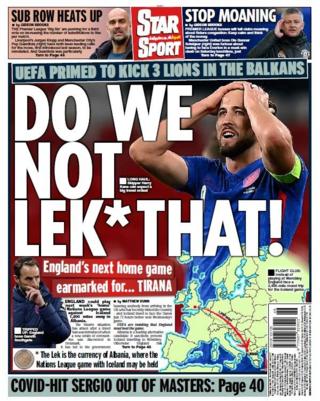 Britons worry life received’t get again to regular till no less than NEXT summer time amid...