Dortmund could be willing to sell Haaland this summer – a year before his £70m release clause becomes active – but would demand up to £150m. (Star)

Chelsea’s England striker Tammy Abraham, 23, is unwilling to enter contract talks while the club continues to be linked with Haaland. (Metro)

Manchester United manager Ole Gunnar Solskjaer has admitted he keeps in touch with Haaland, who he coached during his time at Molde. (Sky Sports)

Henderson has become increasingly frustrated at a lack of playing time at Old Trafford. (Sky Sports)

Norwich City hope to receive up to £35m for English full-back Max Aarons, 21, who is a target of Manchester United. (Metro)

Everton are also considering a move for Aarons. (Sky Sports)

Everton are yet to make contact with Norwich over a deal for Aarons and anticipate competition from Manchester United, Bayern Munich and Barcelona. (Mail)

Norwich rejected a bid from Roma for defender Aarons in the January transfer window. (Sun)

Crystal Palace’s Dutch full-back Patrick van Aanholt has opened talks with an unnamed Champions League club. The 30-year-old is out of contract at Palace in the summer. (Football Insider)

Serie A sides Juventus, Inter Milan and Roma are keen on signing Mata once he becomes a free agent at the end of the season. (Sun)

Sunderland will attempt to sign Wolves’ English defender Dion Sanderson, 21, on a permanent basis at the end of the season. (Mail)

Tottenham plan to sell goalkeeper Paulo Gazzaniga on a permanent deal this summer. The Argentina international, 29, joined Spanish club Elche on loan at the end of the January window. (Football Insider) 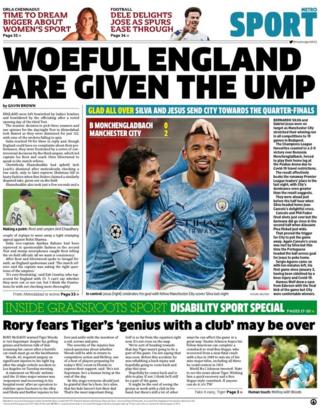 The back page of The Metro

DEREK LAWRENSON: Even for Miracle Man Tiger Woods, another comeback seems a challenge too far