France midfielder Paul Pogba could leave Manchester United as early as this summer, with Juventus keen to re-sign the 28-year-old and willing to consider offloading Argentina striker Paulo Dybala, 27, in a swap deal. (Tuttosport – in Italian)

Tottenham are confident of keeping England striker Harry Kane, 27, and will not consider selling him to another Premier League club, amid mounting interest from Manchester City and Manchester United. (Manchester Evening News)

Bayern Munich are interested in Tottenham forward Son Heung-min, 28, and are willing to be patient in their pursuit of the South Korean, who is contracted to Spurs until the summer of 2023 and has had a new long-term deal offered to him by the London club. (Football Insider)

Barcelona are seen as favourites to sign 30-year-old defender Georginio Wijnaldum when his contract at Liverpool expires in the summer, but the Catalan club face competition from Chelsea, Juventus and Paris St-Germain. The Merseyside club themselves have not given up hope of keeping the Dutch international. (Marca)

Crystal Palace winger Andros Townsend, 29, says the club have told him and their other out-of-contract players that their futures will not be discussed until the end of the season. (Talksport)

Leeds United’s Spanish striker Rodrigo, 30, has dismissed rumours that he is unhappy at Elland Road and keen to move back to La Liga after just one season. (Leeds Live)

Striker Sergio Aguero, 32, would be the “perfect” signing for Juventus and could emulate the success of his former Manchester City and Argentina team-mate Carlos Tevez in Turin, says Juve great Franco Causio. (Gazzetta Dello Sport, via Goal)

Boca Juniors striker Tevez, 37, who has a 12-month option to extend his stay with the Argentine giants beyond this summer, is being linked with a move to the US. (ESPN)

Burnley manager Sean Dyche is seen as the leading candidate to become Crystal Palace’s new manager if 73-year-old Roy Hodgson does not extend his contract beyond this summer. (90min)

Real Madrid have turned Tottenham down after the London club made an approach for 19-year-old Spanish defender Miguel Gutierrez. (DefensaCentral, via Star)

Manchester United are willing to offer 23-year-old Dutch midfielder Donny van de Beek to Juventus as a part of a swap deal for France international Adrien Rabiot, 25. (Tuttosport, via Express)

Italy defender Giorgio Chiellini is keen to stay at Juventus beyond the end of his contract in the summer, says the 36-year-old’s agent Davide Lippi, but the Turin club are yet to offer him a new deal. (Sky Italia – in Italian) 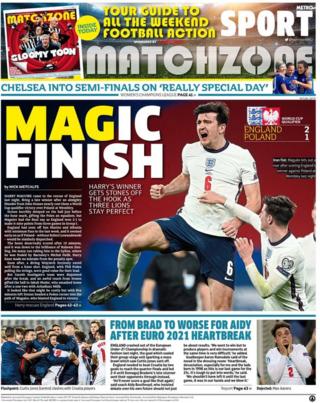 Queen, 94, 'got her second Covid jab' before facing the public without a mask