Manchester United have been told it will cost them Â£81.5m to sign England winger Jadon Sancho, 21, from Borussia Dortmund. (Mirror)

Duncan Ferguson, 49, has turned down a job on Carlo Ancelotti’s coaching staff at Real Madrid because he wants to become Everton boss. (Sun)

West Ham are confident David Moyes will sign a new long-term contract after talks with the 58-year-old manager, who has been linked with a return to Everton. (Football Insider)

Barcelona are considering making an improved offer to Netherlands midfielder Georginio Wijnaldum, 30, who is set to leave Liverpool on a free transfer, after Paris St-Germain eclipsed Barca’s initial offer. (Marca – in Spanish)

If Barcelona do not complete the signing of Wijnaldum and Netherlands forward Memphis Depay, 27, from Lyon next week it could hold up deals to sell up to four players. (Sport – in Spanish)

Next week Barca will offer a long-term extension to Ilaix Moriba, the 18-year-old Spanish midfielder who has one year left on his current deal and has been linked with Manchester City and Manchester United. (Marca – in Spanish)

Leeds United have been offered the chance to sign former loanee Eddie Nketiah this summer, with Arsenal wanting Â£20m for the English centre-forward, 22. (Football Insider)

Atletico Madrid are expected to make a new offer for Udinese’s Argentina midfielder Rodrigo de Paul, 27, who has also been linked with Liverpool and AC Milan. (Mundo Deportivo – in Italian)

Leicester are closing in on the signing of French midfielder Boubakary Soumare, 22, from Lille and remain interested in Tammy Abraham if the English striker, 23, leaves Chelsea this summer. (Leicester Mercury)

Burnley and Norwich are among several Premier League clubs who have asked Liverpool about taking Wales right-back Neco Williams, 20, on loan next season. (Teamtalk)

Brentford will bid to sign left-back Gabriel Fuentes, 24, from Junior FC in his native Colombia. (Sun)

West Brom have told Brazilian midfielder Matheus Pereira, 25, he can leave the Championship club this summer, if they are offered at least Â£15m. Aston Villa and Brighton are among those who have made enquiries. (Teamtalk)

After Barcelona confirm Ronald Koeman will stay on as coach, their former midfielder Xavi Hernandez, 41, says he turned the job down for a second time, with the Al-Sadd coach saying “it was not the moment”. (La Vanguardia via Sport – in Spanish)

Lincoln City manager Michael Appleton, 45, is the new frontrunner for the West Brom job, after the Baggies called off plans to appoint Chris Wilder. (Football Insider)

Bournemouth boss Jonathan Woodgate, 41, is in danger of being sacked, with Fulham boss Scott Parker, 40, top of the Cherries’ wanted list to replace him. (Sun)

Former Bournemouth manager Eddie Howe, 43, turned down Celtic as he is willing to bide his time for the Southampton job to come available. (Football Insider) 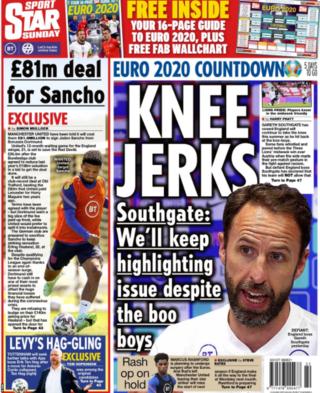 PMs have the toughest job in Britain. It's a travesty that we pay them little, writes ANDREW ROBERTS

KATE MANSEY: I nearly died of a burst appendix... after three GPs refused to see me face to face

Courtney Blades-Rogers impressed by Alabama's Montana Fouts, 21 years after her own perfect game