Manchester United have been scouting Bayer Leverkusen’s Burkina Faso centre-back Edmond Tapsoba, 22, after receiving a tip-off from a well-respected figure in Germany. (Express)

Wolverhampton Wanderers will listen to offers for Adama Traore, 20, at the end of the season but will probably have to accept a lower fee for the Spain winger than the £70m they were hoping for last summer. (Mail)

Real Madrid believe Manchester City will be their main obstacle in the pursuit of £100m-rated Haaland but are optimistic they can tempt him to the Bernabeu. (AS, via Mail)

Bayern Munich president Herbert Hainer says the Bundesliga giants will have the financial muscle to compete for the signature of Haaland despite reports declaring they have no interest in the striker. (Mirror)

English goalkeeper Dean Henderson, 23, expects to be Manchester United number one next season – with David de Gea facing an uncertain future at the club. (Sun)

However, Manchester United are also considering recruiting a new first-choice goalkeeper this summer in a move that places a question mark over the futures of both De Gea and Henderson. (Daily Record)

Tottenham Hotspur captain Hugo Lloris says England playmaker Dele Alli, 24, “switched on” after failing to secure a move away from the club in January. (Standard)

Brazilian winger Raphinha, 24, says he is “really happy” at Leeds United as transfer interest mounts from the likes of Liverpool. (Mirror)

Leeds have joined Tottenham and AC Milan in the race to sign Real Madrid’s Spain winger Lucas Vazquez, 29, on a free transfer. (Sport Witness, via the Sun)

Arsenal manager Mikel Arteta has told France Under-21 midfielder Matteo Guendouzi, 21, he has played his last game for the Gunners and will be sold at the next opportunity. (Football Insider, via Mirror) 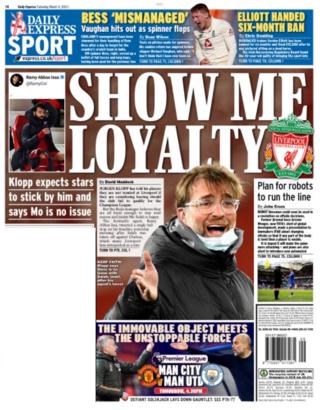 Agency: A Japanese tourist will head to the International Space Station on board a "Soyuz" missile in December