Aston Villa have been placed on alert after it emerged Chelsea are willing to accept about Â£40m for English striker Tammy Abraham, 23. (Mirror)

Real Madrid are set to announce the signing of Austria defender David Alaba, 28, on a free transfer from Bayern Munich when his contract expires this summer. (Mundo Deportivo – in Spanish)

Tottenham want to speak to Erik ten Hag about becoming their new manager after Jose Mourinho’s sacking. The 51-year-old is ready for a new challenge after four years as Ajax boss. (Guardian)

However, Spurs are still pursuing Leicester manager Brendan Rodgers, despite the Foxes boss ruling himself out of the running on Wednesday. (Mail)

Inter Milan have told Manchester City they are not willing to listen to offers for Belgium striker Romelu Lukaku, 27. (Calciomercato – in Italian)

Leicester will make a bid for Atalanta and Germany defender Robin Gosens, 26, should they secure Champions League qualification. (Tuttomercatoweb, via Team Talk)

Inter Milan are considering offering former England defender Ashley Young a new deal if they win the Serie A title this weekend. Watford are interested in signing their former trainee, 35. (Mirror)

Arsenal’s English midfielder Bukayo Saka, 19, says he did not hesitate before agreeing a new contract with the Gunners, despite interest from Borussia Dortmund and Liverpool. (ESPN)

West Ham and Newcastle are interested in signing Southampton’s Mario Lemina. The Gabon midfielder, 27, is currently on loan at Fulham and understood to be available for Â£7m. (Guardian)

Chelsea defender Andreas Christensen says he wants to sign a new deal with the Premier League club. The Dane, 25, is in his 10th year at Stamford Bridge. (Metro)

Leeds have rejected an offer from Legia Warsaw to take Polish playmaker Mateusz Bogusz, 19, on loan next season. (Football Insider)

Southampton are monitoring West Brom goalkeeper Josh Griffiths before a potential summer move for the 19-year-old, who has impressed on loan at Cheltenham this season. (Football Insider) 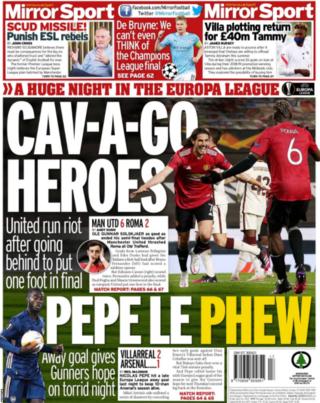 British drivers name their favourite UK routes - and it's Loch Lomond to Glencoe that's No1,