Transvestite, 47, is jailed for at least 19 years for murdering his mother, 86


A negligee-wearing transvestite has been jailed for at least 19 years for murdering his 86-year-old mother by stabbing her in the heart with a sword and then decapitating her.

Philip Tarver, 47, was wearing a frilly negligee when he killed frail Angela Tarver, 86, with an ornamental sword 32.4cm in length.

His father Colin, 84, managed to disarm him and when police arrived at the family home Tarver emerged waving a small Union Jack flag and announced: ‘I surrender.’

Officers found Mrs Tarver’s head in the freezer and her dismembered finger in the kettle.

Psychiatrists found Tarver was not mentally ill but he denied murder and shamelessly blamed his father, who sat at the back of the court with his head in his hands.

Judge Anne Molyneux jailed him for life with a minimum of 19 years and told him: ‘You sought to blame him (your father) for the murder.

‘He has spoken of the additional suffering this has caused him, saying in the course of the trial every aspect of his life and home has been laid bare for all to see. 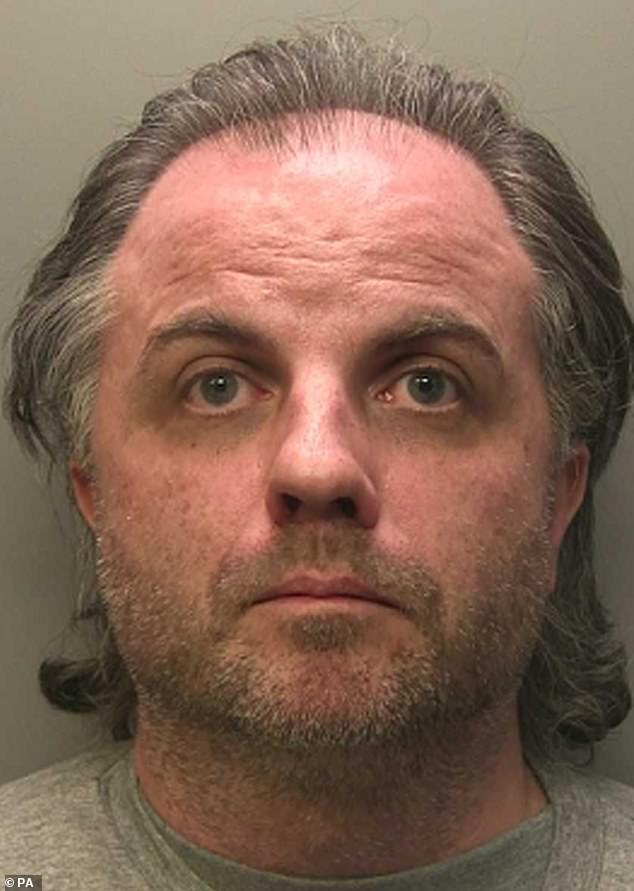 Philip Tarver (pictured), 47, has been jailed for at least 19 years for murdering his 86-year-old mother by stabbing her in the heart with a sword and then decapitating her

‘What has been shown is a man of great courage and dignity.

‘You left school at the age of 16. You went on to college. You had various jobs being a delivery driver.

‘You have not worked since January 2017. You were never married, you lived with your parents nearly all your life. Your mother bought you a car, you father paid the running costs.

‘You watched TV, played computer games and drank alcohol. You did not go to bed until 5am and sometimes not until 8am when your father was getting up.

‘Your mother was particularly vulnerable, she was frail, elderly, had limited speech and limited mobility. You dismembered her body.’

Colin Tarver said: ‘She was a devoted wife and grandmother. Despite having a severe stroke in June 1991 she was determined to carry on a normal of a life as possible.

‘Over the years she became more and more disabled but carried on despite this.

‘I have lost my best friend and the love of my life.

‘She was the light of my life and now the light has gone out, cruelly extinguished.’

Tarver had never moved out of the family home in Julian Close, Woking, Surrey, and was still being given pocket money.

The jobless watch mender dreamed of a career as a song writer but uploaded his ditties to social media platforms without success.

Mrs Tarver suffered a stroke in 1991 and had difficulty talking and used a zimmer frame.

Her son was one of two surviving children after a sister died in 1999 and he had lived at home all his life. The killer was found guilty of the murder of his mother Angela Tarver (pictured) at the Old Bailey this week. He was also found guilty of making threats to kill his father Colin Tarver, 84

His brother labelled him a scrounger but Tarver got his father to pay for a a bottle of vodka and six beers the night before the killing.

The following morning he came down the stairs hungover and wearing a women’s nightdress and began to ‘spring clean’.

He pulled the wires of the television from the wall, annoying his father because Mr and Mrs Tarver wanted to watch ‘Bargain Hunt.’

Mr Tarver shouted at his son and he stormed into the kitchen where his mother was having a cup of tea.

After he plugged the TV back in, Mr Tarver heard a scream from the kitchen where his wife had been drinking a cup of tea.

He ran into the room and found his wife lying on her back.

Seconds later he was confronted by his son brandishing the bloodstained ornamental sword shouting: ‘I’m going to kill you.’

Tarver had a demented look in his bulging eyes, the court heard.

The father struggled with his son and then ran out of the house to call the police.

When his father had left the house Tarver cut off his mother’s head and put it in an ‘Angry Birds’ box before placing it in the freezer.

Despite his confession, Tarver tried to blame his father who listened to his son’s allegations at the back of the court with his head in his hands.

Tarver had a history of cocaine and cannabis use, but psychiatric tests revealed he was responsible for his actions.

He denied murder but he was unanimously convicted of murder by the jury after 12 hours and 43 minutes deliberation.

Tarver shook his head after the jury’s verdict was read out and was later seen weeping in the dock.

Mr Tarver was still to upset to comment outside court.

Tarver, of Woking, Surrey, denied murder and making threats to kill but was convicted of both charges.

He was jailed for life with a minimum of 19 years for murder. He received 18 months concurrent for threatening to kill his father.

Hope For Healing Liver Disease In Your Dog Ebook/bundle/upsell