Having a poor diet may increase the risk of dangerous driving for truck drivers, a new study suggests.

A Beijing-based team of researchers looked at the diets of nearly 400 male truck drivers in Suzhou, China – a city west of Shanghai in the Jiangsu province.

They determined that drivers who ate more more junk food, snacks and animal proteins were more likely to be fatigued and drive dangerously, which could lead to car crashes.

Conversely, truck operators who ate vegetable-rich diets were more likely to be safer and more alert on the road. 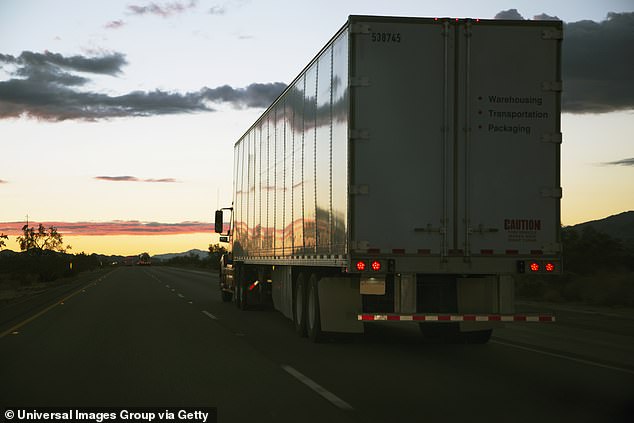 Truckers with poor diets are more likely to be fatigued, make errors and be aggressive drivers. A study in Germany found that many truckers eat poor diets as they eat a large portion of their food at truck stops, where there are not as many healthy options

Each of the drivers in the study, which is available Tuesday in the Occupational & Environmental Medicine journal, was given a survey, asking how often they ate each of 25 different types of food over the past 12 months.

Drivers were placed into categories according to their reported diets: vegetable rich, staple foods (like eggs, milk and other common items), animal proteins and snack foods.

They also completed Multidimensional Fatigue Inventory surveys, which judge physical and mental fatigue, and they were surveyed on their behaviors and attitudes while on the road.

Those who ate vegetable rich or staple food diets were found to have less fatigue and be safer drivers.

They were more attentive, made fewer errors while driving and were less aggressive with their driving.

Meanwhile, drivers with animal protein-based diets and those who were on snack food diets were more likely to be unsafe drivers.

All truckers in these two groups were likely to make more errors and be more aggressive than their peers, with drivers on snack food diets being especially unlikely to exhibit positive driving behaviors.

‘The results of this study support a relationship between dietary patterns and driving behavior in a sample of professional truck drivers,’ the researchers wrote.

‘Moreover, through the pathway analysis reported, it is possible to conclude that positive driving behavior can be predicted by prudent dietary patterns such as vegetable-rich diets, while some dangerous driving behaviors (errors, lapses and violations), can be predicted by unhealthy dietary patterns characterized by high intake of fats and [sugars].’

Drivers dietary pattern effects both their level of fatigue and driving behaviors, while fatigue can likely effect drivers behaviors as well

Both of the latter two categories were also associated with higher levels of fatigue.

There have long been links between eating a healthier diet and having more energy throughout the day, and being more attentive.

Truckers often eat at truck stops, and do not have time to cook for themselves, instead eating the food available to them at these stops.

Truckers who brought food from home were often eating healthier foods like fruits, vegetables and nuts rather than the meats, snack foods and sugary foods those who ate on the roads did.

The researchers also note that there are demonstrable links between making unhealthy life choices and also living a more dangerous lifestyle, as people who eat more unhealthy food are more likely to take unneeded risks.

They can not be 100 percent certain, though, according to their report.