President Donald Trump’s campaign has withdrawn a central part of its lawsuit seeking to stop the certification of the election results in Pennsylvania, shrinking the case to a small number of ballots.

Ahead of a Tuesday hearing in the case, Trump’s campaign dropped its allegation that 682,479 mail-in and absentee ballots were illegally processed without its representatives watching.

The campaign’s slimmed-down lawsuit, filed in federal court on Sunday, maintains the aim of blocking Pennsylvania from certifying a victory for Biden in the state and its claim that Democratic voters were treated more favorably than Republican voters.

Multiple major news outlets including the Associated Press, CNN and Fox News called the presidential contest for former Vice President Joe Biden on November 7, after determining that the remaining ballots left to be counted in Pennsylvania would not allow Trump to catch up.

Trump has refused to concede and insisted that Democrats stole the election from him as his campaign mounts tenuous legal battles in several key states that he lost.

The president pushed his message yet again on Sunday night, tweeting: ‘I WON THE ELECTION!’ 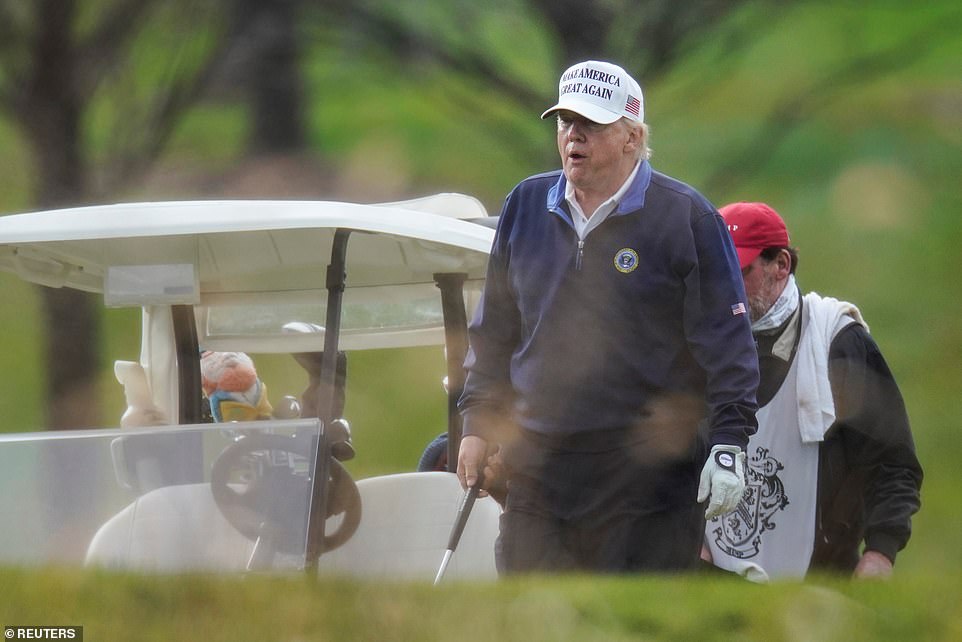 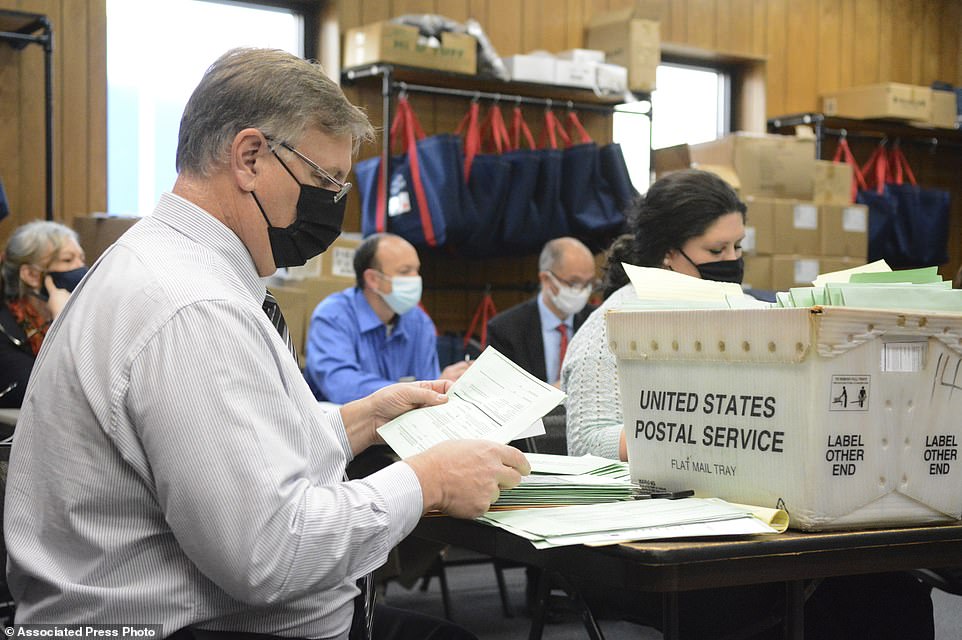 The Trump campaign’s slimmed-down lawsuit maintains the aim of blocking Pennsylvania from certifying a victory for Biden in the state and its claim that Democratic voters were treated more favorably than Republican voters. Pictured: Election Bureau Director Albert L. Gricoski (left) opens provisional ballots while poll watchers observe from behind at the Schuylkill County Election Bureau in Pottsville, Pennsylvania, on November 10

The remaining claim in the Pennsylvania lawsuit centers on disqualifying ballots cast by voters who were given an opportunity to fix mail-in ballots that were going to be disqualified for a technicality.

The lawsuit charges that ‘Democratic-heavy counties’ violated the law by identifying mail-in ballots before Election Day that had defects – such as lacking an inner ‘secrecy envelope’ or lacking a voter’s signature on the outside envelope – so that the voter could fix it and ensure that their vote would count, called ‘curing’.

Republican-heavy counties ‘followed the law and did not provide a notice and cure process, disenfranchising many’, the lawsuit said.

Cliff Levine, a lawyer representing the Democratic National Committee, which is seeking to intervene, said it isn’t clear how many voters were given the chance to fix their ballot. 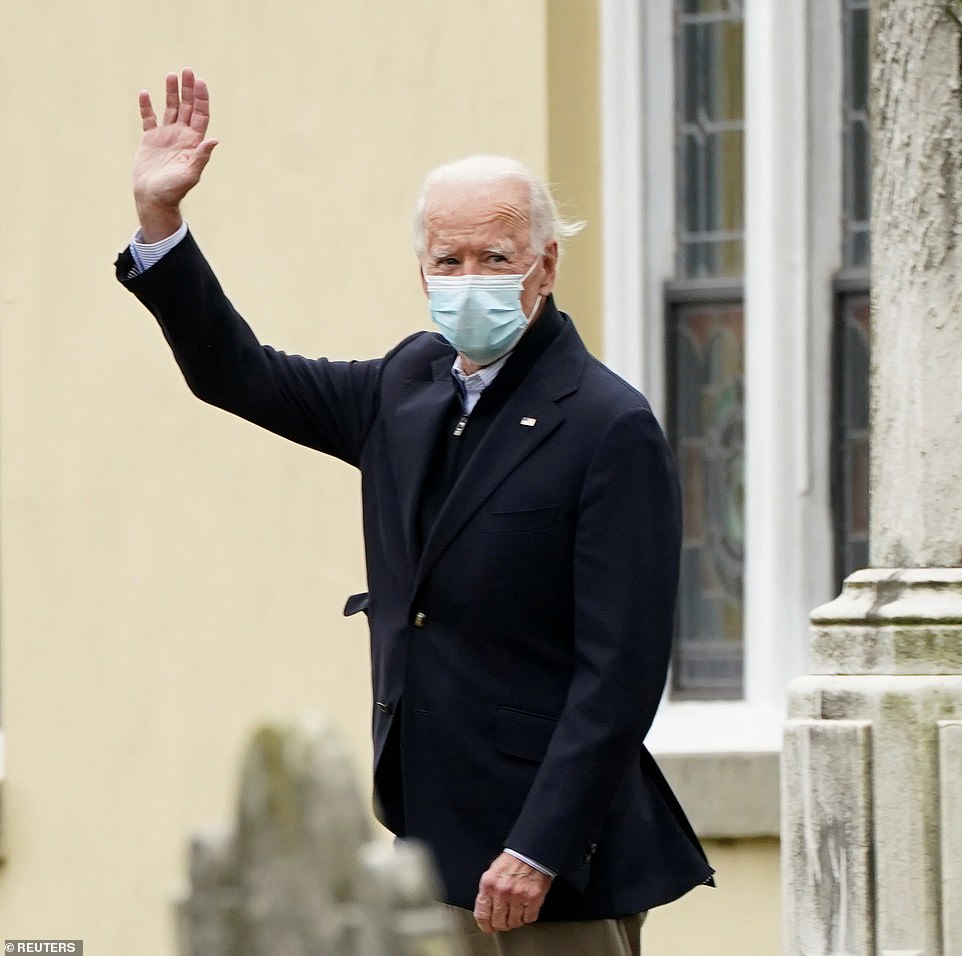 Multiple major news outlets including the Associated Press, CNN and Fox News called the presidential contest for Biden on November 7. Biden is seen leaving church in Delaware on Sunday

But, he said, it is minimal and certainly fewer than the margin – almost 70,000 – that separates Biden and Trump.

‘The numbers aren’t even close to the margin between the two candidates, not even close,’ Levine said.

In any case, there is no provision in state law preventing counties from helping voters to fix a ballot that contains a technical deficiency. Levine said the lawsuit does not contain any allegation that somebody voted illegally.

‘They really should be suing the counties that didn’t allow (voters) to make corrections,’ Levine said. ‘The goal should be making sure every vote counts.’

Pennsylvania’s top election official, Secretary of State Kathy Boockvar, a Democrat, responded in court on Sunday, asking the judge to dismiss the case.

State courts are the proper jurisdiction for the subject, and the lawsuit contains no ‘plausible claim for relief on any legal theory’, the state’s lawyers wrote.

More than 2.6 million mail-in ballots were reported received by counties, and there has been no report by state or county election officials or a prosecutor of fraud or any other problem with the accuracy of the count. 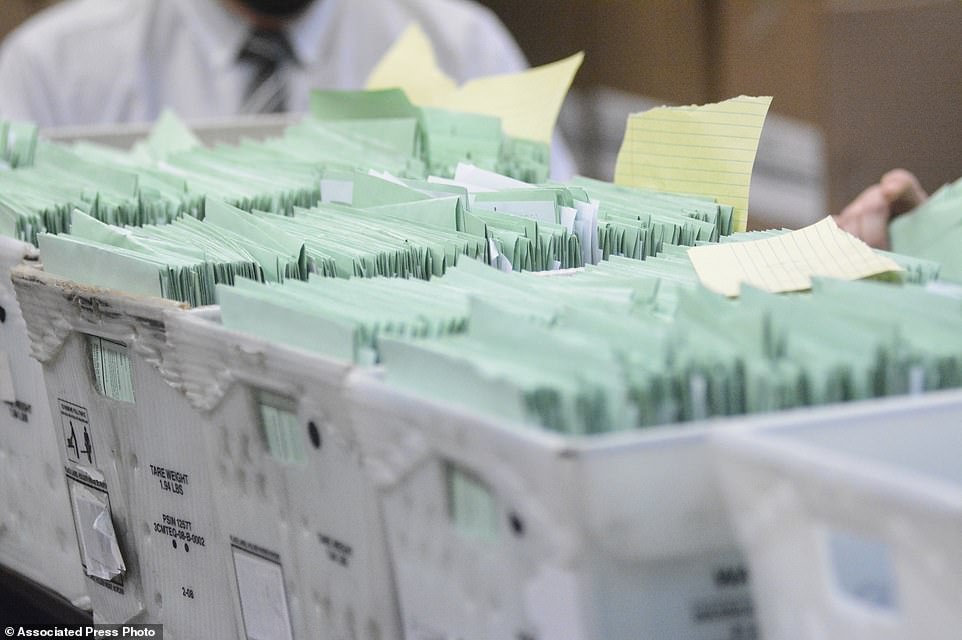 Pennsylvania is due to certify election results next week. Pictured: Uncounted provisional ballots sit in boxes at the Schuylkill County Election Bureau in Pottsville on November 10

A key theme of Trump and his supporters has been their claim that Philadelphia – a Democratic bastion where Trump lost badly – had not allowed Trump’s campaign representatives to watch mail-in and absentee ballots processed and tabulated.

However, Republican lawyers have acknowledged in a separate federal court proceeding that they had certified observers watching mail-in ballots being processed in Philadelphia.

Governor Tom Wolf’s administration has said that ballot watchers from all parties had observers throughout the process and that ‘any insinuation otherwise is a lie’.

Pennsylvania is due to certify its election results next week on November 23.

Trump appeared to admit for the first time that Biden won the election in a tweet on Sunday morning – but quickly clarified that he still believes he is the rightful winner.

‘He won because the Election was Rigged,’ he wrote. ‘NO VOTE WATCHERS OR OBSERVERS allowed, vote tabulated by a Radical Left privately owned company, Dominion, with a bad reputation & bum equipment that couldn’t even qualify for Texas (which I won by a lot!), the Fake & Silent Media, & more!’

He also claimed that many of the suits involving election results were not being filed by his campaign.

‘Our big cases showing the unconstitutionality of the 2020 Election, & the outrage of things that were done to change the outcome, will soon be filed!’ he wrote.

Legal experts say the lawsuits are a long-shot, with little chance of changing the outcome of the election.

A senior Biden legal adviser dismissed the litigation as ‘theatrics, not really lawsuits’. 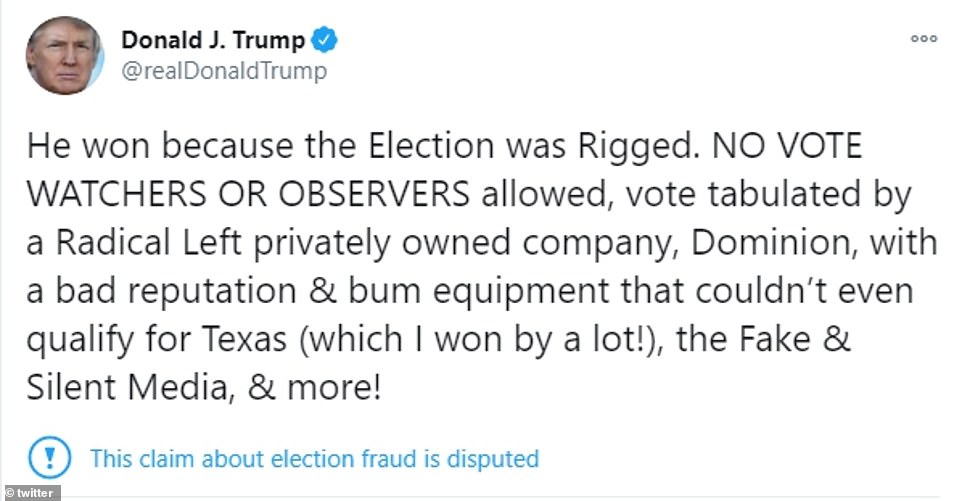 GOP leaders in Pennsylvania and three other battleground states – Arizona, Wisconsin and Michigan – have said they will not participate in Trump’s legally suspicious schemes to flip their electors for the incumbent.

The lawmakers noted that choosing electors to cast their vote for a candidate not selected by the people would violate state law and voters’ trust in election integrity.

‘I do not see, short of finding some type of fraud, which I haven’t heard of anything – I don’t see us in any serious way addressing a change in electors,’ Rusty Bowers, Arizona’s Republican House speaker, said. 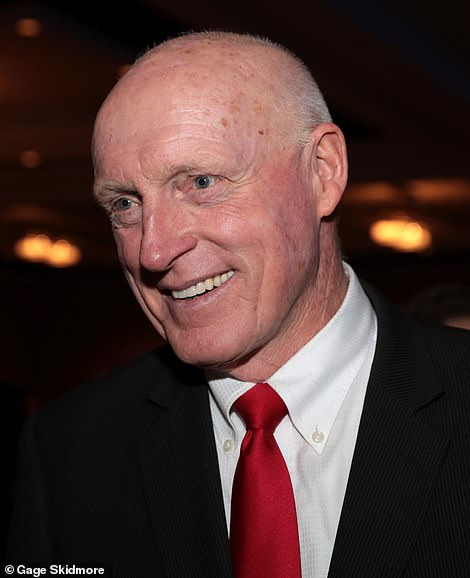 ‘I do not see, short of finding some type of fraud, which I haven’t heard of anything – I don’t see us in any serious way addressing a change in electors,’ Rusty Bowers (pictured), Arizona’s Republican House speaker, said

Bowers says he has been inundated with emails pleading for the legislature to intervene in the election.

‘They are mandated by statute to choose according to the vote of the people,’ he added.

The Republican leader of Wisconsin’s Assembly, Robin Vos, has also long dismissed the idea. His spokesperson, Kit Beyer, said he stood by that position on Thursday.

In Michigan, legislative leaders say any intervention would be against state law.

Even though the GOP-controlled legislature is investigating the election, state Senate Majority Leader Mike Shirkey told radio station WJR on Friday, ‘It is not the expectation that our analysis will result in any change in the outcome.’

The idea of having electors vote against the people loosely involves GOP-controlled legislatures dismissing Biden’s popular vote wins in their states and opting to select Trump electors instead.

While the endgame was unclear, it appeared to hinge on the expectation that a conservative-leaning Supreme Court would settle any dispute over the move.

Still, it has been promoted by Trump allies, including Florida Governor Ron DeSantis, and is an example of misleading information and false claims fueling skepticism among Trump supporters about the integrity of the vote.

The theory is rooted in the fact that the US Constitution grants state legislatures the power to decide how electors are chosen.

Each state already has passed laws that delegate this power to voters and appoint electors for whichever candidate wins the state on Election Day.

The only opportunity for a state legislature to then get involved with electors is a provision in federal law allowing it if the actual election ‘fails.’

If the result of the election was unclear in mid-December, at the deadline for naming electors, Republican-controlled legislatures in those states could declare that Trump won and appoint electors supporting him. Or so the theory goes.

The problem, legal experts note, is that the result of the election is not in any way unclear. Biden won all the states at issue.

It’s hard to argue the election ‘failed’ when Trump’s own Department of Homeland Security reported it was not tampered with and was ‘the most secure in American history’. 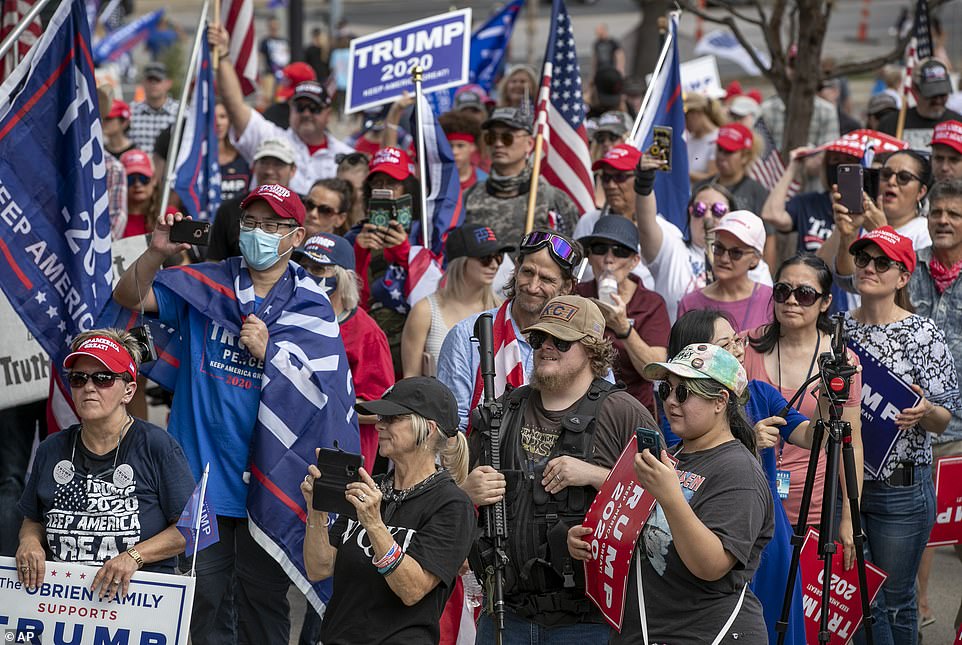 There has been no finding of widespread fraud or problems in the vote count, which shows Biden leading Trump by more than five million votes nationally.

But so far, Trump and Republicans have had meager success – at least 10 of the lawsuits have been rejected by the courts in the 12 days since the election.

The most significant that remain ask courts to prevent Michigan and Pennsylvania from certifying Biden as the winner of their elections.

But legal experts say it’s impossible for courts to ultimately stop those states from appointing electors by the December deadline.

‘It would take the most unjustified and bizarre intervention by courts that this country has ever seen,’ said Danielle Lang of the Campaign Legal Center.

‘I haven’t seen anything in any of those lawsuits that has any kind of merit – let alone enough to delay appointing electors.’

Even if Trump won a single court fight, there’s another potential roadblock: Congress could be the final arbiter of whether to accept disputed slates of electors, according to the Electoral Count Act of 1887, the law outlining the process.

In the end, if the Democratic-controlled House and GOP-controlled Senate could not agree on which electors to accept, and there is no vote and no winner, the presidency would pass to the next person in the line of succession at the end of Trump and Vice President Mike Pence’s term on January 20. That would be House Speaker Nancy Pelosi, a Democrat.

‘If this is a strategy, I don’t think it will be successful,’ said Edward Foley, a constitutional law professor at Ohio State University. ‘I think we’re in the realm of fantasy here.’

'Time is very, very short': Irish FM says EU and UK have to make 'big progress' ahead of deadline

For Ukraine’s female soldiers, armed conflict is not the only danger

When is Day of the Dead, what does it celebrate, and what's an ofrenda?