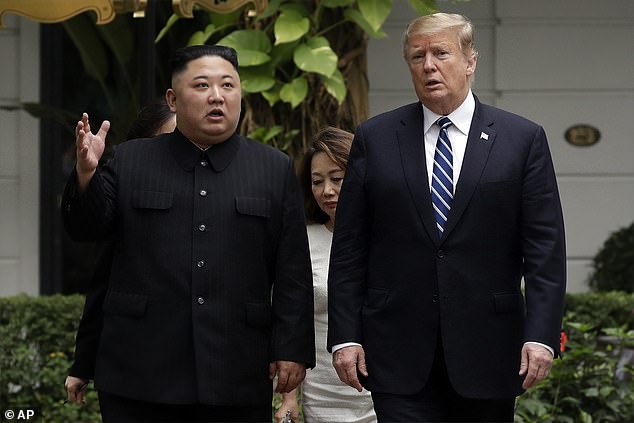 Former President Donald Trump invited North Korean dictator Kim Jong-un for a ride on Air Force One after the men met for a summit in Vietnam in 2019, insiders have revealed.

That offer and other details about Trump’s extraordinary relationship with Kim were brought to light in the third and final part of the BBC docu-series ‘Trump Takes On the World’, airing Wednesday.

The summit abruptly ended when the leaders failed to agree on what Kim would be willing to give up in exchange for sanctions relief, with Trump telling reporters: ‘Sometimes you just have to walk.’

But Trump apparently left things on more cordial terms that he let on in the press, the BBC docu-series revealed.

‘The president knew that Kim had arrived on a multi-day train ride through China into Hanoi and the president said: “I can get you home in two hours if you want.” Kim declined.’

President Donald Trump invited North Korean dictator Kim Jong-un for a ride on Air Force One after the men met for a summit in Vietnam, a BBC docu-series revealed. Trump and Kim are pictured together during the summit in Hanoi on February 28, 2019

Pottinger said the ‘gracious gesture’ astounded him and other officials who witnessed it, but it wasn’t the only puzzling exchange between Trump and Kim.

Former National Security Adviser John Bolton also appeared in the docu-series and spoke of the ‘bromance’ the leaders formed following their first meeting in Singapore in June 2018.

‘Trump thought he had a new best friend,’ Bolton said.

He described another troubling instance when Trump informed his team that he had agreed to Kim’s request to cancel joint military exercises between the US and South Korea.

‘Kim Jong-un, as he had many times in the past, complained about the big joint exercises between South Korea and American forces, which had been going on on the Korean peninsula for about 60 years plus,’ Bolton said.

‘Trump, out of nowhere, said: “I’m going to cancel the war games [as he called them]. There’s no need for them, they’re expensive and it will make you happy.”

‘I couldn’t believe it. [Secretary of State Mike] Pompeo, [Chief of Staff John] Kelly and I were sitting there in the room with Trump and we weren’t consulted.

‘It came simply from Trump’s own mind. It was an unforced error; it was a concession for which we got nothing in return.’

‘Trump thought he had a new best friend,’ Bolton said of Trump’s first meeting with Kim in Singapore in June 2018 (pictured)

The docu-series also offered new details about how Trump and Kim’s first meeting in 2018 was arranged. At the time, Trump’s willingness to sit down with Kim came as a surprise to many, after the president had threatened to unleash ‘fire and fury’ on North Korea while deriding Kim as ‘Rocket Man’.

Jeff Feltman, the United Nation’s Under-Secretary General for Political Affairs, revealed to BBC that he delivered a ‘secret message’ to Kim with Trump’s offer of a meeting.

Feltman explained that the North Korean government invited him to visit Pyongyang, and the US State Department initially didn’t think he should accept.

‘[Trump and Guterres] were comparing notes on what was happening, what might be possible, how dangerous was it, how likely would a military response be, all that sort of thing,’ Feltman said.

‘Secretary General Guterres said to President Trump: “Jeff Feltman has this strange invitation to go to Pyongyang and lead a policy dialogue with the North Koreans.”

Feltman then traveled to Pyongyang and relayed Trump’s offer to North Korea’s foreign minister, he said.

‘There was a bit of silence before the foreign minister said: “I don’t believe you, why should I believe you,'” he recalled.

‘And I said: “Look, I’m not asking you to believe me. What I’m telling you is that the UN was entrusted with a message from President Trump; I am the carrier of that message.”‘

Feltman added: ‘I went to Pyongyang deeply, deeply concerned given this feeling that war was imminent. I left Pyongyang terrified that what we really risked was an accidental war.’

Several months passed without a response from Kim, before the dictator informed South Korea that he wanted to meet with Trump.

Trump’s national security adviser at the time, HR McMaster, said he was shocked when his South Korean counterpart, Chung Eui-yong, presented the news at the White House.

‘Ambassador Chung just about fell out of his chair because he thought it was going to be kind of a hard sell,’ McMaster told BBC.

McMaster said he expressed ‘serious reservations’ about the meeting, but Trump went ahead and accepted anyway.

‘I felt that it would be better to let Kim Jong-un feel the pressure a little bit longer,’ he said. ‘But, of course the president wouldn’t resist the opportunity.’

Egyptian Youth Minister: The crisis of the Zamalek plane bound for Senegal has ended