Donald Trump was playing golf on Thursday at his Florida course as he readies for his return to the political fray with an eagerly-awaited speech at CPAC on Sunday.

As he took to the greens, in New York City prosecutors were beginning to comb through millions of pages of Trump’s tax returns.

Danny Frost, spokesman for the Manhattan district attorney, Cyrus Vance Jr, confirmed on Thursday that the tax returns had been received.

On Monday, the Supreme Court ruled that Trump’s accounting firm hand over the documents, which Vance has hoped for the past year and a half to obtain.

The former president has spent much of his time since leaving Washington on January 20 on the fairways. 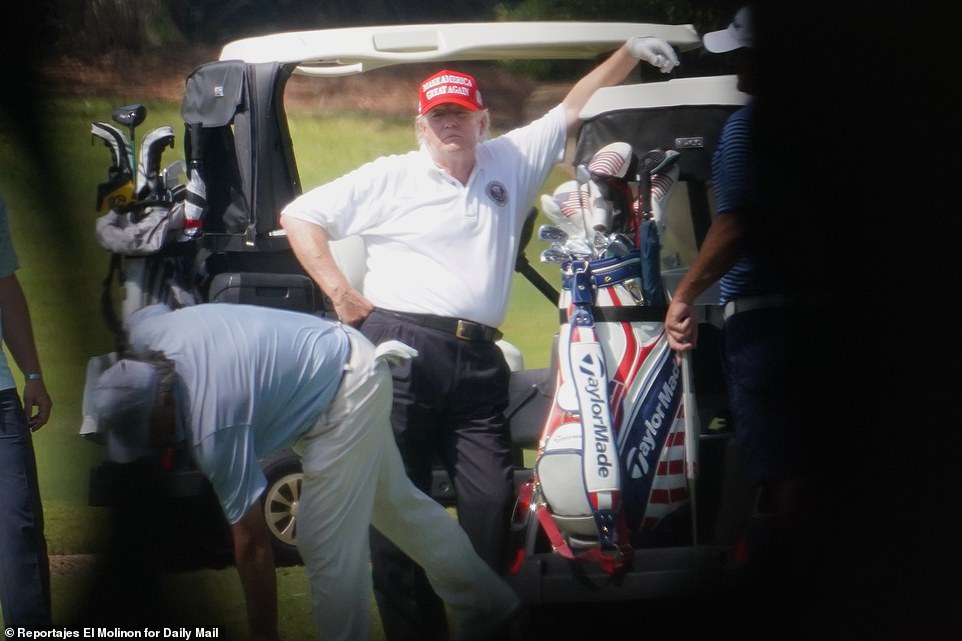 Donald Trump on Thursday was seen playing golf at his West Palm Beach course, ahead of CPAC 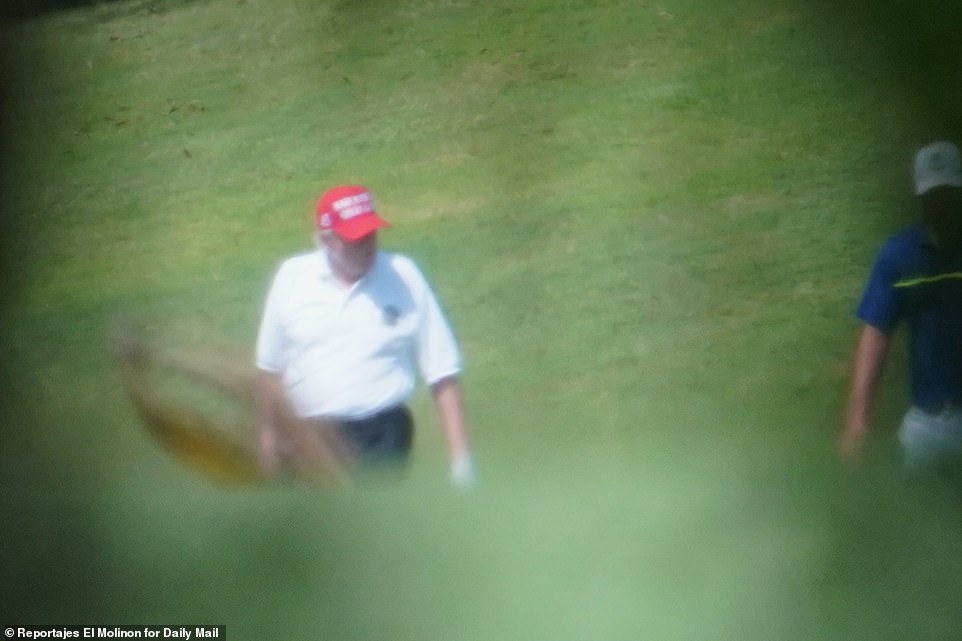 Trump, who played more than 300 rounds of golf as president, has spent much of his time since leaving DC on the greens 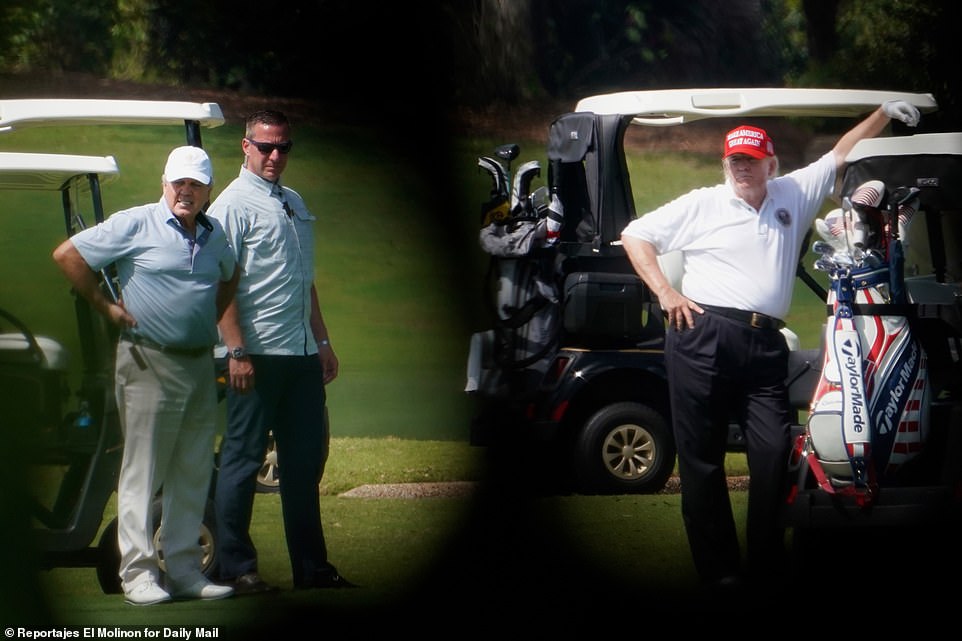 Trump on Thursday played with a friend in a white baseball cap. On Sunday Trump will return to the political fray

Having played 300 rounds during his single term as president – his predecessor Barack Obama played 333 rounds in eight years – Trump has been a frequent sight on the Florida course after stepping down.

On Thursday he was spotted with a Secret Service bodyguard and an unnamed golfing partner.

The flag at his home, Mar-a-Lago, was flying at half mast on Thursday in memory of Rush Limbaugh, a Florida resident who died on February 17.

And down the road in Orlando, the annual Conservative Political Action Conference, known as CPAC, was beginning.

The former president will headline the event with a Sunday afternoon keynote address. 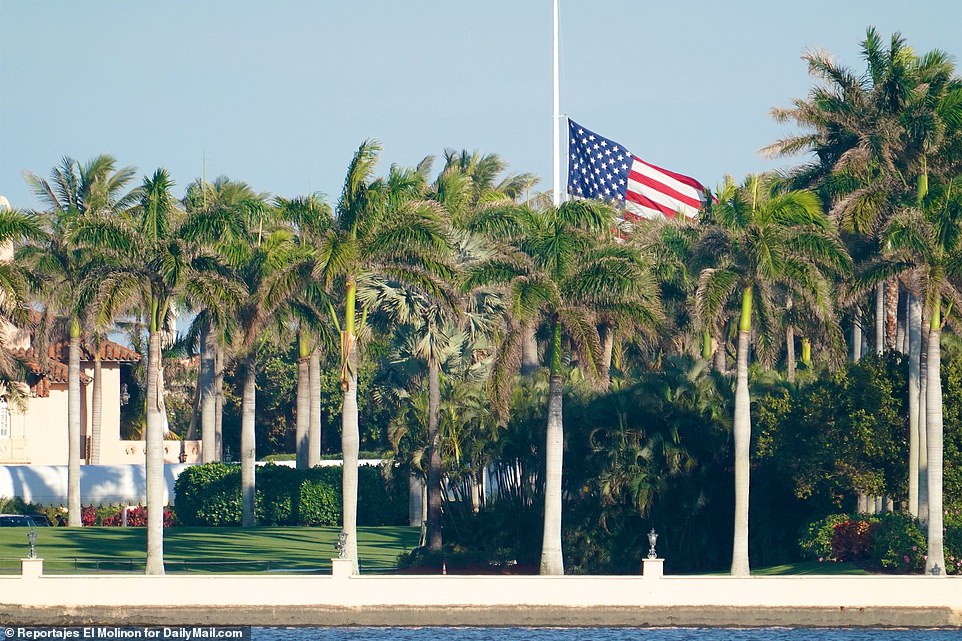 The flag at Mar-a-Lago was flying at half-staff on Thursday in memory of local resident Rush Limbaugh, who died February 17 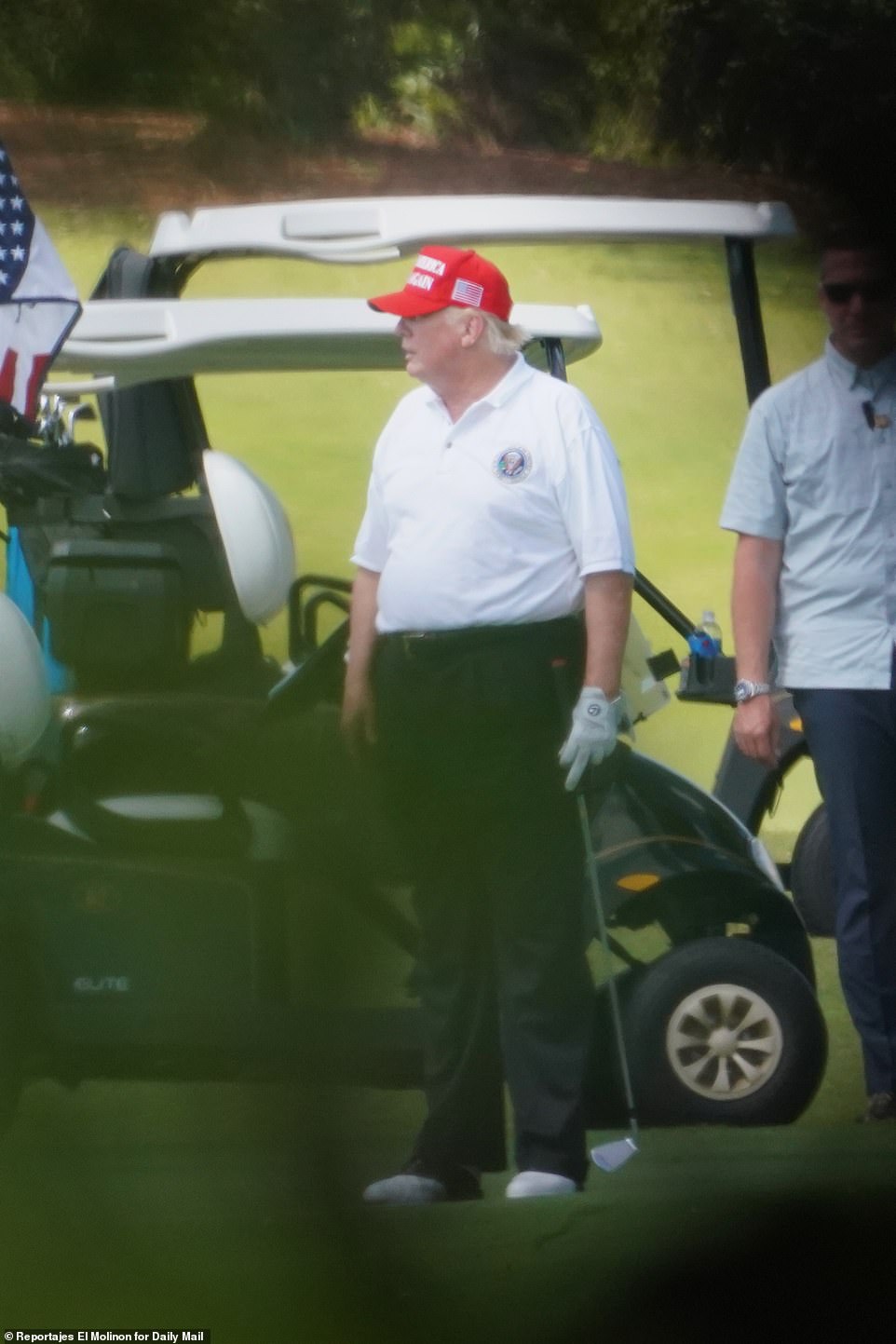 With the theme for this year given as ‘America Uncanceled’, Trump – who was removed from social media after the January 6 riots – will deliver his comeback speech.

He is expected to draw distinctions with President Joe Biden, particularly when it comes to immigration.

Biden has come under sharp criticism in recent days for his decision to reopen shelters for migrant children, with critics pointing out that Trump was excoriated for keeping young migrants in cages at the same centers.

Trump will likely accuse Biden of encouraging a rush to the border with what the White House presents as a more humane immigration policy.

He is also expected to speak about the future of the Republican Party.

Axios reported that he hopes to present himself as the ‘presumptive 2024 nominee.’

The list of speakers announced so far certainly suggests that Trump is winning the war for the heart of the party.

Donald Trump Jr and his girlfriend, Kimberly Guilfoyle, will address the gathering, as will Trump’s allies including Ted Cruz, Josh Hawley, Mike Pompeo and Rick Scott. 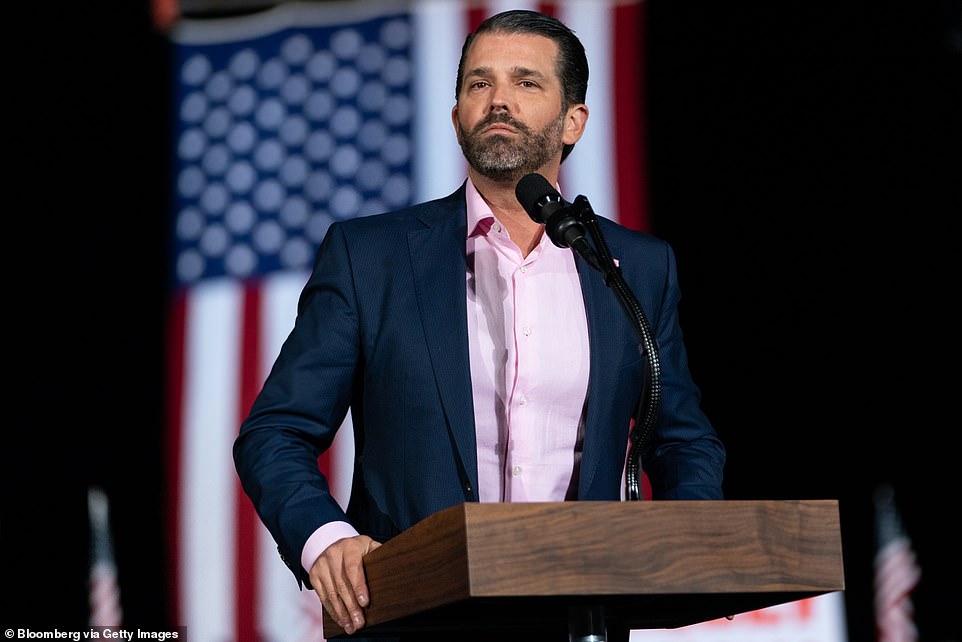 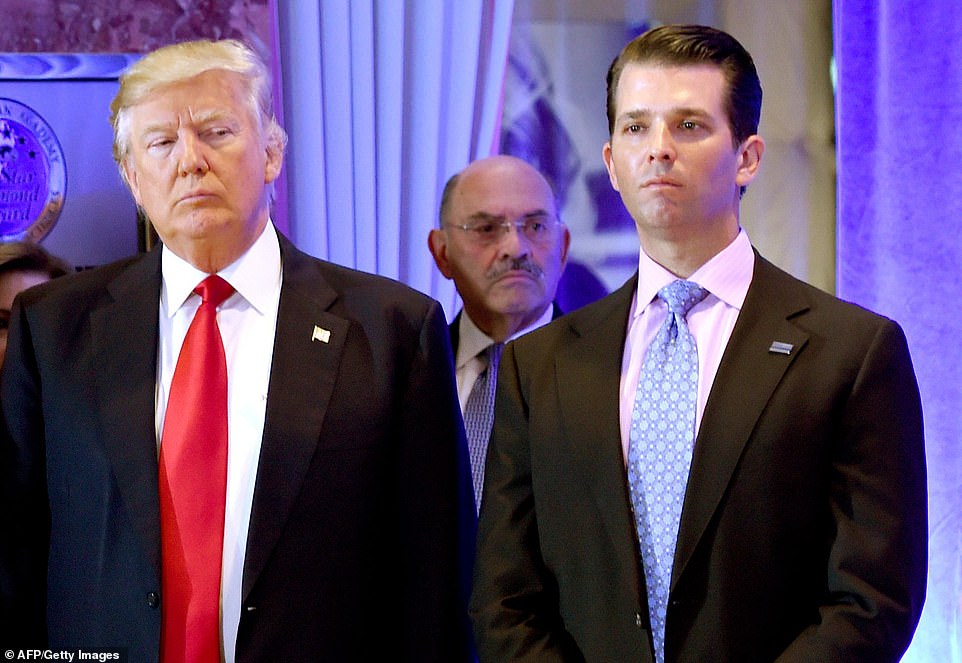 Donald Trump is pictured with his son. The pair are taking center stage at the Orlando gathering

Mitch McConnell, the leader of the Republican Party, who accused Trump of a ‘disgraceful dereliction of duty’ after the January 6 insurrection, has not been invited, and nor have Senator Mitt Romney and Representative Liz Cheney – both of whom voted to impeach him.

Cheney said on Wednesday: ‘I don’t believe that he should be playing a role in the future of the party or the country.’

McConnell, however, said on Thursday night he would ‘absolutely’ back Trump in the 2024 presidential race if he was the nominee of the Republican Party .

Trump referred to McConnell earlier this month as an ‘dour, sullen, and unsmiling political hack’.

‘There’s no incumbent,’ McConnell said. ‘Should be a wide-open race and fun for you all to cover.’

Mike Pence, who Trump accused of failing him by refusing to overthrow the election, has declined an invitation to speak.

Nikki Haley, Trump’s former UN ambassador, was also invited and declined, citing a scheduling conflict. She spoke out against Trump in a lengthy Politico piece earlier this month, then tried to make amends by visiting to Mar-a-Lago, but Trump refused to see her.

Trump, in addition to defining the list of invited speakers, has also set the tone for debate.

On Friday morning, panelists including Representative Mo Brooks of Alabama, who enthusiastically backed Trump’s claims of election fraud, will lead a panel on ‘Protecting Elections: Why Judges & Media Refused to Look at the Evidence.’

On Sunday morning, ahead of Trump’s speech, speakers will discuss what they call the ‘Failed States’ of Pennsylvania, Georgia and Nevada – states won by Biden, where Trump failed to get the result overturned.

Anticipation of the speech came as Vance’s team in Manhattan began examining Trump’s tax records, ahead of a criminal grand jury investigation into his business dealings. 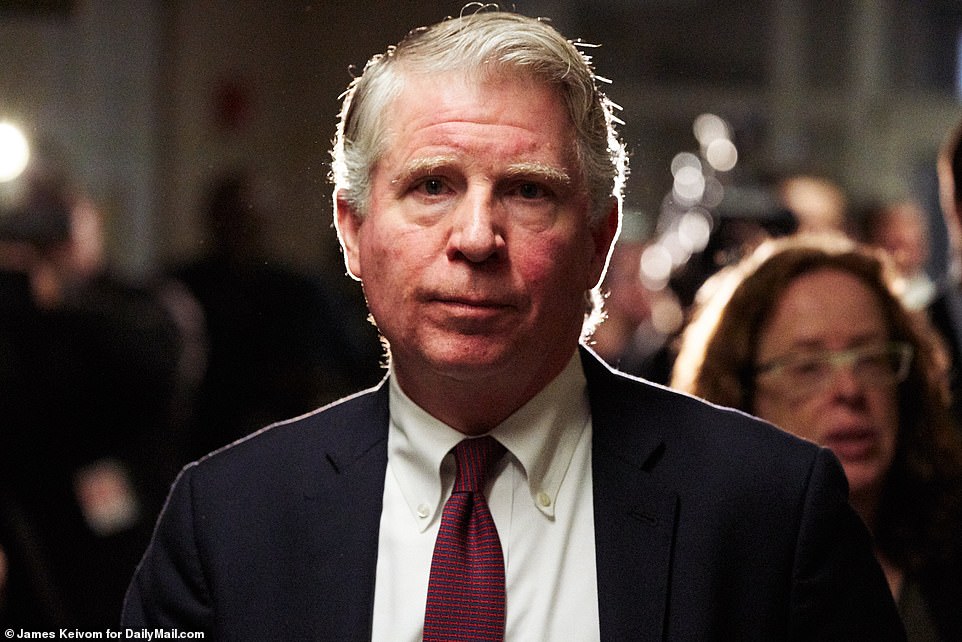 The documents are protected by grand jury secrecy rules and are not expected to be made public.

Vance, a Democrat, is conducting a wide-ranging investigation that includes an examination of whether Trump or his businesses lied about the value of assets to gain favorable loan terms and tax benefits.

Trump’s lawyers immediately went to court to block its enforcement, first arguing that he was immune from being investigated while president.

When the Supreme Court rejected that argument 7-2 last July, Trump’s lawyers returned to a lower court and argued the subpoena was issued in bad faith, overly broad, might have been politically motivated and amounted to harassment.

An appellate court rejected that argument and the Supreme Court on Monday declined to intervene.

In a three-word statement after the Supreme Court ruled on Monday, Vance said only: ‘The work continues.’

Trump has called Vance’s investigation ‘a fishing expedition’ and ‘a continuation of the witch hunt — the greatest witch hunt in history.’

Vance’s subpoena sought from Mazars USA not only the final versions of Trump’s tax returns, but also draft versions of those returns and ‘any and all statements of financial condition, annual statements, periodic financial reports, and independent auditors’ reports’ held by the company.

Mazars did not object to the subpoena and, in a statement at the time, said it would ‘respect the legal process and fully comply with its legal obligations.’

The Mazars subpoena also sought engagement agreements that define the accountants’ role in creating the tax returns and financial statements; source documents providing the accountants with raw financial data; and work papers and communications between the firm and Trump representatives.

Those would include communications showing how the raw data was analyzed and treated in the preparation of the records.

The New York Times separately obtained years of Trump’s tax data and published stories last year detailing some of his finances, including that he paid just $750 in federal income tax in 2017 and no income tax in 11 of 18 years because of major losses.

Muhammad Ali Al-Houthi sends a message to the Emirates