President Donald Trump has highlighted declining new coronavirus cases and hospitalizations in former hotspots Florida, Texas and Arizona, asserting that the pandemic ‘will disappear’ – even as deaths topped 2,000 in 24 hours for the first time since May.

Trump said at a press conference on Friday night at his golf club in New Jersey that the pandemic ‘is disappearing,’ adding, ‘It will disappear.

‘In the US, more than 80 percent of jurisdictions report declining cases. We’re doing very well, you don’t hear that often in the media,’ he continued.

It was unclear how Trump was defining ‘jurisdictions,’ but coronavirus deaths are still rising in 23 states, while cases are increasing in 20 states, according to a Reuters analysis comparing data from the past two weeks to the previous two.

‘We have a very large country, a very complex country. More than half of America’s counties report fewer than 20 cases last week,’ Trump said. ‘We’re doing very well but we have to remain vigilant.’ 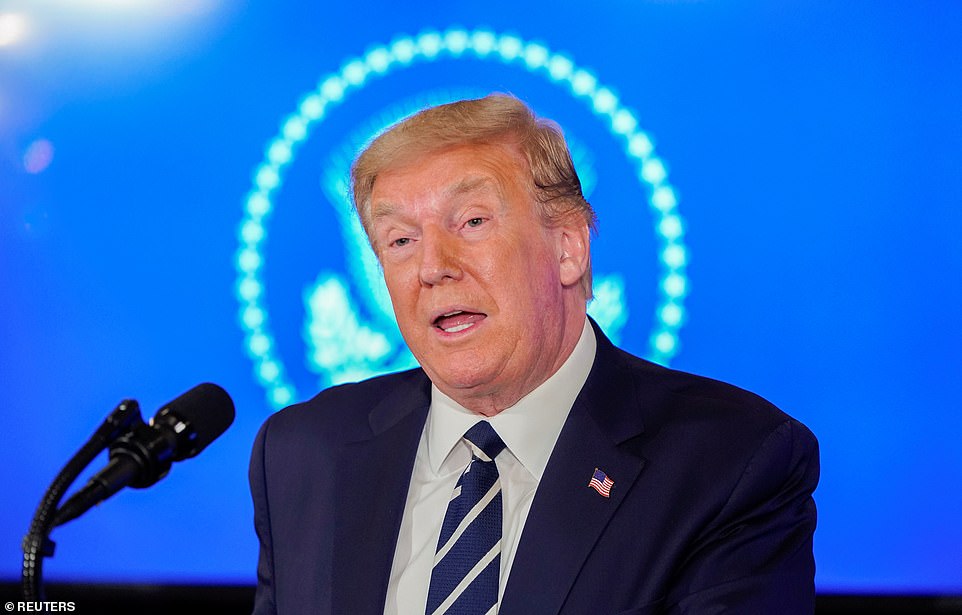 ‘The southern states that were a very strong hotspot not long ago — Arizona, Texas, and Florida continue to show significant improvement, including increased availability of hospital beds,’ Trump said. Indeed, all three states have shown declining new cases and hospitalizations for the past several weeks.

‘Arizona now has the smallest number of coronavirus inpatients since mid-June,’ Trump continued. ‘Texas is stabilizing and improving rapidly.’

‘Florida is also stabilizing, its statewide positive test rate continues to decrease, from 13 percent on July 23 to 8 percent this week. Florida has done very well,’ Trump said. ‘Even Miami, which was the hottest spot in Florida, is heading down very rapidly.’

Trump said his administration is ‘carefully monitoring California’s Central Valley, as well as San Diego, Los Angeles, Sacramento and San Francisco, which are starting to stabilize and go down.’

He said that several regions where cases are on the rise, including Boston, Chicago and the Midwest, are being carefully monitored.

‘ It’s vital that all Americans work together to protect the most vulnerable,’ Trump said. ‘Approximately half of all deaths have occurred in nursing homes and long term care facilities.’

It came as Dr Anthony Fauci warned there is ‘trouble ahead’ for some cities if they don’t act now to stop the spread.

Deaths in the US exceeded the grim 160,000 mark on Friday, which is nearly a quarter of the global COVID-19 death toll. The number of positive cases across the US is now at nearly 4.9 million.

The US added 2,060 deaths in 24 hours as of 8.30pm on Thursday, AFP reported, citing the Johns Hopkins University live tally. The last time the US recorded more than 2,000 deaths in a 24-hour period was on May 7.

Deaths have increased by 10,000 in just nine days. On a per-capita basis, the US now ranks 10th highest in the world for both cases and deaths.

Coronavirus deaths are still rising in 23 states, while cases are increasing in 20 states, according to a Reuters analysis comparing data from the past two weeks to the previous two.

Many of the new deaths have come from the hotspot states of California, Florida and Texas, which are also the top three states for total cases.

While infections appear to be declining in those states, new outbreaks are emerging coast-to-coast.

White House coronavirus task force coordinator, Dr Deborah Birx, warned this week that the cities of Boston, Chicago, Detroit and Washington could face outbreaks due to an uptick in the percentage of coronavirus tests coming back positive. 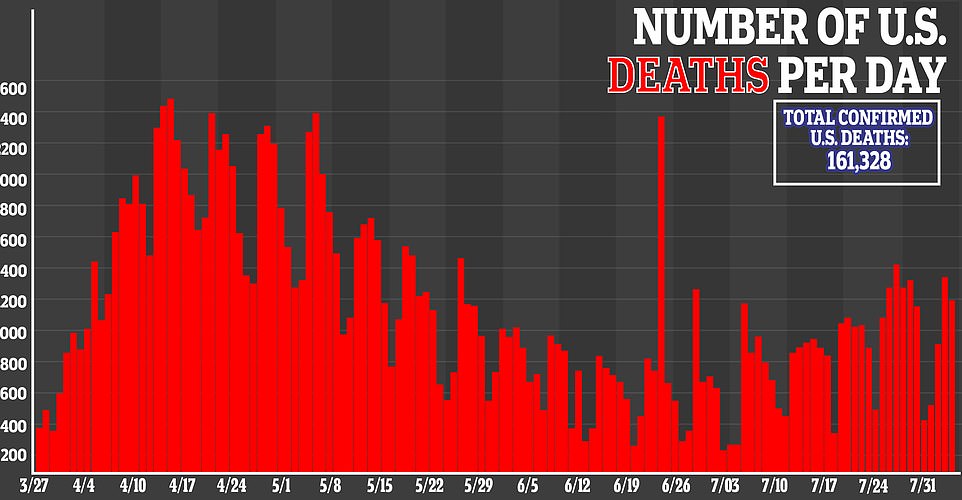 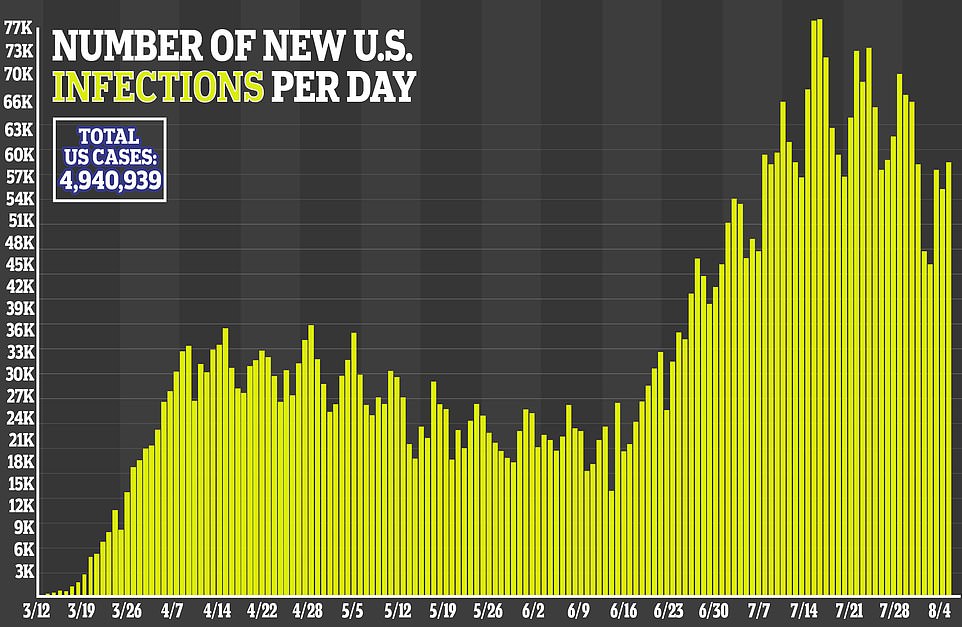 Following her warning, fellow task force member Dr Anthony Fauci said on Thursday: ‘This is a predictor of trouble ahead.’

Fauci was asked on CNN about Birx’s comments identifying new areas of concern in major cities, even as authorities see encouraging signs across the South.

Even in cities and states where most people are doing things right, Fauci said, a segment of people not wearing masks or following social distancing remains vulnerable to infection and can keep the virus smoldering in US communities.

‘Unless everybody pulls together, and gets the level way down over baseline, we’re going to continue to see these kind of increases that Dr Birx was talking about in several of those cities,’ Fauci said.

Public health experts have in recent days sent regular warnings to cities and states not to relax anti-coronavirus measures too much before the virus is under sufficient control.

President Donald Trump, in contrast, has played down the staying power of the virus, saying on Wednesday ‘it will go away like things go away’ as he urged US schools to reopen on time for face-to-face lessons.

Fauci has also said children should be sent back to class as soon as possible.

It comes as a new forecast predicted the US death toll would almost double by the end of the year but 70,000 lives could be saved if everyone wears a mask.

The University of Washington’s Institute for Health Metrics revised its death toll forecast on Thursday to predict nearly 300,000 deaths by December 1.

Researchers say that 70,000 lives could be saved if 95 percent of Americans wear masks from today when they leave their homes.

IHME Director Dr Christopher Murray acknowledged there appears to be fewer transmissions of the virus in the hotspot states of Arizona, California, Florida and Texas but said deaths are rising and will continue to rise for the next week or two.

CHICAGO: In Chicago, there are an average of 294 new cases and two deaths every day. As of Thursday, there were 62,797 cases of COVID-19 and 2,798 deaths among Chicago residents 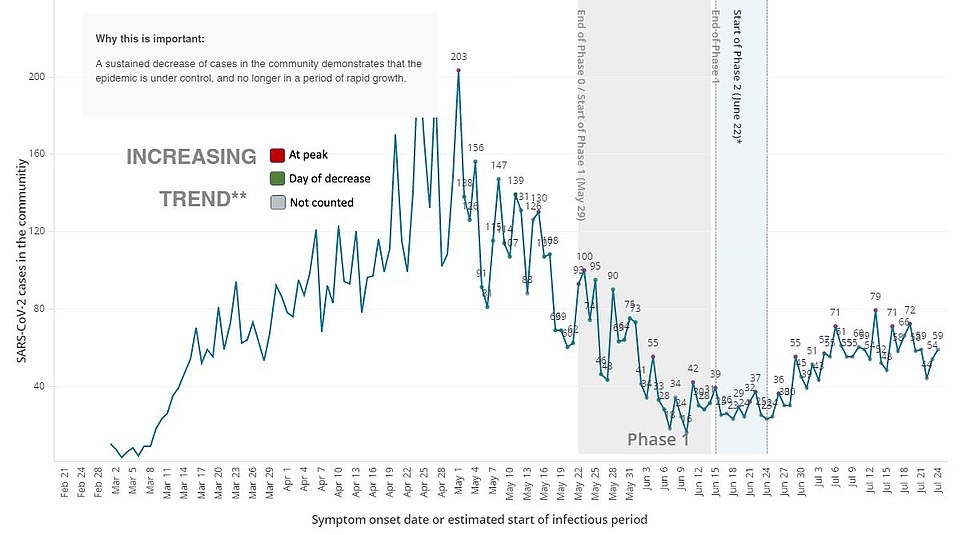 WASHINGTON: The total number of positive cases in Washington DC is now at 12,589 and deaths are at 589

BOSTON: In Boston, the number of infections has now reached 14,323 and the death toll is at 735

He put the drop in infections down to a combination of local mandates for mask use, bar and restaurant closures and more responsible behavior by the public.

‘The public’s behavior had a direct correlation to the transmission of the virus and, in turn, the numbers of deaths,’ Murray said.

‘Such efforts to act more cautiously and responsibly will be an important aspect of COVID-19 forecasting and the up-and-down patterns in individual states throughout the coming months and into next year.

‘We’re seeing a rollercoaster in the United States.

‘It appears that people are wearing masks and socially distancing more frequently as infections increase, then after a while as infections drop, people let their guard down and stop taking these measures to protect themselves and others – which, of course, leads to more infections. And the potentially deadly cycle starts over again.’

Murray said that based on cases, hospitalizations and deaths, several states are seeing increases in the transmission of COVID-19, including Colorado, Idaho, Kansas, Kentucky, Mississippi, Missouri, Ohio, Oklahoma, Oregon, and Virginia.

‘These states may experience increasing cases for several weeks and then may see a response toward more responsible behavior,’ Murray said.

The University of Washington’s Institute for Health Metrics revised its death toll forecast on Thursday to predict nearly 300,000 deaths by December 1. Researchers say that 70,000 lives could be saved if 95 percent of Americans wear masks from today when they leave their homes

Jessica Shuran Yu: Figure skater says others in sport 'want to speak out' about abuse

Birmingham knifeman ‘confronted man about a girl’ before stabbing spree

UK can be ‘Saudi Arabia of wind power’ – PM

Nostalgia is a hell of a drug. And like all drugs, it can be dangerous to...