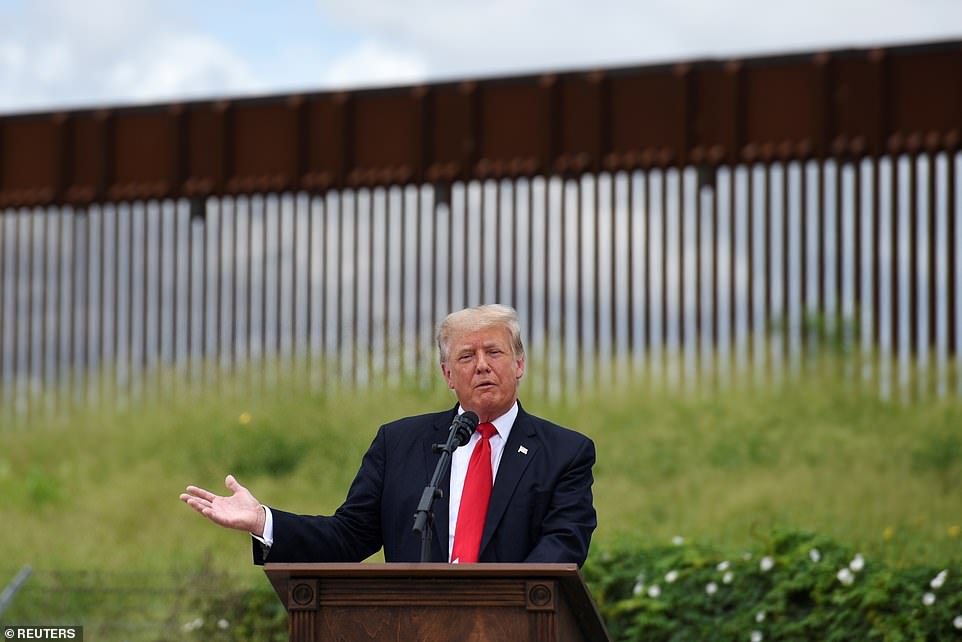 Former President Donald Trump said the migrant surge into the US is ‘more dangerous than ever’ during a trip to the border and slammed President Biden for not finishing his wall and turning the situation at the Rio Grande into a ‘disgrace’.

‘All Biden had to do was go to the beach,’ he said, claiming that if the president did nothing regarding immigration policies put in place by the Trump administration, the border crisis would not have sparked.

Trump also went on a tirade urging Biden to paint completed portions of the border wall, claiming that since construction and funding stopped, the wall has been left to rust.

‘They have to get a paint job on the wall,’ Trump lamented. ‘And the best color to paint it is black.’

Trump said the entire southern border wall would have been completed within two months if he was reelected and ‘not sitting there and rusting.’

He arrived in a partly cloudy McAllen, Texas on Wednesday to survey part of his border wall upon the invitation of Texas Governor Greg Abbott, a fellow Republican. Throughout his day in Texas, Trump was met with a few sputtering of summer showers.

The former president spoke alongside Abbott with the backdrop of a part of the border wall that ends, creating a large gap before the next part starts up again.

‘We had it down to a science,’ Trump said of his administration’s immigration policies, boasting ‘there has never been a border so secure.’

‘It’s a disgrace,’ he added, of the influx of border crossers under Biden.

Trump addressed about 100 members of the media and another few hundred in an exclusive crowd that made up law enforcement officers, Texas lawmakers, Trump insiders and members of the U.S. Congress who traveled down to the border for the former president’s trip.

Lawmakers attending included freshman Representatives Madison Cawthorn, the youngest member of Congress and close Trump ally, and Lauren Boebert, who is staunchly pro-Second Amendment and has quickly become a voice on the right against illegal immigration.

Before Trump arrived in McAllen for his mini rally, Cawthorn lit up a cigar and Boebert approached the media risers where she yelled: ‘I have a question for the press, do you miss President Trump?’, which was met with silence.

In a briefing in nearby Weslaco ahead of visiting a portion of the wall, the former president took the opportunity to rail against voter fraud, lash out at the media, blame Biden for the massive influx of illegal migration and praise his own immigration policies.

‘We have a sick country in many ways. It’s sick in elections and it’s sick in the border,’ Trump said.

Trump gave kudos to Abbott and other Texas officials gathered for the briefing for helping secure the southern border.

He also gave a shout-out to his former White House doctor, Ronny Jackson, who now represents Texas in Congress.

‘And there’s my doctor right over there, my doctor,’ Trump said. ‘He said, ‘You know sir, if you want, you’re really smart, you ought to take the cognitive test,” Trump recalled. ‘But he did a test. Did I ace it? I aced it,’ the ex-president continued, adding ‘I’d like to see Biden’ take it.

Trump added that the first few questions are identifying animals.

‘He’s gonna have a little hard time,’ Trump said of Biden. ‘I think he’s going to have a hard time with the first few, actually.’

Trump said if Biden wanted to continue his successes with border security, he shouldn’t have stopped construction, which included plans to paint the wall.

‘You could have completed the wall in a couple of months,’ Trump said in the briefing.

‘They were supposed to paint the wall and they didn’t even do that,’ he said of the Biden administration.

Reports during Trump’s presidency revealed he would micromanage how he wanted the border wall to look, down to the small details of color and materials.

Prior to the trip, Trump also praised his southern border in an op-ed, where he blamed Joe Biden for the near 700 per cent rise in illegal immigration from last year.

‘This is perhaps the first time in world history a nation has purposely and systematically dismantled its own defenses to invite millions of foreign migrants to enter its territory and break its laws,’ the former president wrote in a Washington Times op/ed.

Wednesday’s trip was Trump’s first to his border wall since leaving office.

It also comes five days after Vice President Kamala Harris visited El Paso, Texas after months of criticism for not visiting the border since Biden in March put her in charge of addressing ‘root causes’ of mass migration.

Republicans were enraged when Harris decided to visit El Paso, instead of the heart of the migration crisis 800 miles away in the Rio Grande Valley, where there are around 230 per cent more illegal crossings.

The former president visited McAllen, Texas, which is where a massive amount of crossings occur in the Rio Grande Valley. His location is 800 miles from where Vice President Kamala Harris went in El Paso on Friday

Upon arriving at the border for Trump’s remarks, Representative Madison Cawthorn lit up a cigar

In May 2020, Customs and Border Protection reported 23,237 total encounters at the border with illegal crossers. Just one year later, and four months after Biden took office, CBP reported a record-breaking 180,034 encounters.

The number of migrants crossing into the U.S. has grown exponentially each month since Biden has become president and with the lack of Trump’s ‘zero tolerance’ border policies and immigration hawks cracking down on illegal entry.

Ahead of surveying part of the wall, Trump will hold a briefing with Abbott at the Department of Public Safety in Weslaco, a small town just east of McAllen and Donna.

Trump claims that the migration crisis is man-made by the Biden administration.

‘When I was president, I delivered on my promise to build a border wall to protect our country. All Joe Biden had to do was paint it,’ Trump wrote in his op/ed on Wednesday.

He added: ‘To say that Biden has provoked a national security disaster does not even begin to do justice to the calamity.’

Immediately when Biden entered office he signed an executive order on Day One halting construction of the southern border wall.

The move was questioned by border wall hawks who claim a president cannot stop already-appropriated congressional funds from going toward their intended purpose. In this case, Defense Department money was being directed toward the building and bolstering of Trump’s promised wall between the U.S. and Mexico.

Trump announced his visit to the border eight days before Harris finally revealed she would take a trip south.

From May 2020 to May 2021, there was a near 700 per cent increase in the number of border encounters by Border agents with migrants

The Democratic National Committee blamed Trump for the prevailing crisis and called his visit ‘political theatre’ and a ‘clown show’.

‘Donald Trump and Republicans are bringing their clown show on the road in a desperate attempt to try to spin their cruel border policies to mislead voters,’ DNC Rapid Response Director Ammar Moussa released in a statement.

Governor Abbott has become a vocal critic of Biden and Harris’ dealing with the southern border crisis and he did not meet with the vice president during her border trip last week.

In letters back and forth with Biden’s Department of Health and Human Services, Abbott has detailed a plan to shut down migrant holding facilities in Texas if they do not stop catering to unaccompanied minors.

He claims Biden is relying on Texas to do the work of the federal government.

‘The federal government must solve the federal problem caused by the Biden administration’s disastrous open-border policies,’ Abbott wrote in a June letter to HHS, obtained by Politico.

‘Texas will not be commandeered into federal government service,’ he continued.

Abbott’s plan would strip shelters of their license, which are needed to remain open, if they continue to serve migrant kids beginning August 31, which could upend accommodations for nearly 4,500 unaccompanied minor border crossers.

Federal health officials are threatening to sue Abbott if he goes forward with the plan.