Donald Trump took off his mask and told the crowd of hundreds of fans ‘I’m feeling great’ in his first public event at the White House since his COVID diagnosis.

The Trump campaign announced the president will hold two more rallies in Pennsylvania and Iowa next week as supporters descended on the White House in their droves Saturday to see the president hold his first event since being diagnosed with COVID-19.

Hundreds of people sporting MAGA caps and waving American flags flocked to Washington DC late Saturday morning ahead of the event on the White House South Lawn kicking off at 2 p.m.

This marks the first major event at the White House since the ‘superspreader’ event in the Rose Garden on September 26 where Trump unveiled Amy Coney Barrett as his Supreme Court pick and at least nine attendees later tested positive for the virus.

Trump vowed to get back to business as usual after being hospitalized last week for COVID-19, in defiance of social distancing and quarantine rules. 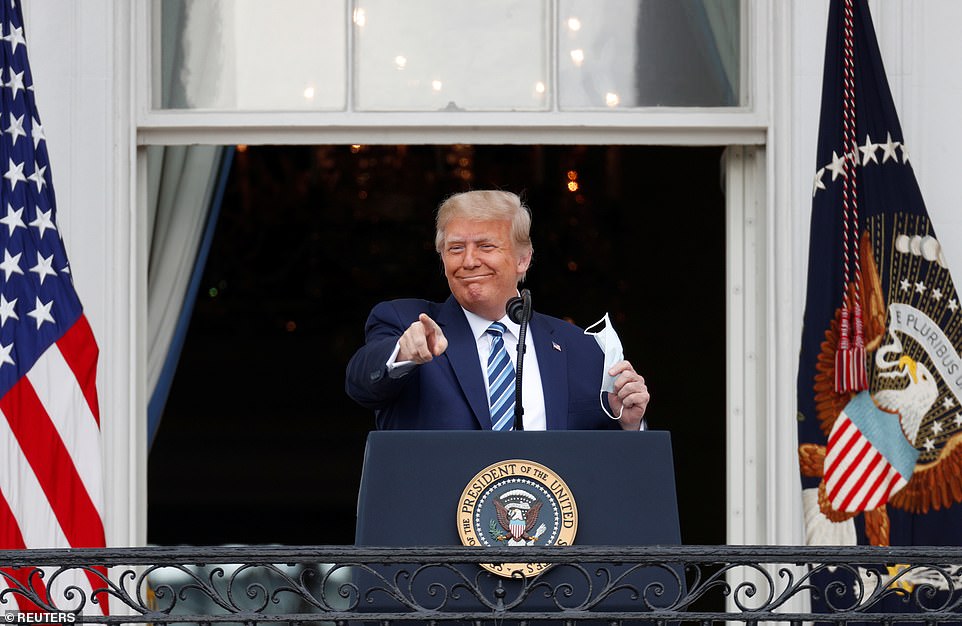 The president tested positive for the deadly virus last Thursday.

Medical experts think viral shedding continues for about 10 days after symptoms start in mild to moderate cases, according to the Centers for Disease Control and Prevention.

Infected individuals are also told to quarantine for 14 days after testing positive.

Saturday marks only day nine since Trump was diagnosed with the virus.

Trump walked out onto the White House balcony to the crowd of around 400 people Saturday as the Marine Band played ‘Hail to the Chief’.

He was sporting a face mask that he quickly removed as the crowd cheered and chanted ‘USA! USA!’

He insisted he was ‘feeling great’: ‘I’m feeling great… We’re starting very big with our rallies… because we cannot allow our country to become a socialist country.’

Trump said the vaccine would be ‘out very soon’ and he would ‘eradicate the China virus very soon’ as he addressed crowds on the South Lawn Saturday.

He branded his event a ‘peaceful protest’ at his first event since contracting COVID-19 where he addressed supporters from his balcony.

Trump immediately laid into his Democratic rival Joe Biden calling him ‘sleepy Joe’ and saying he ‘couldn’t even say the words law enforcement the other day’ as supporters chanted ‘four more years’. 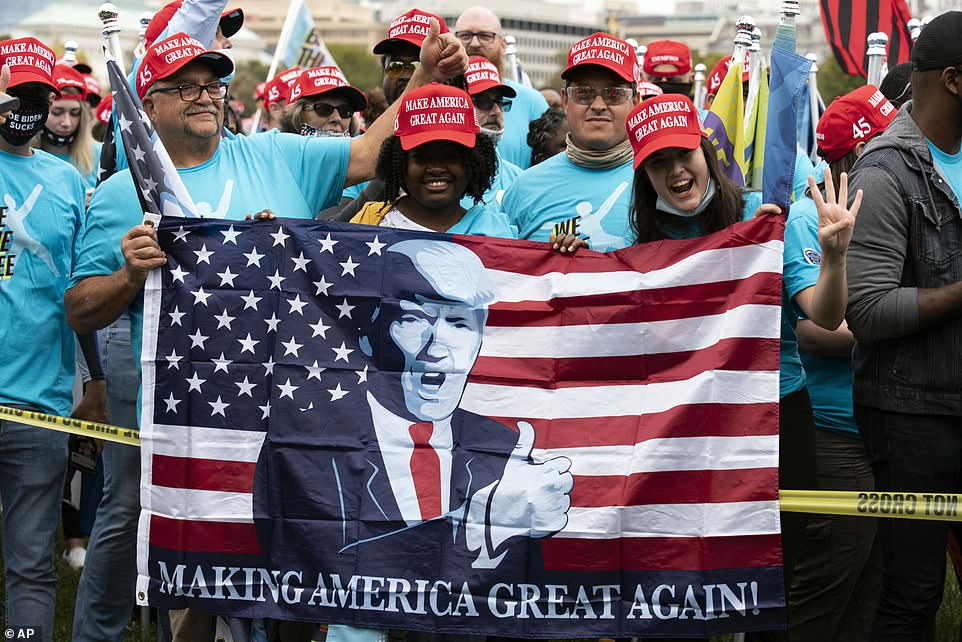 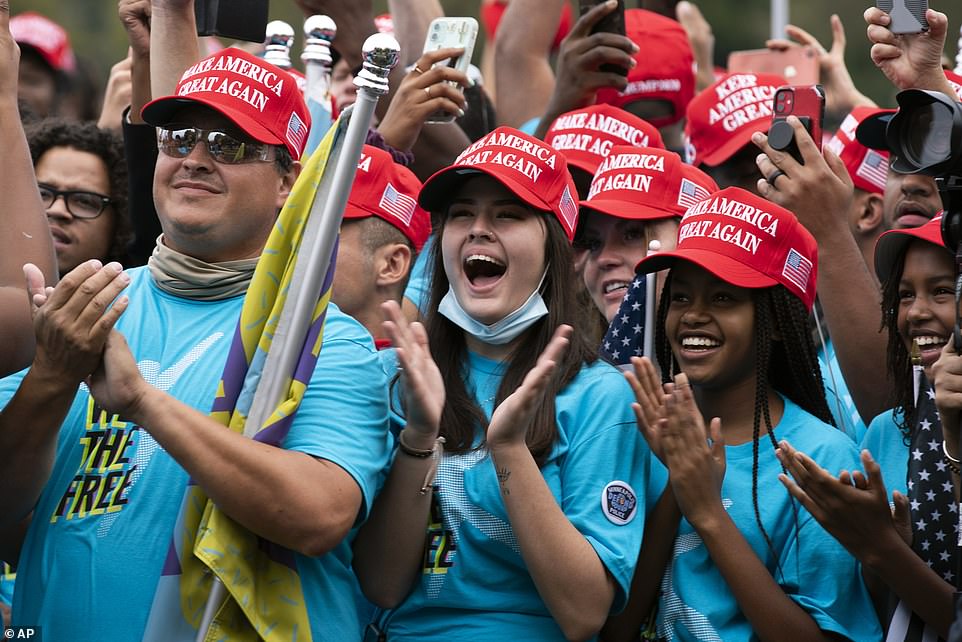 Supporters of President Donald Trump rally at The Ellipse, before entering to The White House 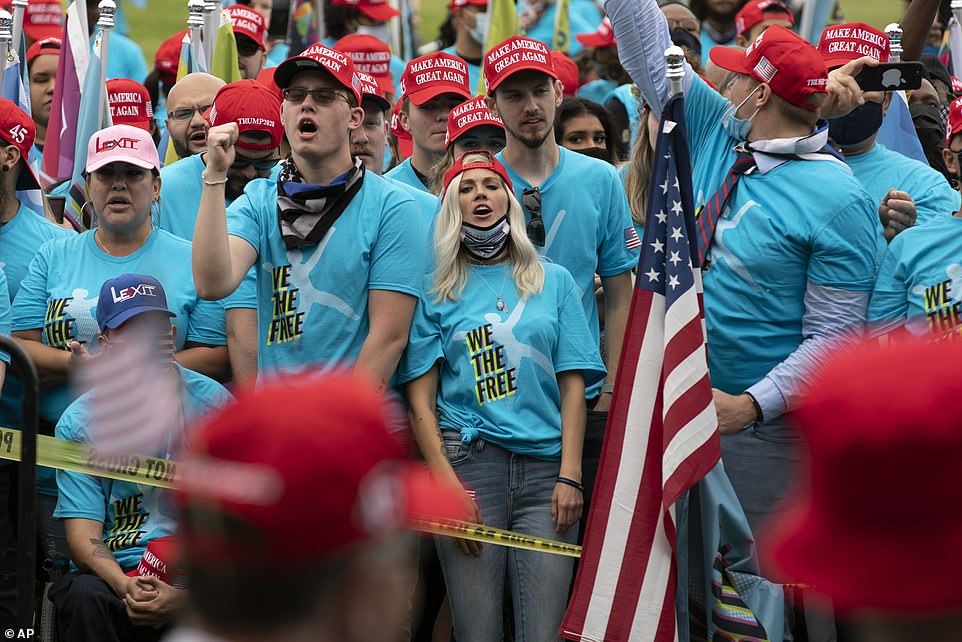 Hundreds of people had arrived for the rally around an hour before the event’s start, with many dressed in blue shirts from the Blexit DC Back the Blue event already on the South Lawn

Hundreds of people arrived for a rally at The Ellipse before Trump’s event early afternoon where he is expected to focus on law and order.

Many supporters were dressed in blue shirts for the Blexit DC Back the Blue event, where they were packed in close together flouting social distancing and not wearing masks.

Many then headed to The White House for Trump’s first public event since he vowed to get back on the campaign trail on his release from hospital.

More than 2,000 invitations were sent out to Trump supporters requesting their attendance at the South Lawn event, fueling concerns over yet another coronavirus outbreak originating at the seat of the US government.

Officials told reporters the rally is an ‘official event’ not a campaign event and no campaign staff are involved.

The White House said precautions have been put in place to limit the risk of an outbreak and members of the press were tested for coronavirus on entry at the White House.

No campaign signs and banners will be distributed to supporters by officials in order to limit contact. 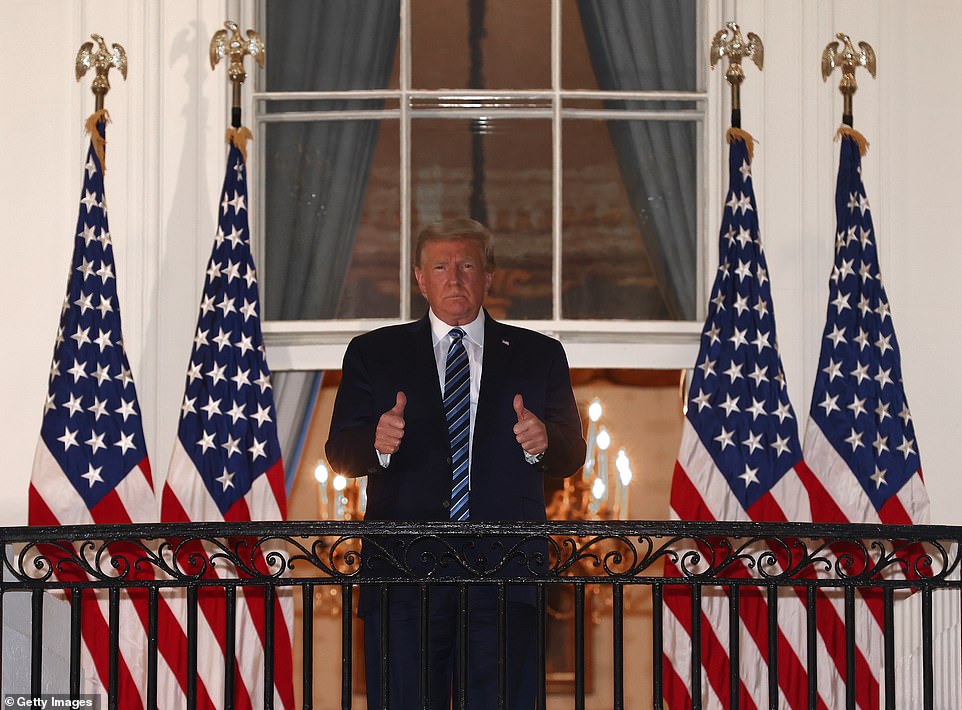 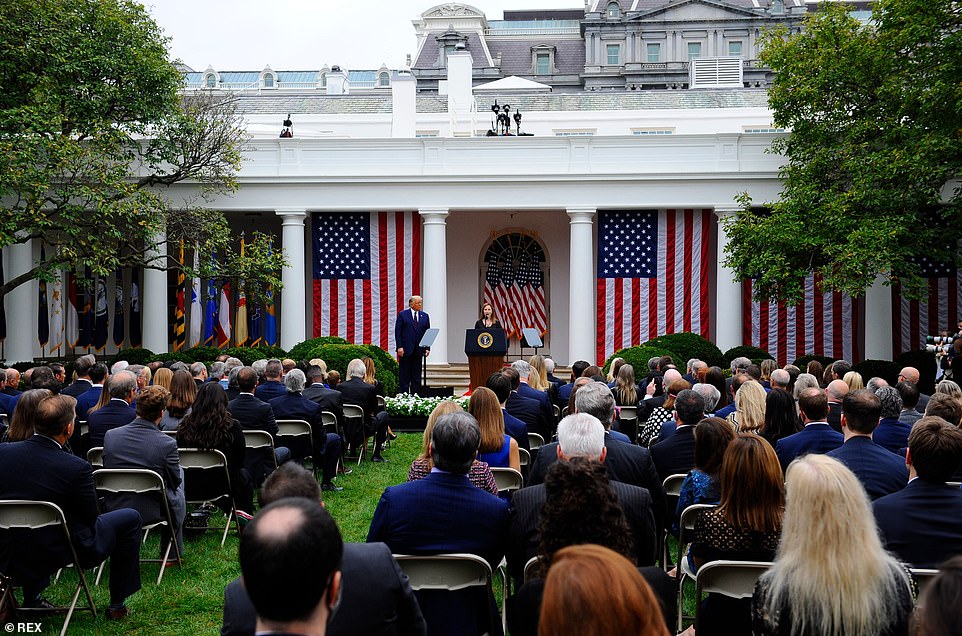 Attendees were told they would be given temperature checks on arrival, masks which they are instructed to wear, and access to hand sanitizer.

However it is unclear if masks and social distancing will be enforced.

It is also unclear if Trump is still contagious for the virus because the White House has refused to say when he last tested negative.

The South Lawn event has been described as a ‘peaceful protest for law and order’ and the president is expected to thank the American public for their support during his battle with the virus.

He is then expected to argue that Americans must support law enforcement and that not doing so causes more damage to black communities nationwide. 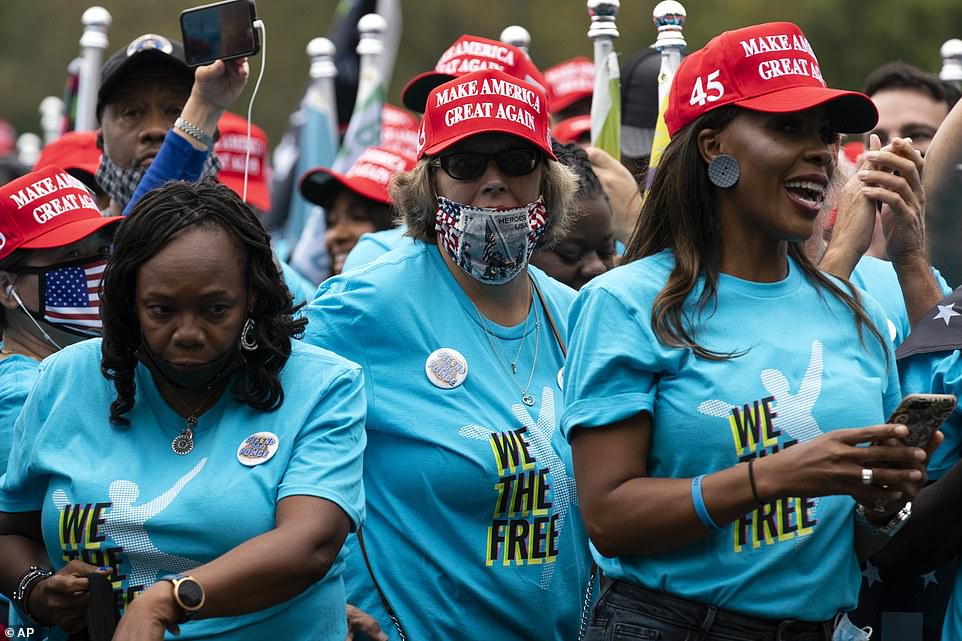 More than 2,000 invitations were sent out to Trump supporters requesting their attendance at Saturday’s event 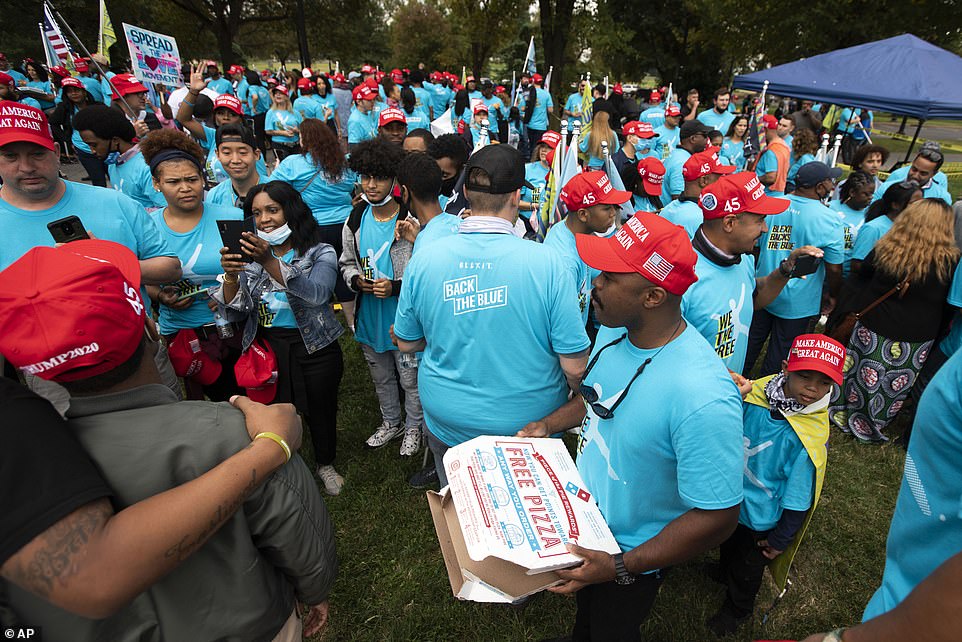 People shared pizza and shunned masks after a rally at The Ellipse, before entering the White House for Trump’s event 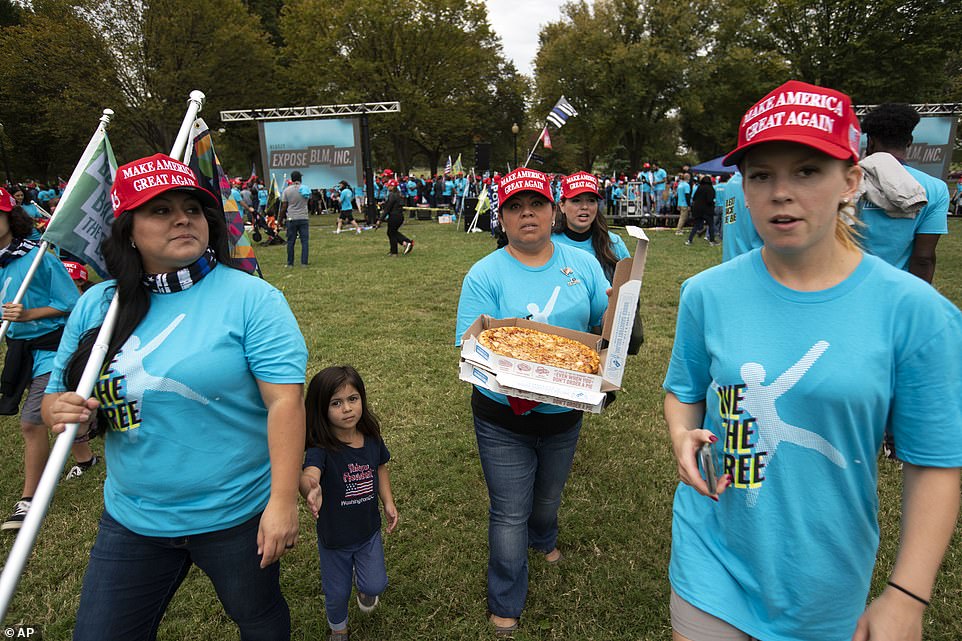 Attendees for the White House event were told they would be given temperature checks on arrival, masks which they are instructed to wear, and access to hand sanitizer

Thousands of protesters have been taking to the streets of America demanding justice and an end to police brutality and racism following a string of cop killings of black men and women.

He will hold a rally in Johnstown, Pennsylvania on Tuesday and in Des Moines, Iowa on Wednesday.

Trump’s campaign earlier announced he was going to Sanford, Florida, for a rally Monday.

Nine attendees at his last rally in Bemidji, Minnesota, have now tested positive for the virus with two people in the hospital.

Last Friday, Trump was transported to Walter Reed hospital in Washington, DC, after he tested positive for the virus late Thursday.

Trump has since left hospital and returned to the White House claiming to be ‘cured’ of the virus.

At least 34 people in Donald Trump’s inner orbit have now tested positive for the virus according to a leaked memo, with at least nine cases among people who attended the ‘superspreader’ event at the White House on September 26 where the president officially announced Amy Coney Barrett as his Supreme Court pick.

The gathering attracted around 100 people – many of them not wearing face masks and all sitting close.