President Donald Trump made his pitch to his home state of Florida in a setting of double rallies on Friday as he ramped up his attacks on Joe Biden, saying his Democratic rival is ‘a corrupt politician who is fully compromised’.

The President told a tightly packed crowd in the Sunshine State that China is trying to help Biden win.

He claimed Hunter Biden’s business dealings with China and the Ukraine netted the Bidens millions even though Joe Biden has released over 20 years of tax returns and there is no sign of that money.

Trump said Joe Biden ‘sold out American workers in every turn, shattering the lives of millions of American families’, while the Democrat’s family raked in money. He said he ran for president because of that kind of corruption.

Trump painted a picture of economic recovery and downplayed the spread of the coronavirus as he claimed his rival would lock up the country and cause an economic depression. 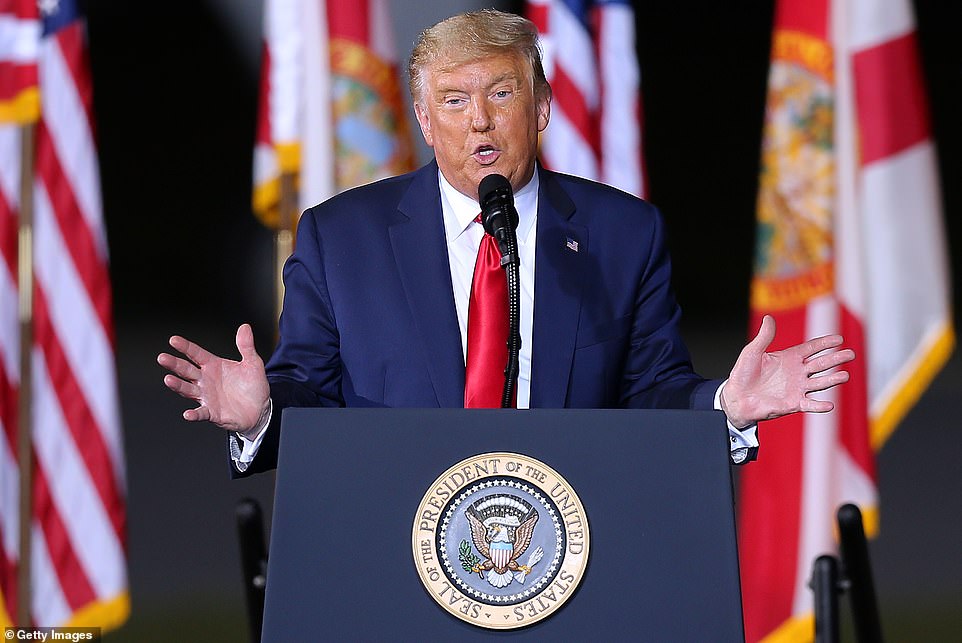 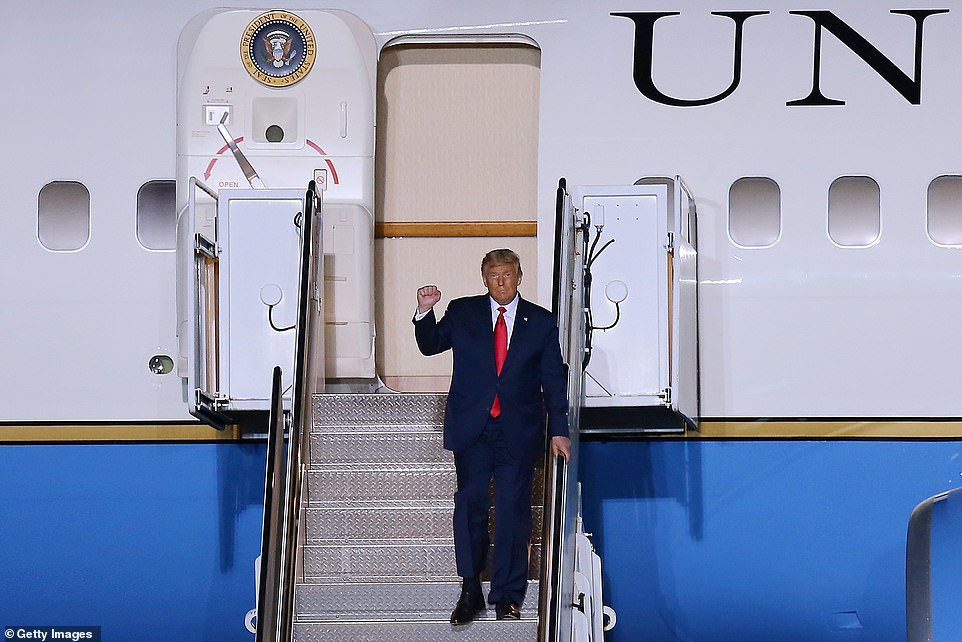 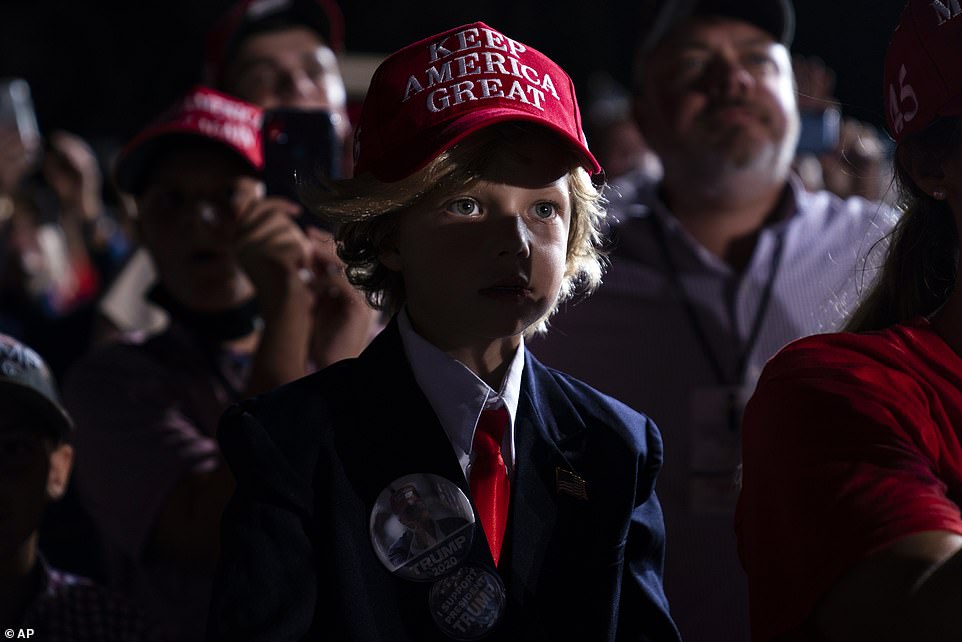 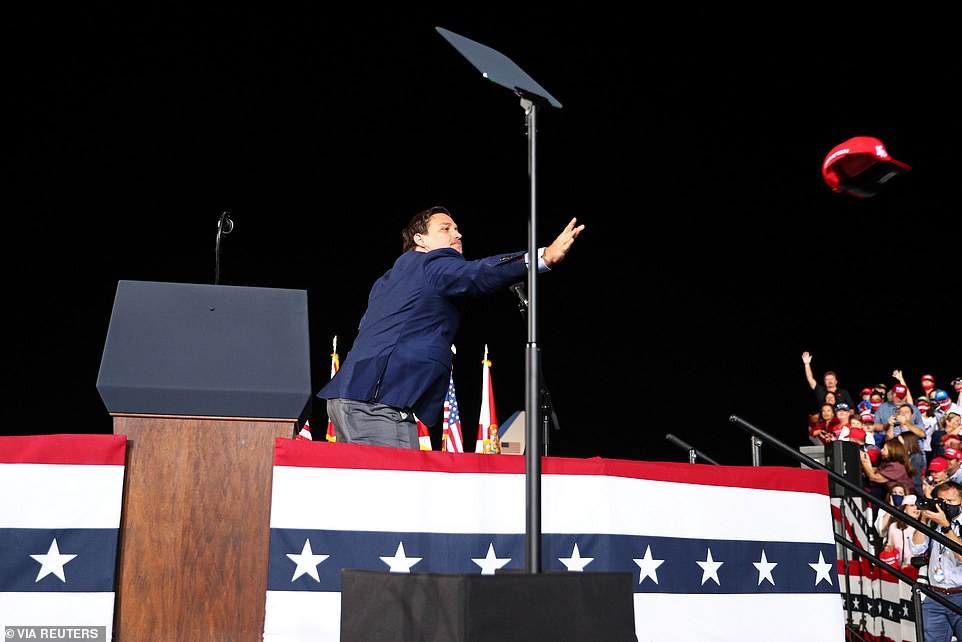 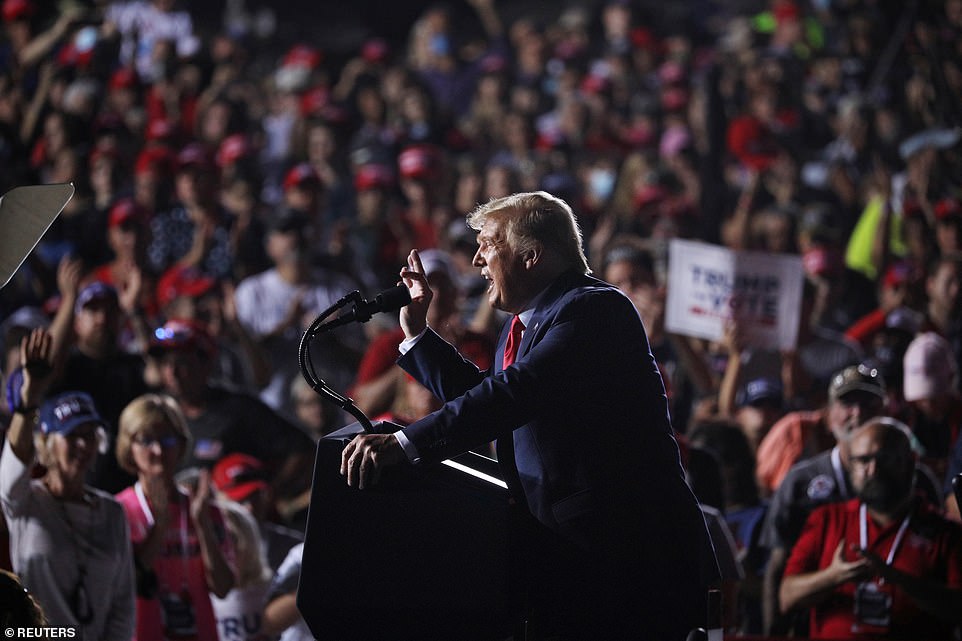 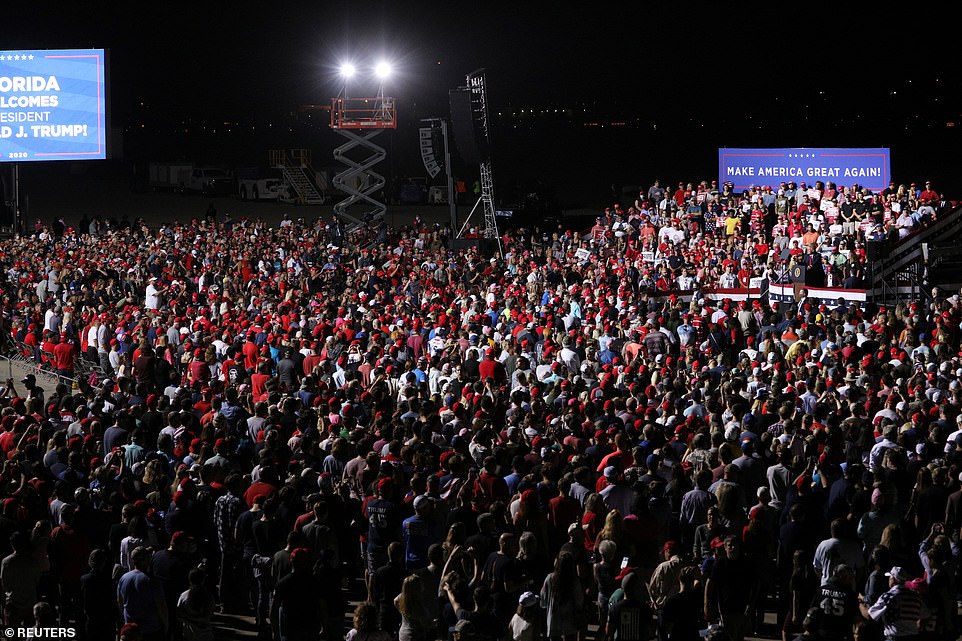 Hundreds came out to cheer Trump, packed in together in a tight space with no social distancing and few wearing masks. Pictured: The rally in Pensacola 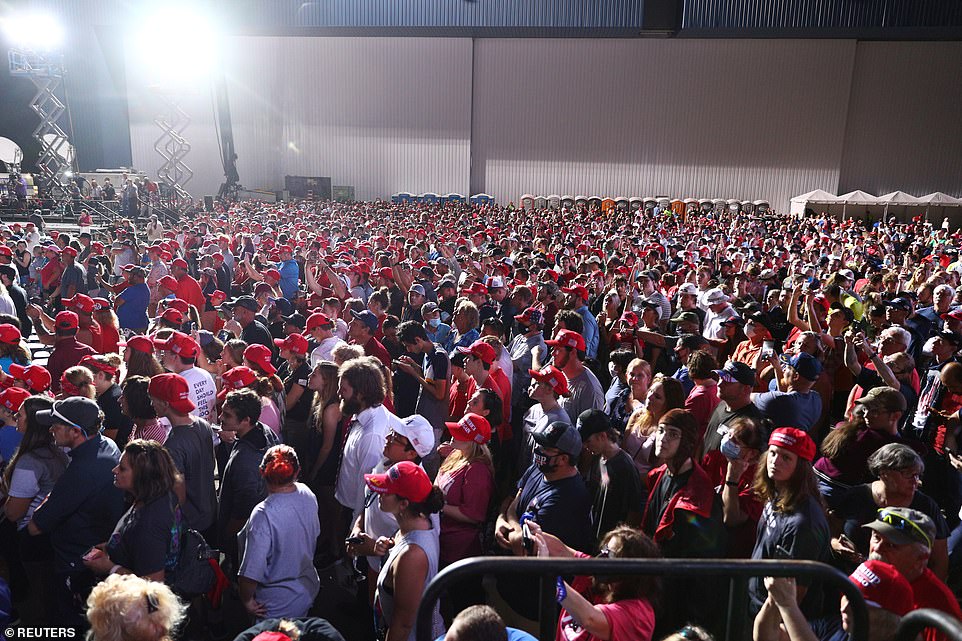 Hundreds came out to cheer Trump, packed in together in a tight space with no social distancing and few wearing masks. The number of infections in Florida is on the rise.

Trump trails Biden in his home state but the race is tight. The RealClearPolitics polling average has Biden up by 2 points, well within the margin of error.

At his Florida rallies, Trump also unleashed a new campaign weapon – videos. He played several videos showing Biden in a bad light on Social Security, fracking Medicare that had the crowds roaring in laughter.

Trump argued he is the voters’ best choice for the next four years.

‘Joe works to enrich his family and I work for the American people,’ he said.

He claimed Biden would eliminate the second amendment and private healthcare, destroy the suburbs, and abolish fracking.

He shrugged off the dangers of COVID, which has killed more 223,000 people.

Trump, who spent four days in Walter Reed Medical Center recovering from COVID, said that made him understand the virus better than anyone.

‘What the hell was it all about,’ he added. He then recounted a discussion with his doctors: ‘They said sir you’ve tested positive. I said tested positive for what?’

But, he noted, after his medical treatment – which included dexamethasone, the experimental anti-viral drug from Regeneron, the antiviral drug remdesivir, and a steroid treatment that can cause mood swings – he feels great. 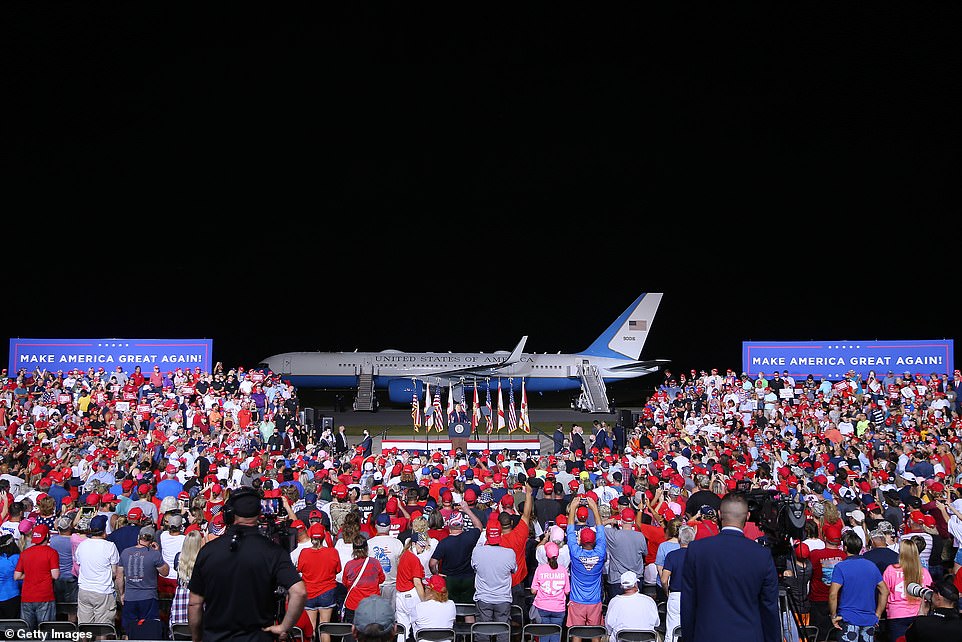 President Trump spoke to a large crowd in Pensacola, Florida, on Friday evening 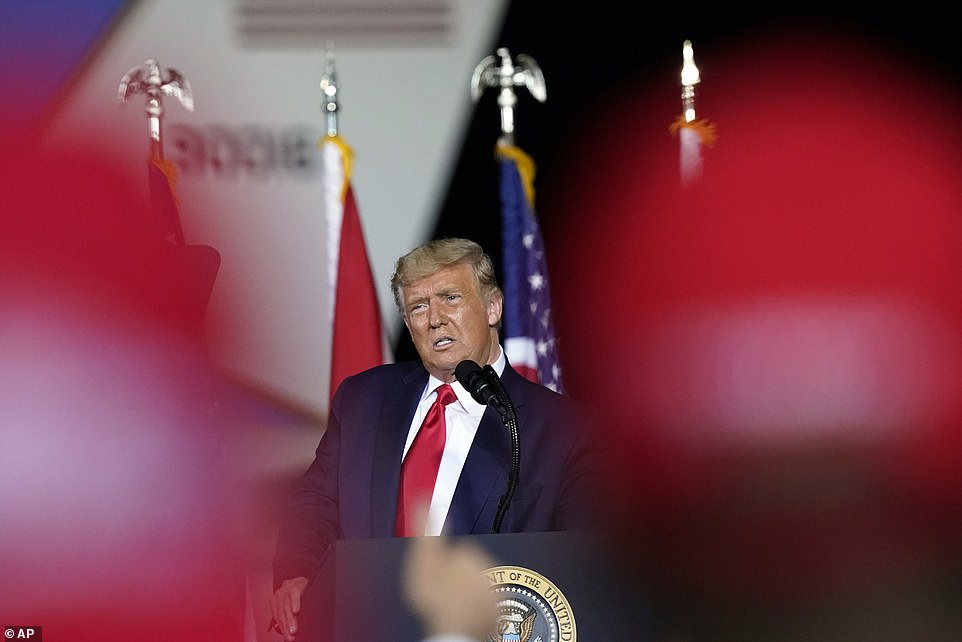 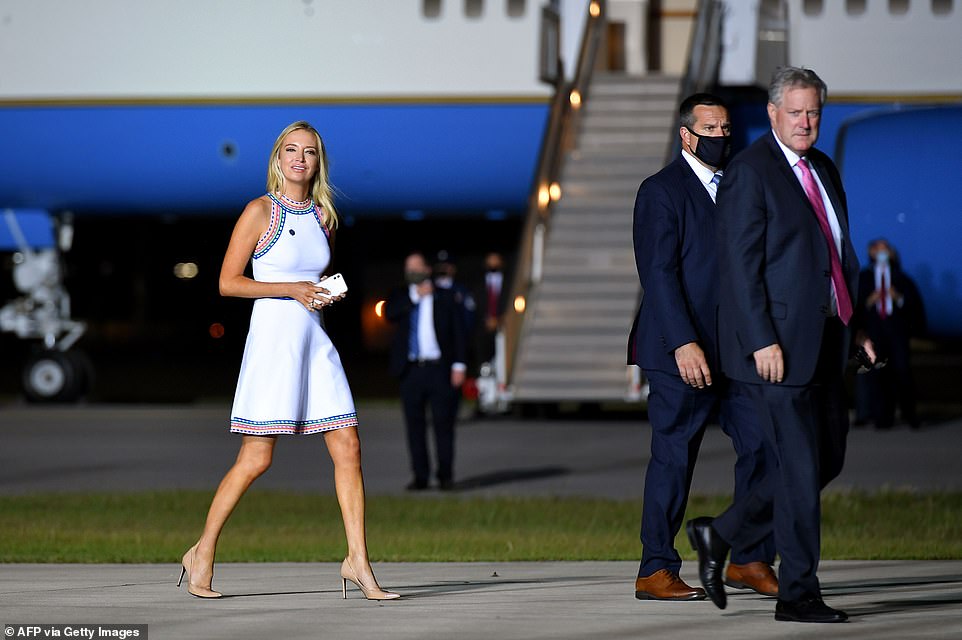 And he claimed Biden would move the country backward on COVID.

‘Joe Biden will delay the vaccine, prolong the pandemic,’ he charged.

He kept up his attacks on Biden, hitting Biden, a known moderate, for being too liberal.

‘Joe Biden has made a corrupt bargain in exchange for his party’s nomination. He has handed control of his party over to socialists communists Marxist left wing extremists,’ he said.

His attacks on Biden echoed many he lobbied at Biden earlier Friday at a rally at The Villages.

He started off hitting his Democratic rival on his oil policy.

‘This is probably the most shocking division ever made,’ Trump said.

‘Could be one of the worst mistakes’ in presidential political history, he argued.

Biden’s pledge to ‘transition away from the oil industry’ shook up that energy sector, leaving the Democratic nominee to try and clarify his stance, saying he would transit it out ‘over time.’

The president argued it would hurt Biden in some of the Midwest states both candidates are courting.

Pennsylvania and Ohio are critical states for winning the White House. Democrats are also making a play for Texas, which has been trending blue. 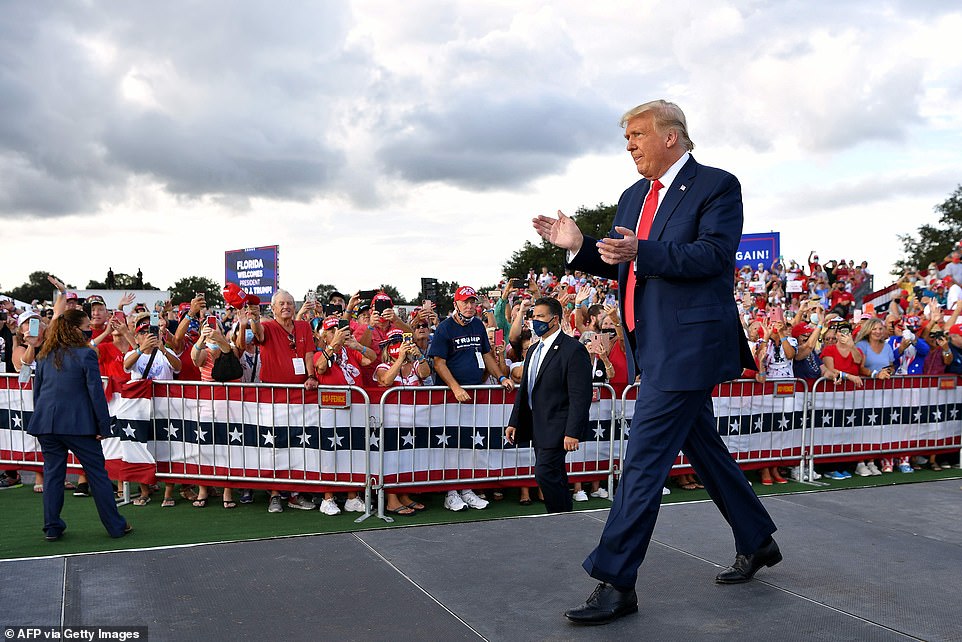 US President Donald Trump claps as he arrives for a campaign rally in The Villages, Florida 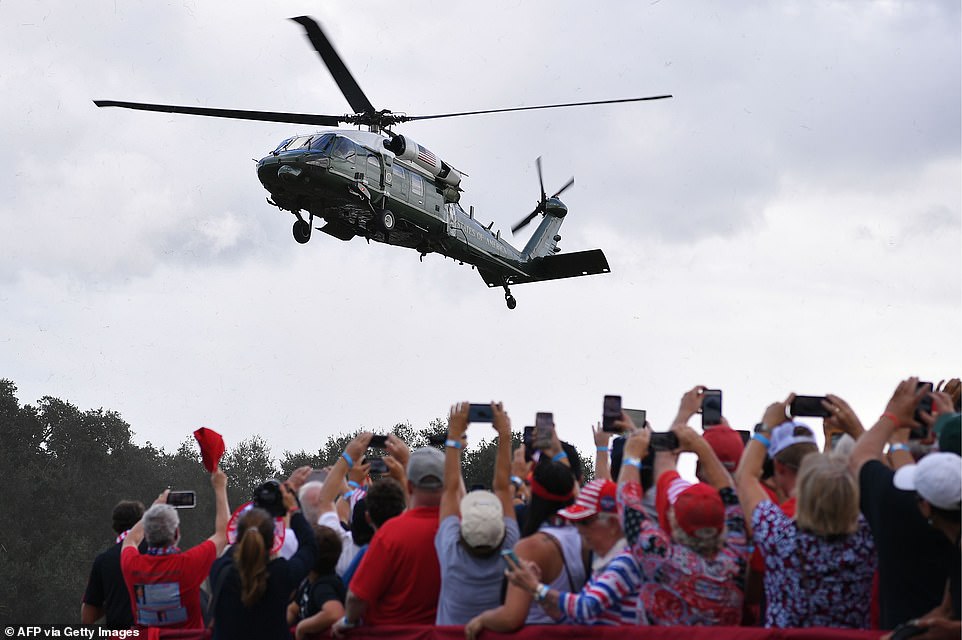 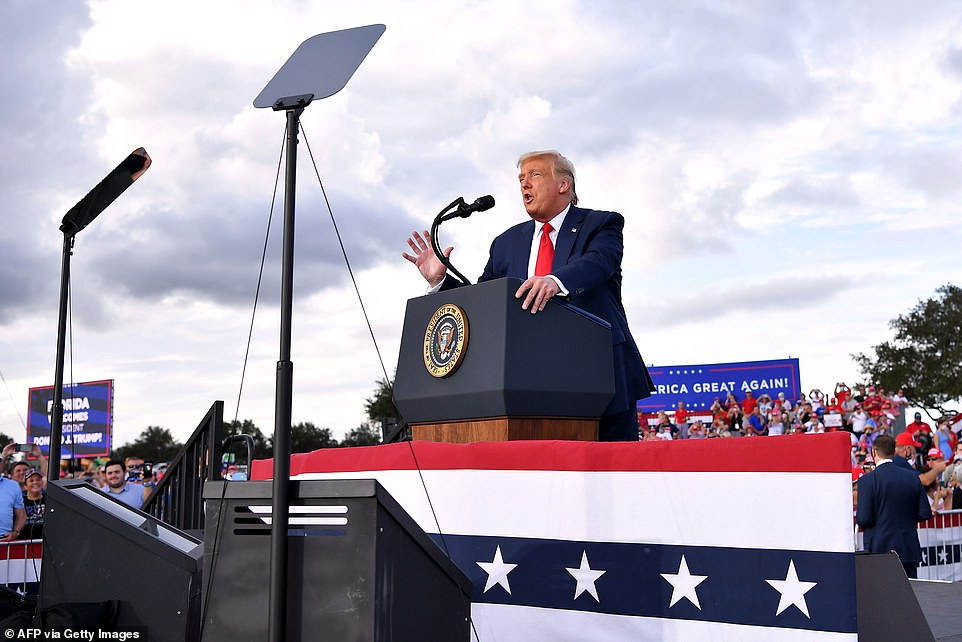 Trump relieved some of his debate moments, recalling how he brought about Biden’s answer on oil and how he attacked Biden on immigration.

He also showed a video – a rare occurrence at a Trump rally – that showed Biden and Bernie Sanders arguing about social security at a Democratic primary debate, a huge issue in Florida.

The ad was a Sanders campaign ad during the Democratic primary.

At his rally in Pensacola he showed a video showing Biden talking about fracking, which Trump claims Biden will end and Biden has said he would not.

Trump went after Biden hard – a change in tone from how he showed restraint at Thursday night’s presidential debate.

He argued Biden has changed his stance on fracking and oil.

‘This guy is either really stupid or lies,’ he said.

He also criticized what he called Biden’s ‘dark, dismal, gloomy’ vision for the future, adding ‘we’re about the American dream.’

He played to the crowd, praising the the location and joked how he liked to watch them drive around on their golf carts.

And he even joked: ‘I’ve got an idea, I will sell Mar-a-Lago and I’ll move to The Villages,’ which led to cheers.

He told the crowd of several hundred, many of whom were not wearing face masks nor social distancing, that the U.S. is ’rounding the corner.’ Coronavirus cases are on the rise in Florida.

‘Normal life is all we want to resume,’ he said in reference to the shutdowns that came with the COVID pandemic.

And he criticized Biden: ‘All he talks about is Covid, Covid, Covid. Because they wanna scare people.’

The president also reminded supporters to cast their ballot, which he plans to do in Palm Beach on Saturday.

He pointed to Florida Governor Ron DeSantis, a close ally, and joked: ‘If we don’t win I’ll never speak to him again.’ 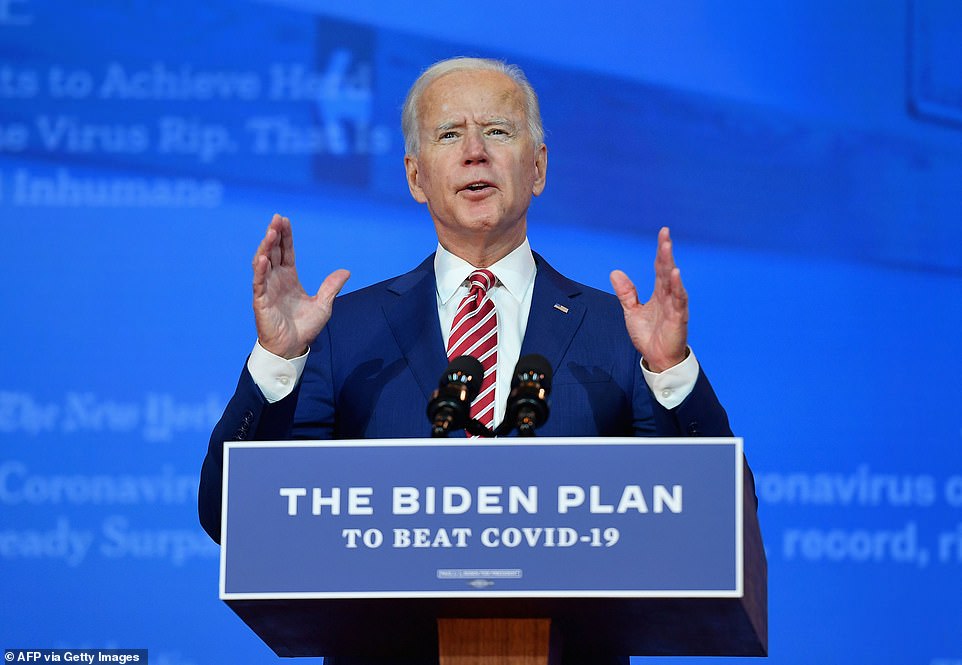 Trump attacked Biden throughout most of his campaign rally 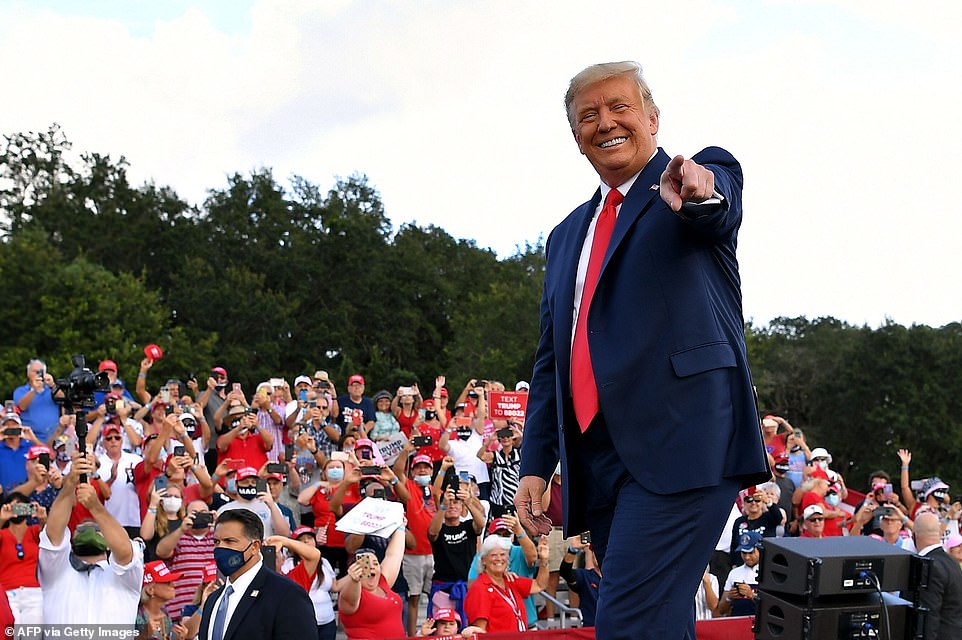 President Trump is holding two rallies in Florida on Friday 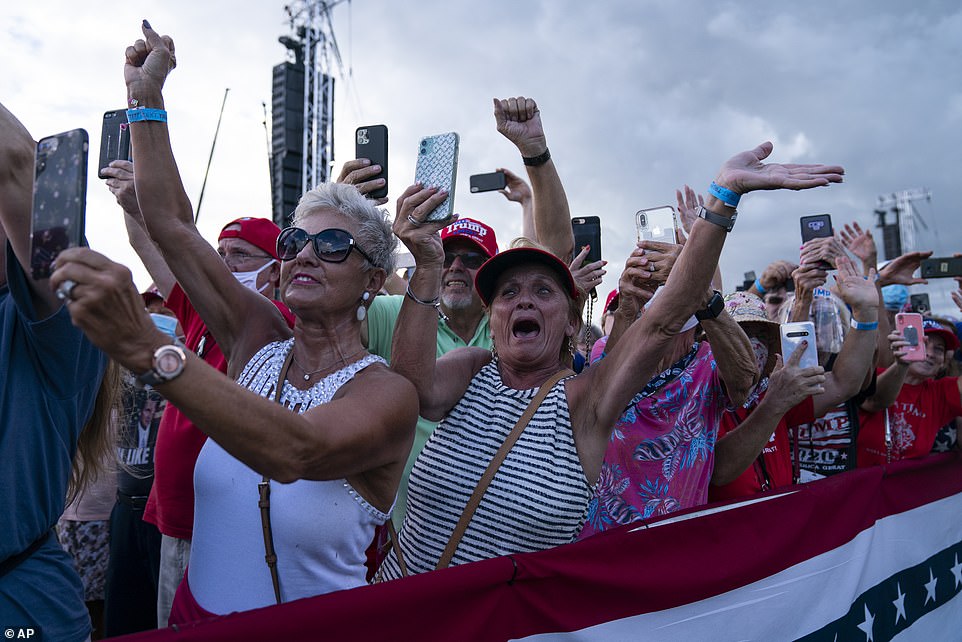 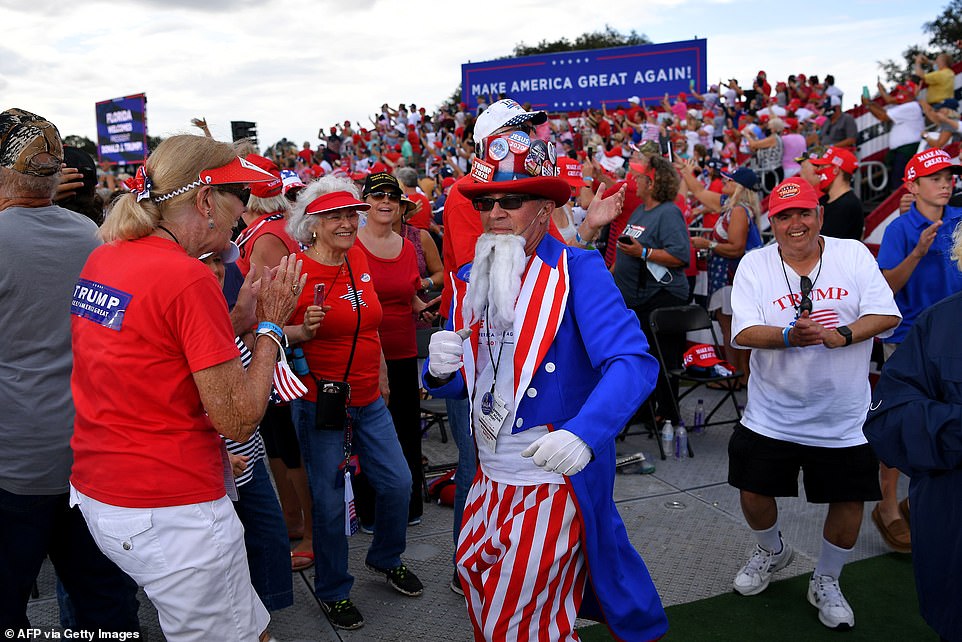 A Trump supporter dances in the crowd 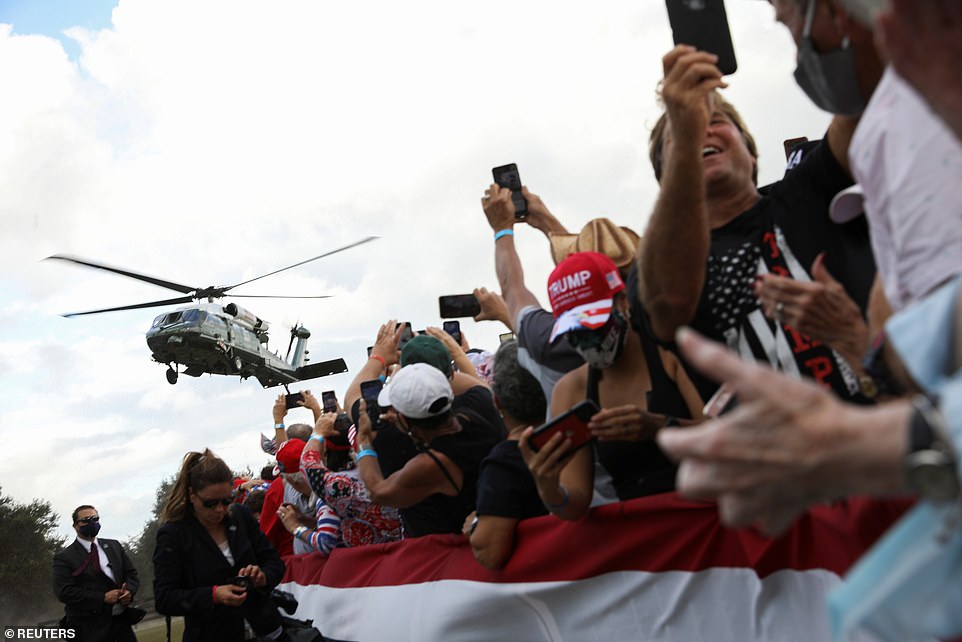 Marine One approaches The Villages Polo Club for landing

‘I’m old fashioned I guess. I like to get in line,’ the president said. In Florida’s primary he voted by mail.

‘We’ll catch up later on,’ he said of reports Democrats are ahead in early voting.

The president made a dramatic entrance to the rally site, a polo field in the middle of the state. Marine One circled overhead as the crowd cheered and took photos on their cell phones. It landed to the side of the rally site for Trump to walk out to his signature song ‘Proud to Be An American.’

Most of Trump’s remarks were focused on attacking Biden, including reiterating his attacks on Biden’s on Hunter for his business ties in the Ukraine and China.

‘Where’s Hunter,’ he said, getting cheers with his popular campaign line.

He also joked about Hunter being seen again, adding: ‘Hunter you gained weight.’

President Trump also returned to one of his 2016 arguments that helped him win the White House – his outsider status when it came to Washington D.C.

‘I’m not a politician,’ he said to huge cheers.

Trump is kicking off his final stretch of campaigning before November 3 with two rallies in Florida on Friday and three rallies in three states: North Carolina, Ohio, and Wisconsin. On Sunday he’ll campaign in New Hampshire, and, on Monday he’ll be in Pennsylvania.