Trump to leave hospital on Monday after weekend Covid treatment 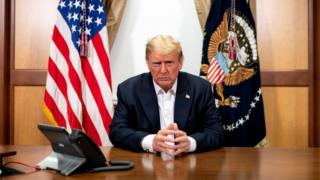 US President Donald Trump says he will be released from hospital later on Monday, four days after being admitted with Covid-19.

Just before a scheduled briefing from his doctors, Mr Trump tweeted he would be leaving at 18:30 (22:30 GMT), adding that he felt “really good”.

But questions remain over the seriousness of Mr Trump’s illness after a weekend of conflicting statements.

The true scale of the outbreak at the White House remains unclear.

“Don’t be afraid of Covid. Don’t let it dominate your life. We have developed, under the Trump Administration, some really great drugs & knowledge. I feel better than I did 20 years ago!!”

There are more than 7.4 million Covid-19 cases in the US and the virus has killed nearly 210,000 Americans.

The president’s discharge comes as more new cases have been reported among White House staff.

Many of these people went to an event at the White House Rose Garden on 26 September that is now being scrutinised as a “super-spreader event”.

The White House has not revealed how many staff members have tested positive since Mr Trump’s own diagnosis.

Painful transition? Poland agrees to phase out coal mines by 2049