Trump tweets a speech that he will direct to his supporters, coinciding with the Congressional vote on the election results

US President Donald Trump announced that he will deliver a speech to his supporters from the White House on Wednesday morning, coinciding with the demonstrations in support of him and the congressional vote to ratify the election result, and he said: “Tomorrow I will give a speech at eleven in the morning .. attend early .. the doors will be open from seven In the morning … there will be crowds. “ 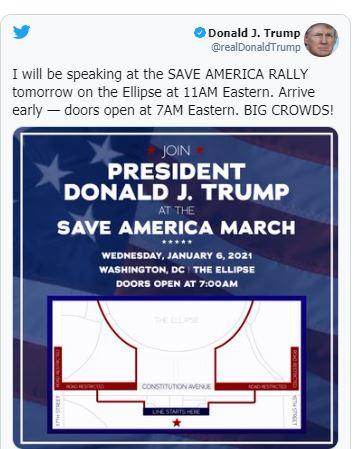 For its part, the US Metropolitan Police, Washington, on Tuesday, published a map of the streets that will be closed in anticipation of the demonstrations in support of President Trump, and said: “From Tuesday, January 5, 2021, until Thursday, January 7, 2021, many changes are expected to occur in the District of Columbia in conjunction with the demonstrations. “.

She added, “There will be parking restrictions and possible street closures that motorists must observe.” Thousands of Trump supporters are planning a hypothetical “second inauguration” for him on January 20, when Democratic candidate Joe Biden will be inaugurated as president on the outcome of the presidential election.

And more than 60,000 people have indicated on “Facebook” that they intend to participate in the event, which was announced as “President Donald Trump’s second inauguration ceremony.”