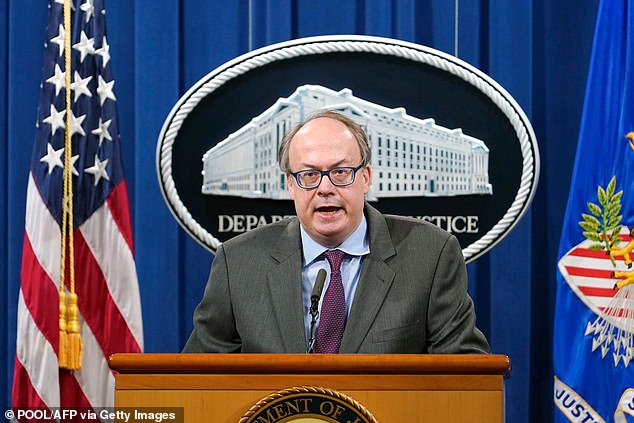 Donald Trump planned to fire his Attorney General for refusing to overturn election results and replace him with one who would, according to a bombshell report in The New York Times.

Jeffrey Rosen, who was serving as acting Attorney General after Bill Barr resigned just before Christmas, would not agree to upend the presidential election result in Georgia.

He also pushed Rosen to appoint special counsels, including one who would look into Dominion Voting Systems – an election machinery company, which Trump and his supporters accused, without any evidence, of switching votes from Trump to Joe Biden.

Trump worked with another Justice Department official, Jeffrey Clark, to try and overturn the Georgia vote.

Jeffrey Clark, a Justice Department official, was considered as a replacement for the AG

He even went as far as staging an ‘Apprentice-style’ interview with Clark and Rosen, with both men arguing to have the job.

When word reached other Justice Department officials of the plan to replace Rosen with Clark, and throw the presidential election into turmoil, they all agreed to resign en masse.

Trump then backed down.

Clark was nominated by Trump to be the Assistant Attorney General of the Environment and Natural Resources Division (ENRD), and sworn into office on November 1, 2018.

In September he also asked Clark to be the Acting Assistant Attorney General for the Civil Division.

Clark, who graduated from the Biden School of Public Policy and Administration at the University of Delaware in 1993), followed by the Georgetown University Law Center, told the paper that he had in no way acted improperly.

‘Senior Justice Department lawyers, not uncommonly, provide legal advice to the White House as part of our duties.

‘All my official communications were consistent with law.’

An adviser told the paper that Trump has consistently argued that the justice system should investigate ‘rampant election fraud that has plagued our system for years.’

The adviser added that ‘any assertion to the contrary is false and being driven by those who wish to keep the system broken.’

A Justice Department spokesman declined to comment, as did Rosen.

Rosen was serving as the deputy Attorney General when Barr announced his resignation, on December 14.