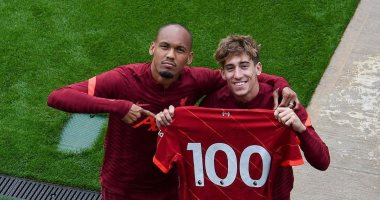 The star Costas Tsimikas and the Brazilian Fabinho Tavares, players of the English club Liverpool, were keen to flirt with the Egyptian star Mohamed Salah after reaching the number one goal. 100 In his journey with the English club in the Premier League, he published a picture of them holding the shirt of the celebration of the Egyptian pharaoh.

Tsimikas wrote sarcastically on the photo he posted on his personal account on the Instagram website: “We celebrate the shirt that bears the number of goals that Mohamed Salah and I scored together, I think he may have contributed more, congratulations to the Egyptian king, the legend on and off the field.”

Mohamed Salah had expressed his great happiness by scoring his 100th goal in the Premier League, saying in media statements: “Scoring this many goals with Liverpool is unusual, I was participating in the winger position all the time, and I think it is difficult to achieve such a number. You score goals, you play in that position, but the most important thing for me is to help the team win.”

And about being one of the 5 fastest players to reach 100 goals in the English Premier League, Mohamed Salah said: “I am very happy, I scored 98 goals with Liverpool.”

Mohamed Salah is seeking to compete strongly for the title of top scorer in the English Premier League this season, to achieve his third title in a historical achievement, after the 2017-2018 and 2018-2019 seasons, and he was close to winning the title last season, had it not been for Harry Kane, the Tottenham Hotspur star, by a single goal.

Joao Felix: I recovered well, and the Atletico group in the Champions League is difficult