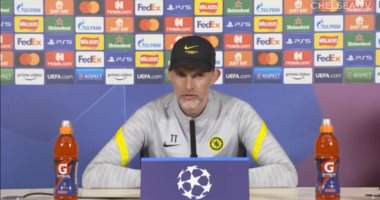 Chelsea coach Thomas Tuchel confirmed the readiness of team star Mason Mount against Southampton, scheduled for Saturday at Stamford Bridge, as part of the seventh round of the English Premier League.

“Mason Mount is ready for the match,” Tuchel said during the match press conference. “James is not available to face Southampton tomorrow, even if Mount is injured, we have to win games without him, without Pulisic, Kante and James.”

Tuchel commented on Lukaku’s scoring fast, saying: “Man City made him feel isolated, there will always be matches like this, like the Juve match, where you have nowhere to go, these matches exist, we will talk differently if he scores in the 80th minute, which he usually scores There is nothing big to worry about.”

On the pressure of the matches, he said: “It makes sense to play that much. It’s like we’re mentally tired or maybe from the expectations we’re setting. Some years ago someone told me that if players looked like that, you could threaten them or calm them down. 99% of the time you calm them down.”

He continued: “We must trust in what we do, what we are, support the group and allow the players to support each other, we must focus on solutions, not problems because they are not too big. The results are not what we expect, but we trust in ourselves.”

Chelsea fell into the trap of defeat at the hands of Manchester City with a goal unanswered in the last round, to freeze its balance to 13 points in third place in the table.

The ferritin test reveals the iron stores in your body.. know all about it