Fox News presenter Tucker Carlson has demanded cameras to be put in every classroom to ‘oversee the people teaching your children’.

It came during a broadcast on Tuesday night about critical race theory (CRT), which he branded ‘civilization-ending poison’.

Carlson showed a clip of a black father attending a school board meeting in Illinois where he criticized CRT.

The presenter said the theory was ‘more than BS’, claiming that an ‘overwhelming majority of Americans’ think that ‘this is insane’ and ‘think you should judge people by what they do, not on the basis of their skin color’. 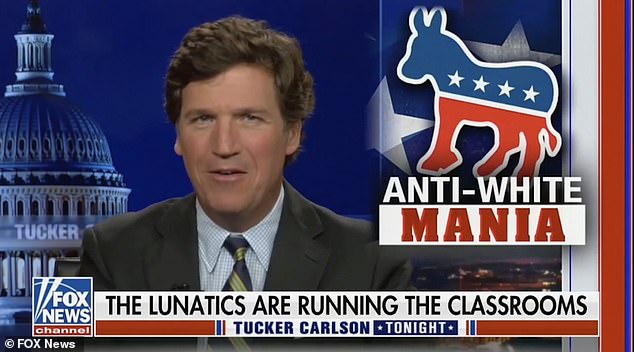 Carlson said: ‘How widespread is it? Well, we can’t really be sure until we finally get cameras in the classroom, as we put them on the chests of police officers, until we finally get a civilian review board in every town in America to oversee the people teaching your children, forming their minds – and let’s hope we get both of those very soon.

‘But until we do we can’t know exactly how widespread this is but there are indications.

‘We know that these ideas, this poison, has made it all the way to expensive private schools in central Ohio.’

In footage shown by Carlson, the father told the school board meeting: ‘You are going to deliberately teach kids that this white kid right here has got it better than you because he’s white?

‘You are going to purposefully tell a white kid, “oh the black people are all down and oppressed”?

‘How do I have two medical degrees if I’m sitting here oppressed?’

Other parents and attendees of the meeting burst into applause and cheered as the father tried to quieten them down so he could continue talking. 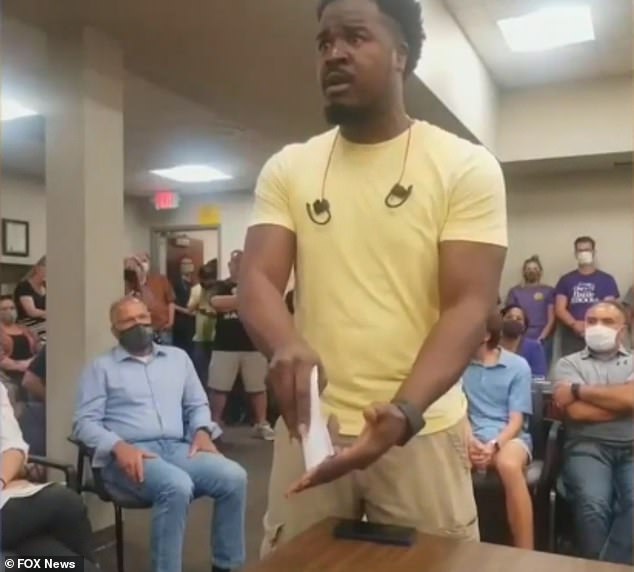 Carlson showed a clip of a black father attending a school board meeting in Illinois where he criticized CRT, calling it ‘BS’ and explaining that he worked his way through college and earned two medical degrees

‘You going to tell me that somebody that looked like all you white folks kept me from doing that? Are you serious?’

He continued: ‘I do this stuff on a daily basis. I’m in the hood, I’m in the communities. I’m out there with folks in their face. I’ve been doing stuff since I was 18 years old, talking to black folks, and you know what? None of them are buying this nonsense.’

The father added that the ‘CRT stuff’ is ‘BS’.

According to Education Week, CRT is a concept which is more than 40 years old with the core idea that ‘race is a social construct’.

It says that racism is embedded in legal systems and policies, rather than just being the result of individual biases and prejudices.

CNN reported that the theory’s teaching is banned in public schools in Tennessee and Idaho.

Conservatives have accused the theory of poisoning discussions on racism, while former president Donald Trump called it a ‘Marxist doctrine’ which holds that ‘America is a wicked and racist nation, that even young children are complicit in oppression, and that our entire society must be radically transformed’.

Founding critical race theorist and law professor Kimberlé Crenshaw said that acknowledging the history of racism in the US is seen as ‘anti-American’. 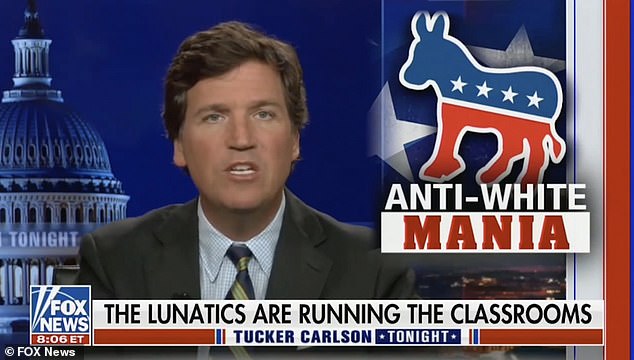 The presenter said the theory was ‘more than BS’, claiming that an ‘overwhelming majority of Americans’ think that ‘this is insane’ and ‘think you should judge people by what they do, not on the basis of their skin color’

Earlier today, it was reported that a US Air Force Academy Professor argued CRT should be taught to all cadets so that they can understand how the United States was ‘shaped by racism’.

Political scientist Lynne Chandler García said the Constitution brought about ‘inequality’ and that George Washington was a racist. She argued that the history of the U.S. proved that ‘racism has shaped both foreign and domestic policy’.

Garcia, who teaches the Marxist theory at the USAF Academy in Colorado Springs, said she agreed with the Joint Chiefs of Staff Chairman General Mark Milley who recently told Congress that CRT ‘is not unpatriotic.’

CRT exploded to prominence in the spring as it started to appear in classrooms from kindergarten to Grade 12, leading to several bans including in Florida and Texas, however it has been taught in higher education for decades.

It says that racism is not the result of nature or biology but that it is a social construct, an idea invented to exploit and control minorities.

It argues racism is a structural problem in the United States, particularly towards black people, embedded in its institutions, legal system and even the Constitution.

LAKE ORION, Mich. – The state of Michigan is investigating after the sudden demise of lots of of frequent...

A lady who defected from North Korea and got here to the US says she was mugged by three...

The place there have been as soon as three statues — depicting a scene from the founding of Kansas...

Premarket stocks: Didi's IPO was a disaster. Here's why Chinese companies keep listing in the US