The Pentagon has confirmed to Tucker Carlson that they are using an Air Force base in Texas to fly illegal immigrants on passenger planes across the country to be ‘resettled’ in the U.S.

The transportation of migrants away from the border and inland on buses had been reported before, as had the flying of migrants from one border crossing to another for deportation, in what are termed ‘lateral flights’.

The military airbase, Laughlin, was previously used by ICE in 2019, under Donald Trump, according to San Angelo Live.

‘This show has confirmed that the Biden administration has enlisted the U.S. military to move illegal immigrants secretly around our country,’ said Carlson on Wednesday night. 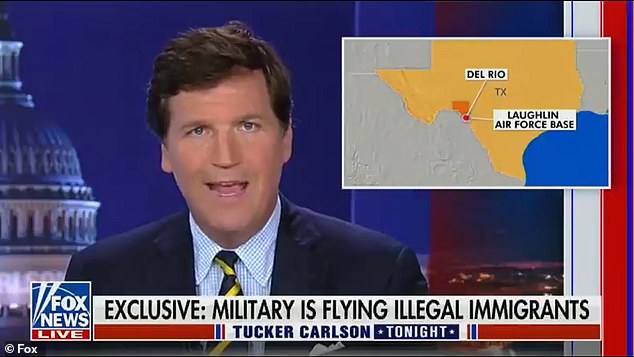 Tucker Carlson on Wednesday night told how a military air base was being used for passenger planes transporting migrants, in a repeat of May 2019 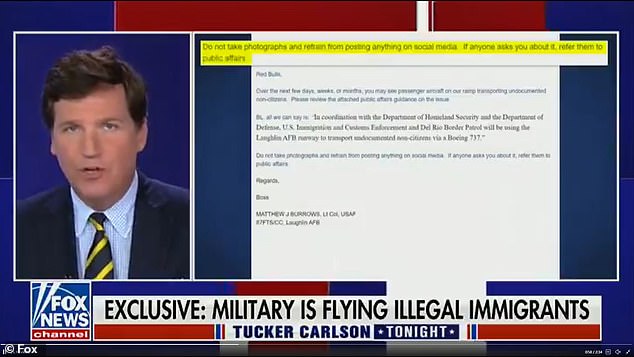 Carlson showed off an email sent by Lt Col Matthew Burrows, telling his subordinates what was happening

He pointed to an email sent by Lieutenant Colonel Matthew Burrows, stationed at Laughlin air force base in Texas, explaining what was happening to his subordinates – and asking that they keep it secret.

‘Over the next few days, weeks, or months you may see passenger aircraft on a ramp transporting undocumented non-citizens,’ he wrote.

‘Please review the attached guidance on the issue.

‘Do not take photographs and refrain from posting anything on social media.’

Chris Mitchell, a Pentagon spokesman, confirmed that Laughlin was being used again for the immigration authorities’ flights.

He described the flights from Laughlin as ‘noncitizen movement’, as part of Immigration and Custom Enforcement (ICE)’s ‘mission’.

It was unclear where they were flying to. 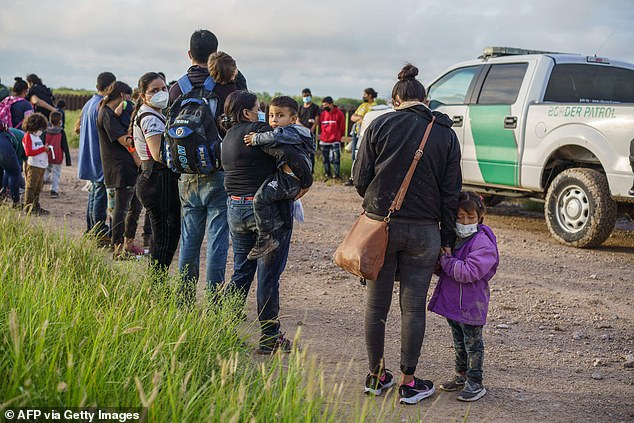 Migrants are seen in Penitas, Texas, on July 8 waiting to be processed by Border Patrol 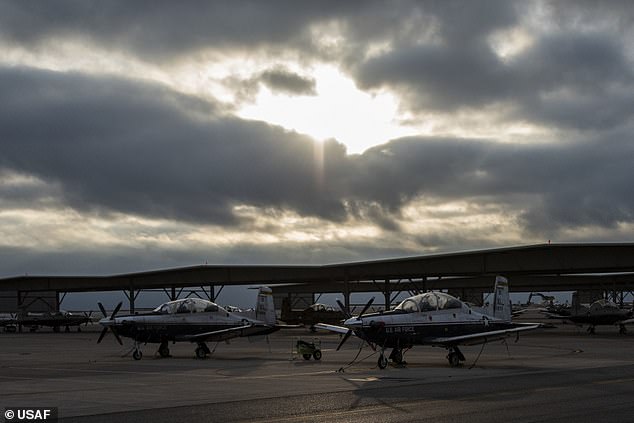 Military planes are seen at Laughlin air force base in Texas. ICE are using the air force base to transport, on passenger planes, migrants across the country

Gonzales wrote to Jennifer Miller, Acting Assistant Secretary of the Air Force for Installations, to request access at Laughlin for ICE to fly migrants to their final destination, rather than releasing them in the Del Rio area.

‘The Del Rio Border Patrol Sector has been stretched beyond their means by the overwhelming amount of migrants being apprehended on a daily basis,’ said Congressman Gonzales.

‘By utilizing Laughlin Air Force Base, ICE could address the high number of migrant releases and alleviate the pressure that this crisis has inflicted on border communities.’

It appeared that Miller has approved his request.

The Biden administration has, since March, been flying migrants from one processing center to another, from where they are then deported.

ICE have not responded to questions.

‘The question is, where are all these people going?’ asked Carlson.

‘Several times ICE promised us additional details but in the end we never heard back.

‘Apparently Americans do not have a right to know where foreign nationals are being resettled in their own country.’

Carlson returned to his theme of ‘white replacement theory’ – the idea that Democrats are deliberately bringing in Hispanic migrants, in the belief that they are more likely to vote Democrat than Republican.

The theory sparked widespread anger, with the Anti-Defamation League accusing Carlson of parroting white supremacist ideas, and calling for him to be fired. 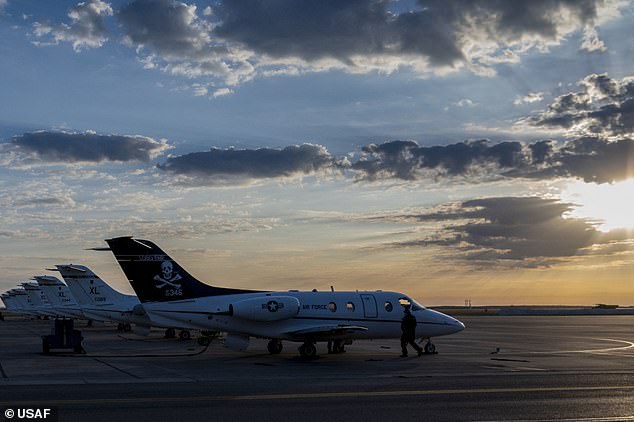 On Wednesday, Carlson repeated his accusation, claiming without evidence that the migrants were being transported inland and saying: ‘Oh, changing the electoral map, are we?

‘Serving the businesses that paid for you to get elected are we? Yes we are.

‘What you’re watching is demographic transformation.

‘In our country, without our consent and in violation of our laws. That is happening.

‘Our job is to shut up and accept it.

‘We know they will call us names if we don’t accept it, but no thanks.

‘What’s happening, what they are doing, is wrong.

‘It is, moreover, a violation of the most and basic promise of democracy, which is that citizens get to control who runs the government.

‘We as citizens have an absolute right to know what exactly they are doing and we are going to try to learn.’

U.S. officials encountered 180,034 migrants during the month of May, reaching a new peak under President Joe Biden – a one per cent increase compared to April’s numbers.

June’s figures are not yet out, the number of migrant encounters at the U.S.-Mexico border has reached the highest point in nearly two decades.

Woman and son rescued after crashing into river

RAF chiefs to slash flying hours of pilots in training

BROOKSVILLE, Fla. — A lady who was shot at a surgical procedure middle by a person...