Tucker Carlson has slammed an NYC study that claimed there is no real censorship of conservatives on social media as ‘farcical’ – after the authors admitted there is no evidence to support their findings.

In their report, the authors stated that claims of anti-conservative bias are ‘a form of disinformation: a falsehood with no reliable evidence to support it.’

But he highlighted how, on page 16 of the 28-page report, they also state there is insufficient evidence to make conclusions. 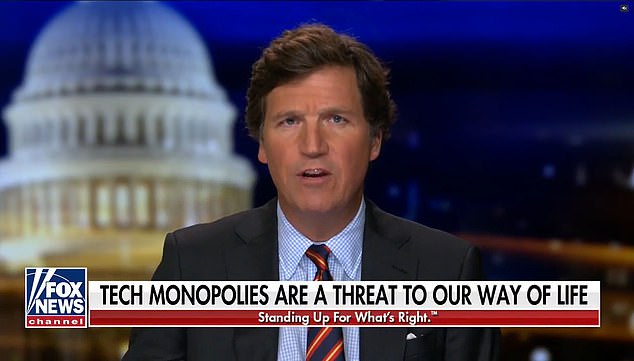 A joke: Tucker Carlson on Tuesday night slammed NYU for a study that just used anecdotal evidence to claim there was no censorship of conservative social media

‘Conservatives do get suspended or banned for violating Twitter’s rules against such things as harassment, hateful conduct, or, as in Trump’s case, glorifying violence,’ the authors write.

‘But liberals are excluded in this fashion, as well.

A livid Carlson turned on the study.

‘So, to be clear: This NYU study has proven there is no censorship from the tech monopolies,’ he said, with heavy sarcasm.

‘But if you persist in complaining about this censorship, which does not exist, you may be spreading disinformation.

‘It almost reads like a press release from Silicon Valley, and that’s because it is.’

Carlson pointed out that Twitter’s press office sent round an email promoting the findings.

‘I wanted to be sure you saw a report out today from the NYU Stern Center for Business and Human Rights,’ the spokesperson wrote, according to Carlson.

‘It found there is no evidence to support claims of anti conservative censorship on social media and that these claims are ‘a form of disinformation’.’

Carlson also said the study could not be taken seriously because it was came from an organization funded, in part, by the philanthropy of Craig Newmark, the Craigslist founder.

Carlson said he was ‘one of the many Silicon Valley billionaires who paid for the Joe Biden for President campaign’. 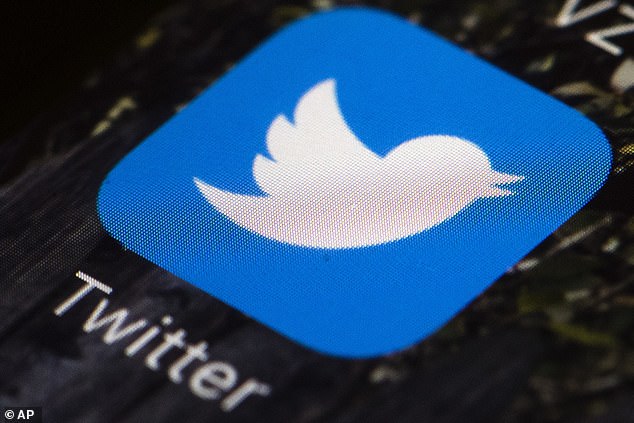 Carlson, however, dismissed their conclusions.

Conservatives have been increasingly vocal about censorship since Donald Trump and thousands of spreaders of the conspiracy theory QAnon were removed from social media, amid fear of inciting violence ahead of the inauguration.

Many moved to the platform Parler, but the plug was pulled on that by Amazon Web Services amid concern that the unmoderated forum would stir up potentially dangerous conflicts.

Carlson’s segment came hours after conservative rival Newsmax was forced to cut off MyPillow CEO Mike Lindell live on air, when he started spouting election fraud conspiracy theories during a segment about MyPillow being permanently banned from Twitter. 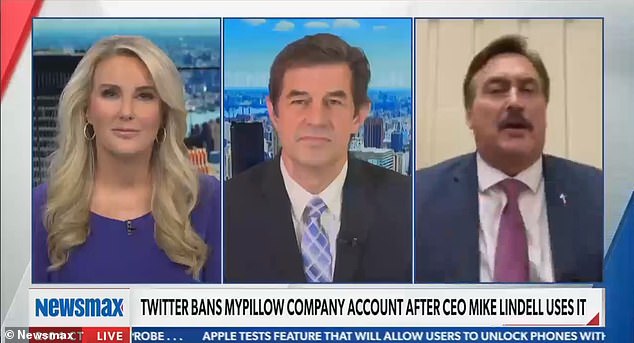 Bob Sellers, an anchor for the right-wing news outlet, ended up storming off camera Tuesday night as he tried to fact-check Lindell and stop him pushing unfounded claims about Dominion Voting Systems rigging the presidential election.

The ban came after Lindell appeared to use the company account to call for Twitter CEO Jack Dorsey to be jailed for ‘election fraud’ – one week after Lindell himself was barred from the platform for supporting Donald Trump‘s claims of election fraud.

Lindell was asked about the ban on Newsmax Tuesday night but instead launched into a rant spewing out unfounded claims of fraud in the presidential election and claiming he had ‘100 percent proof’ that Dominion had committed mass voter fraud.

Dominion Voting Systems has already threatened to sue both Newsmax and Lindell over them pushing conspiracy theories about its ballot counting machines. 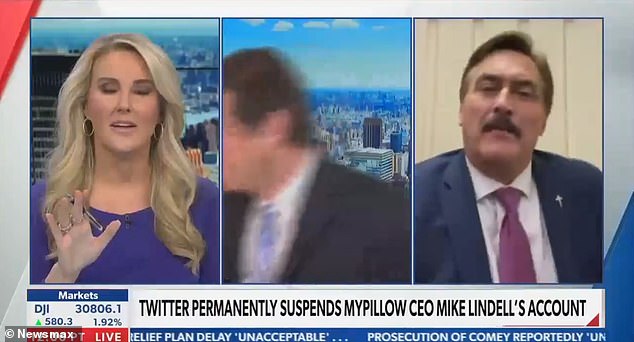 Bob Sellers, an anchor for the right-wing news outlet, ended up storming off camera Tuesday night (center) as he tried to fact-check Lindell and stop him pushing unfounded claims about Dominion Voting Systems rigging the presidential election

‘What happened with your Twitter account and the company page?’ co-host Heather Childers asked Lindell at the start of the segment.

‘Well, first mine was taken down because we have all the election fraud with the Dominion machines,’ said Lindell.

‘We have 100 percent proof,’ he said, continuing as Sellers interrupted.

‘Mike, Mike, Mike – thank you very much,’ Sellers said, repeating Lindell’s name multiple times to try to get him to stop talking.

Sellers fact checked the MyPillow boss explaining there is no evidence for his claims as Lindell proceeded to shout over him.

‘You’re talking about machines that we at Newsmax have not been able to verify any of those kinds of allegations,’ Sellers said.

‘We just want to let people know that there’s nothing substantive with that we’ve seen.’

Sellers then read a written statement saying that Newsmax, a conservative outlet popular with Trump, ‘accepts the results as legal and final’ – while Lindell continued to shout over him.

‘Let me read you something,’ he said.

‘While there were some clear evidence of some cases of vote fraud and election irregularities, the election results in every state were certified, and Newsmax accepts the results as legal and final. 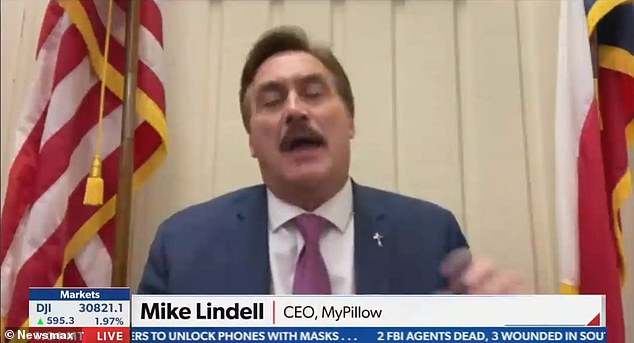 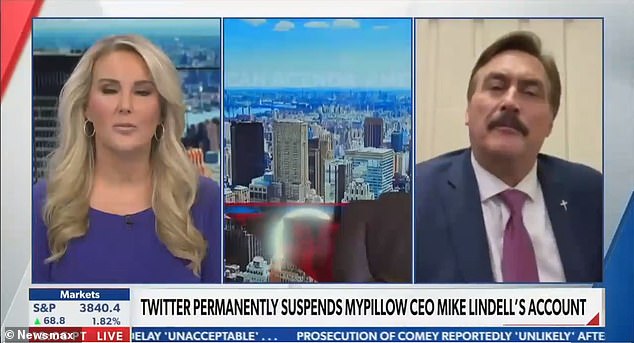 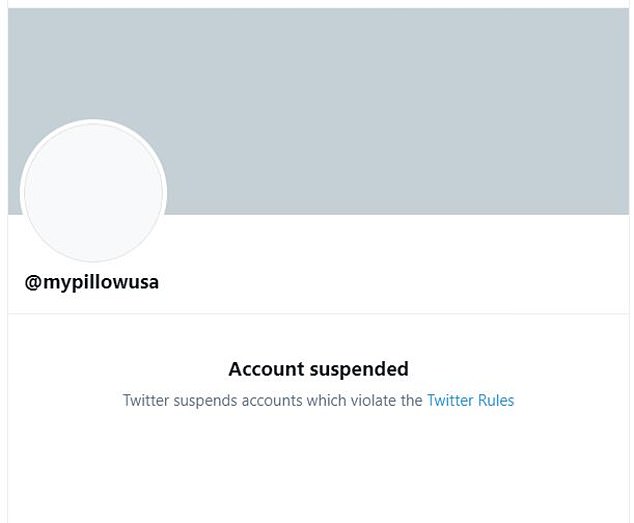 ‘The courts have also supported that view,’ he added.

Sellers tried to pull the conversation back to the topic Lindell was brought on the show for, saying ‘we wanted to talk to you about cancel culture.’

The two men both continued to speak at the same time, with Childers briefly attempting to wade in to the ruckus.

As Lindell continued to shout over him, Sellers asked him if he thought the Twitter ban should be temporary rather than permanent.

Lindell appeared unable to hear the anchor over his own voice as he paused before saying: ‘What?’

‘Could you make an argument that this could be a temporary banning rather than permanent?’ Sellers repeated, while Childers chuckled.

Lindell once again launched into the unfounded fraud claims: ‘No, I want it to be a permanent because you know what? They did this because I’m revealing all the evidence on Friday of all the election fraud of these machines – .’

At this point, Sellers asked the show’s producers to get involved.

‘Can I ask our producers, can we get out of here, please? I don’t want to have to keep going over this. Newsmax has not been able to verify any of those allegations,’ Sellers said, as Lindell again shouted over him.

Sellers then stood up and stormed off camera.

Crash Bandicoot: On the Run! Has Over 100 Skins, but No Loot Boxes

A widow has been hit with a huge legal bill after losing a court fight with...