Fox News host Tucker Carlson isn’t backing down from his claim that the National Security Agency tried to leak his private emails to the press, inviting a guest on his show to say such an action would be a ‘serious federal crime.’

Carlson has said that his communications seeking an interview with Vladimir Putin were intercepted by the NSA, and his identity – which should by law have been kept a secret – was ‘unmasked’ by senior intelligence officials.

Carlson claimed that the content of his emails and texts was then disseminated to members of the media, in a bid to discredit him as an agent of Russia.

On his show on Thursday, Carlson spoke with legal scholar Jonathan Turley, a law professor at George Washington University.

‘If reporters were given that information, it would be even more serious because even if your email itself was not classified, the intercept is,’ said Turley.

‘NSA… material is heavily classified. I do national security work and it takes years for me to get access to a FISA warrant, I should say, or an NSA surveillance document,’ he added

‘So the mere fact that they engaged in surveillance is classified. So it would be a serious federal crime,’ said Turley. 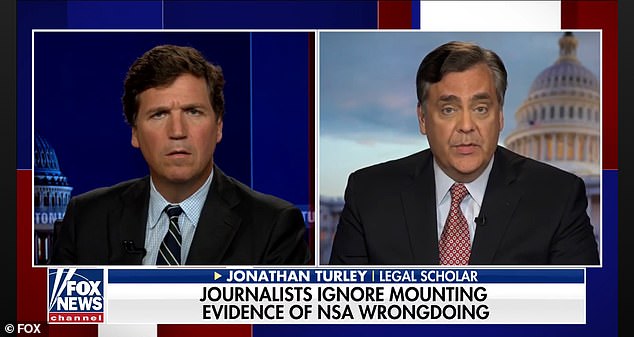 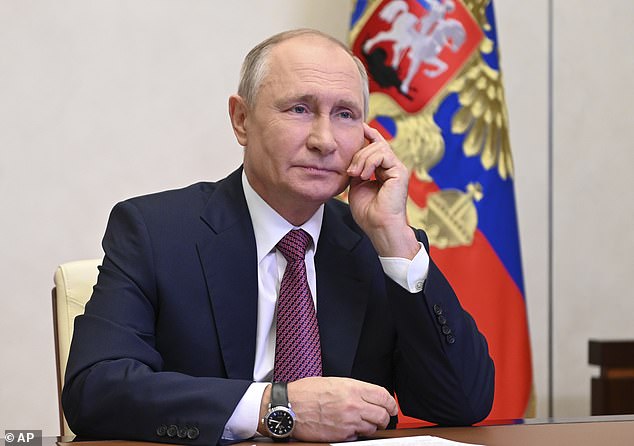 Carlson has said a whistleblower told him that the NSA intercepted his emails attempting to secure an interview with Putin, then spread the information in a smear campaign

The NSA is generally barred from spying on American citizens, unless the agency obtains a warrant from the secretive Foreign Intelligence Surveillance Court.

However, it is possible for the agency to collect the communications of Americans if they are in contact with a foreign surveillance target.

Turley said that there were a number of scenarios in which the NSA could have legally intercepted Carlson’s emails, but added: ‘that doesn’t explain the more troubling questions.’

‘How that information was circulated and also how your name was not masked,’ he said. Masking refers to the practice of redacting the name of U.S. citizens from intercepts, which the NSA is generally required to do.

‘Now, you can unmask people in a surveillance documents of that kind but it requires someone to ask for unmasking and there would be no legitimate reason to do so here,’ added Turley.

Carlson first revealed his allegations on June 28, saying that he had been alerted by a source in the intelligence community.

On his Wednesday show, Carlson revealed that he was trying to arrange an interview with Russian president Vladimir Putin when he ‘was spied on by the NSA’. 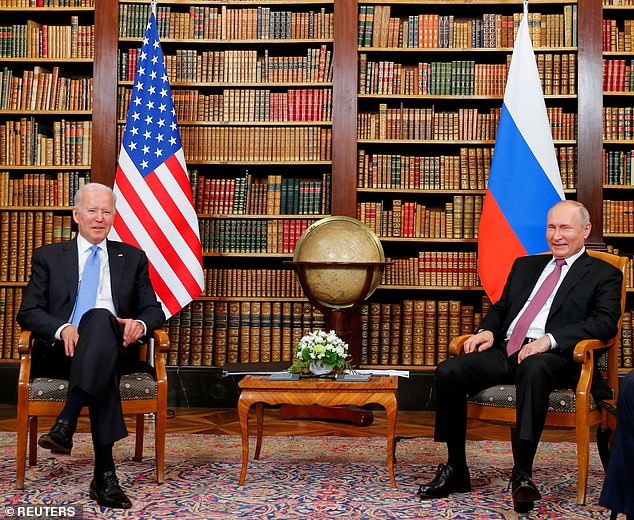 ‘Late this spring I contacted a couple of people I thought could help get an interview with the Russian President Vladimir Putin,’ Carlson told his viewers.

Trying to secure an interview with a world leader is routine journalistic practice, and should not have raised alarm.

‘I told nobody I was doing this other than my executive producer, Justin Wells,’ Carlson said.

‘I wasn’t embarrassed about trying to interview Putin. He’s obviously newsworthy. I’m an American citizen, I can interview anyone I want, and I plan to.

‘But still in this case I decided to keep it quiet. I figure that any kind of publicity would rattle the Russians and make the interview less likely to happen.

‘But the Biden administration found out anyway by reading my emails.’

Carlson said that, despite telling no one, apart from his producer, news of his efforts soon spread around Washington DC. 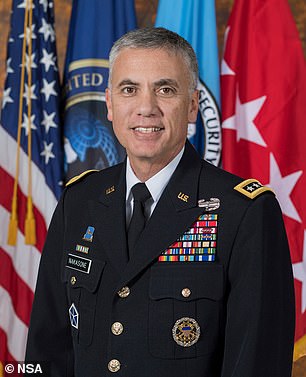 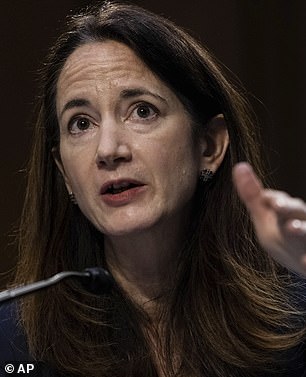 ‘I learned from a whistle-blower that the NSA planned to leak the contents of those emails to media outlets,’ he said. Earlier on Wednesday he said he had been approached at a funeral in Washington DC by someone who told him of the spying.

‘Why would they do that? ‘Well, the point, of course, was to paint me as a disloyal American, a Russian operative. I’ve been called that before, ‘ he said.

‘A stooge of the Kremlin, a traitor doing the bidding of a foreign adversary.’

Carlson on June 28 said he learned of the alleged spying on his show thanks to ‘a whistleblower within the US government who reached out to warn us that the NSA, the National Security Agency, is monitoring our electronic communications and is planning to leak them in an attempt to take this show off the air.’

Carlson said that the whistleblower ‘repeated back to us information about a story that we are working on that could have only come directly from my texts and emails.’

He added: ‘The Biden administration is spying on us. We have confirmed that.’

The NSA on June 29 responded with a highly unusual denial. The intelligence agency does not normally comment on its activities.

The NSA denied the targeting of Carlson, but did not deny that his communications were incidentally collected. 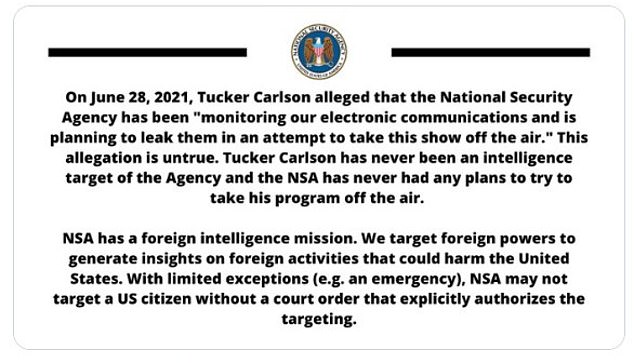 On June 29, the NSA denied that Carlson was ‘an intelligence target’ 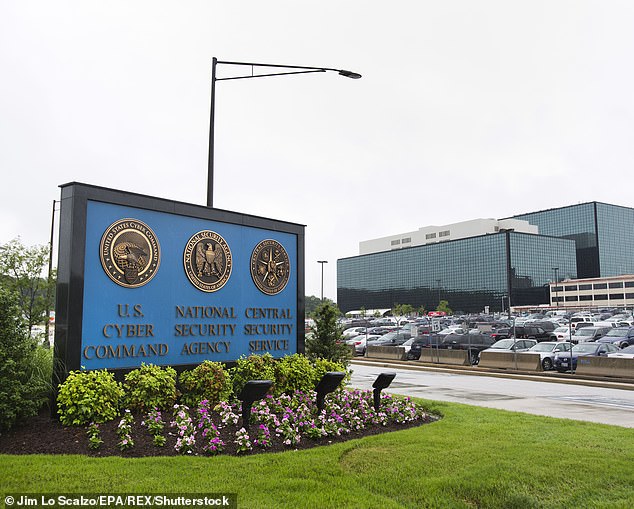 The NSA, in their June 29 statement, denied that Carlson had been deliberately targeted. But they did not deny that may have been incidentally swept up in their surveillance of foreign targets

They tweeted: ‘On June 28, 2021, Tucker Carlson alleged that the National Security Agency has been ‘monitoring our electronic communications and is planning to leak them in an attempt to take this show off the air.’

‘This allegation is untrue. Tucker Carlson has never been an intelligence target of the Agency and the NSA has never had any plans to try to take his program off the air.

‘NSA has a foreign intelligence mission. We target foreign powers to generate insights on foreign activities that could harm the United States.

‘With limited exceptions (e.g. an emergency), NSA may not target a US citizen without a court order that explicitly authorizes the targeting.’

Two of the youngest victims of the Surfside collapse shared a casket, priest says

Richard Branson goes to space with Virgin Galactic this SUNDAY