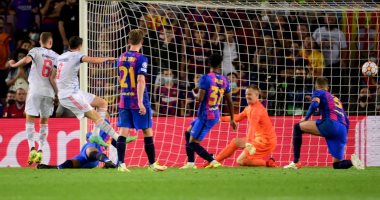 Yesterday, Tuesday, a large number of matches were held in various stadiums in the world, most notably the matches of the group stage of the European Champions League in its new season 2021-2022.

The goals of Tuesday’s matches in the world’s stadiums were as follows:

The German team Bayern Munich achieved a great victory over its Spanish host Barcelona, ​​by three goals without return, in the confrontation that brought them together on Tuesday evening, at the Camp Nou, in the first round of Group E of the Champions League for the current season 2021/2022.

The English team, Manchester United, suffered a fatal defeat against its Swiss counterpart, Young Boys, with two goals against a goal, in the match that took place between them on Tuesday evening, at the “Suis Wankdorf” stadium, in the first round of Group F of the Champions League for the current season 2021-2022.

The Italian team, Juventus, achieved a valuable victory at the expense of the Swedish Malmo 3-0 in the match that was held between them on Tuesday evening at the “Malmö Stadion”, as part of the matches of the first round of Group H of the European Champions League, in a match in which the Italian football representative is looking to correct the course in The era of the new technical director Massimo Allegri.

Juve’s goals were scored by Alex Sandro and Paulo Dybala from the penalty spot and Alvaro Morata, in the 23rd, 45th and 45th minutes, respectively.

Chelsea scored a difficult victory over its guest, Zenit Saint Petersburg, Russia, with a clean goal, in the meeting that brought the two teams together, on Tuesday evening, at Stamford Bridge, in the first round of Group H of the group stage of the European Champions League.

Sevilla and Austrian Salzburg tied 1-1 in the match that took place between them on Tuesday evening at the Ramon Sanchez Pizjuan stadium in the first round of Group G of the Champions League.

Birth has provisions in royal families.. Preventing the mother from breastfeeding her strangest child