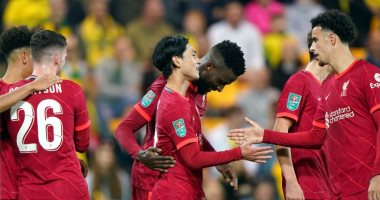 Yesterday, Tuesday, a large number of matches were held in various stadiums of the world, most notably the confrontations of the five major European leagues, in addition to the Egyptian Super Cup match, which was celebrated by scoring a large number of wonderful goals.

The goals of Tuesday’s matches in the world’s stadiums were as follows:

The Liverpool team qualified for the round of 16 of the English League Cup, after its victory against its host Norwich City, with three goals against a goal, in the match that brought the two teams together, on Tuesday evening, at the Carrow Road Stadium in the third round of the championship competitions.

The Egyptian star Mohamed Salah, the Liverpool striker, was absent from the basic and reserve formation, in order to rest in preparation for the important matches in the English Premier League competition as well as the European Champions League. Klopp also excluded many stars, led by Senegalese star Sadio Mane, Dutchman Virgil van Dijk and goalkeeper Alison.

The first goal came just 4 minutes after the start of the match through the Japanese Taki Minamino with a shot from inside the penalty area, after a pass from Belgian Divock Origi.

In the second half, Divock Origi added the second goal at the 50th minute, before Minamino scored his second and third goal for his team in the 80th minute, ending the match 3-0 in favor of the Reds.

Manchester City defeated Wycombe 6-1 in the match that was held between them on Tuesday at Al Ittihad Stadium in the third round of the Carabao Cup, to qualify for the round of sixteen of the competition that the Citizens holds.

Everton were knocked out of the Carabao Cup after losing on penalties to Queens Park Rangers, one of the second-tier clubs, 8-7, in the match that took place between them on Tuesday evening at Loftus Road.

Uruguayan star Luis Suarez snatched a valuable victory for his team, Atletico Madrid, at the expense of its host, Getafe, by 1-2, in the meeting that brought the two teams together, on Tuesday evening, at the “Alfonso Perez” stadium, in the opening of the sixth round of the Spanish League competition for the current season 2021-2022. .

Getafe finished the first half of the match with a clean goal, scored by Steven Mitrovic in the last minute, from a header to the right of Atletico Madrid goalkeeper Oblak.

It is Mitrovic’s first goal for the Getafe team that has scored against Al-Rokhy Blancos in La Liga since 2011, during the Argentine Diego Simeone’s tenure as coach of the team.

In the second half, Getafe midfielder Carles Elena received a direct red card in the 74th minute, after his violent intervention on the Atletico Madrid player, to complete the rest of the match with ten players.

Luis Suarez scored the equalizer in the 78th minute, after following Mario Hermoso’s cross, and shot it into the net to the left of the goalkeeper.

The Uruguayan star returned to score the winning goal in the first minute of stoppage time, to give his team 3 valuable points, after a goalless draw in the last round with Athletic Bilbao.

Inter Milan won a precious 3-1 victory over its host Fiorentina, in the exciting match that brought the two teams together, on Tuesday evening, at the “Artemio Franchi” stadium, in the fifth round of the Italian league “Calcio”, for the current season 2021-2022.